Remember, Remember the 5th of November 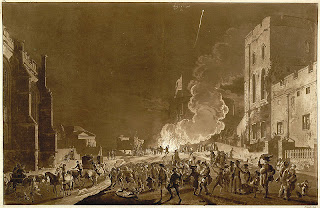 As we all know, November 5th is celebrated throughout Great Britain as Guy Fawkes Night: a celebration to commemorate the failed attempt made by Guy Fawkes and his fellow conspirators to blow up the English Parliament in 1605. As a devout Catholic, Guy Fawkes hoped that these actions would end the discrimination of Protestant England towards Catholics. Since that day, the 5th of November was commemorated throughout England with the burning in effigy of Guy Fawkes, along with a celebration of God's providence in protecting the Protestant King.

In colonial America, Guy Fawkes Night was celebrated as "Pope Day" (or "Pope Night"). Young men from New England would traditionally construct large wagons (with figures of the Pope, the Devil and other Catholic figures, along with unpopular British governing officials all to be burned in effigy), which were drawn throughout the public streets for all to see. The young men would even dress up and petition the affluent of the city for money which was used for getting drunk and having a "splendid supper." As Historian J.L. Bell (of Boston, 1775 fame) points out on his 5th of November website:

In the mid-1700s, the 5th of November was one of Boston’s most popular holidays. On that day, apprentices and young men paraded through town with giant effigies of the Devil, the Pope, and current political scapegoats, demanding coins from householders and passersby.

At nightfall, Boston’s North End and South End gangs met in the middle of town and brawled. The winners hauled away the other side’s paraphernalia and burned all the effigies in a festive bonfire. In 1764 the event became so violent that a young boy was killed, his head crushed by a wagon wheel.

In essence, "Pope Day" became yet another example of how Colonial American bred a culture of anti-authoritarianism. Pope Day evolved to become not only a day to mock Catholicism but a day to also express disgust with colonial (particularly British) government.

In addition, it is interesting to note who "Pope Day" gave birth to many of the traditional Halloween customs that are still in practice today. As Mr. Bell points out above (and throughout his website) the tradition of children running though the streets in costume asking for money, treats, etc. was most certainly a common practice on the 5th of November.

With that said, let us not forget the origins behind this anti-Catholic celebration. Guy Fawkes became, for many colonial Americans, the perfect scape goat for all their anti-Catholic rhetoric. The following poem helps to capture at least a portion of that popular anti-Catholicism:

A penny loaf to feed the Pope
A farthing o' cheese to choke him.
A pint of beer to rinse it down.
A fagot of sticks to burn him.
Burn him in a tub of tar.
Burn him like a blazing star.
Burn his body from his head.
Then we'll say ol' Pope is dead.
Hip hip hoorah!
Hip hip hoorah hoorah!
Posted by Brad Hart at 10:06 AM

What! No Mention of the movie "V".

This film uses the bombing of parliament and the date of Nov 5th to make a great point;

Thanks to all for being involved, Many Blessings, Shane (Hangmann747)