"From the Halls of Montezuma, to the Shores of Tripoli" 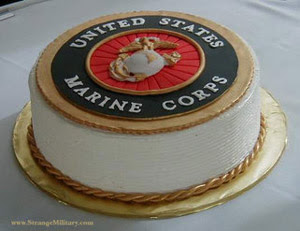 On this day in 1775, the United States Marines was born. Members of the Continental Congress, seeing that war with Britain was on the horizon, drafted a resolution calling for the establishment of "two battalions of Marines to be raised." The Continental Congress, gathered at Tun Tavern in Philadelphia, ratified the resolution, which officially commissioned the Continental Marines, "for the protection of the American colonies and to fight for independence at sea and shore." It was John Adams, the chief supporter of the bill, who pushed for the ratification of this resolution. As a result, it is Adams who should be given special recognition as being the "father" of the Marine Corps.

Here are some interesting tidbits of history on the Marines and their role in the Revolution from the History Channel's website:

Serving on land and at sea, the original U.S. Marines distinguished themselves in a number of important operations during the Revolutionary War. The first Marine landing on a hostile shore occurred when a force of Marines under Captain Samuel Nicholas captured New Province Island in the Bahamas from the British in March 1776. Nicholas was the first commissioned officer in the Continental Marines and is celebrated as the first Marine commandant. After American independence was achieved in 1783, the Continental Navy was demobilized and its Marines disbanded.

In the next decade, however, increasing conflict at sea with Revolutionary France led the U.S. Congress to establish formally the U.S. Navy in May 1798. Two months later, on July 11, President John Adams signed the bill establishing the U.S. Marine Corps as a permanent military force under the jurisdiction of the Department of Navy. U.S. Marines saw action in the so-called Quasi-War with France and then fought against the Barbary pirates of North Africa during the first years of the 19th century. Since then, Marines have participated in all the wars of the United States and in most cases were the first soldiers to fight. In all, Marines have executed more than 300 landings on foreign shores.

For more information on the birthday of the U.S. Marines click here.
Posted by Brad Hart at 12:27 AM

Thanks for your highlighting this day.

I remember my first November Tenth in the U.S. Marines. We feasted on stead, turkey, ham, chicken, shrimp, and all sorts of fixins. It was a great holiday.

Then, the next day--tomorrow--was a repeat as Armistice Day, Armed Forces Day, etc.

I wonder if the tradition is upheld today.