Christ Church Episcopal in Alexandria, Virginia is removing plaques to George Washington and Robert E. Lee because they apparently make some people feel "unsafe" and "unwelcome." While it's debatable whether a church should have a plaque or statue to any person, other than Christ, in its sanctuary, the reasons given for this change are driven not by a desire to enhance worship but rather by political correctness.

George Washington was one of the key founders of Christ Church Episcopal, and both his family and the Lee family had close ties to Christ Church. Accordingly, it seemed appropriate to earlier generations of Christ Church parishioners to honor both men. Not so today. And while I can understand people objecting to a plaque honoring Lee, I have no respect for any such objection to honoring the father of our country.

For more of my thoughts on this, I invite you to check out the following article at my blog...

William Livingston: The Brooding Omnipresence in the Sky ISN'T Christianity

Legal positivists who are on the Left, the Right, in the Center and libertarian don't believe in a "brooding omnipresence in the sky" at least not for purposes of constitutional interpretation.

The late Justice Scalia was one of these legal positivists. He was a devout Roman Catholic who personally believed in what his Church taught: the natural law of the Aristotlean-Thomistic tradition. His point was if legislatures wish to use that to inform their conscience when drafting and voting for legislation they are free to do so. Just as they are free to use the the Bible, Book of Mormon, the works of Immanuel Kant or whatever they wish.

I can't resolve the debate between the legal positivists and those who believe that a higher organic law undergirds our system and can be used in constitutional interpretation. Legal positivism predominates. I do believe that the reason why some very distinguished scholars dissent and believe in natural law and rights is that quotations abound from America's Founders demonstrating that they believed in the existence of such.

Christian nationalists think that it's Christianity that is the source of this higher law. After years of studying this, I don't think that's right. Though God does have a place in documents like the Declaration of Independence and Alexander Hamilton's "The Farmer Refuted," which are among the sources of the aforementioned quotations by America's Founders on their belief in the existence of the "brooding omnipresence in the sky."

We can add William Livingston's name to the list of Founders who denied that Christianity was the source of the omnipresence. Livingston was a framer of the US Constitution and played a key role in getting the document ratified in New Jersey.

The denial of Christianity as the organic law of America comes from Livingston as he commented on the Articles of Confederation. The Articles do invoke "the Great Governor of the World," but that wasn't good enough for John Mason who wanted language that the "law of the eternal God, as contained in the sacred Scriptures, of the Old and New Testament, [is] the supreme law of the United States,..."


And to have made the 'law of the eternal God, as contained in the sacred Scriptures, of the Old and New Testament, the supreme law of the United States,' would, I conceive, have laid the foundation of endless altercation and dispute, as the very first question that would have arisen upon that article would be, whether we were bound by the ceremonial as well as the moral law, delivered by Moses to the people of Israel. Should we confine ourselves to the law of God, as contained in the Scriptures of the New Testament (which is undoubtedly obligatory upon all Christians), there would still have been endless disputes about the construction of the of these laws. Shall the meaning be ascertained by every individual for himself, or by public authority? If the first, all human laws respecting the subject are merely nugatory; if the latter, government must assume the detestable power of Henry the Eighth, and enforce their own interpretations with pains and penalties.

[A]nd the inseparable connexion between the morals of the people and the good of society will compel them to pay due attention to external regularity and decorum; but true piety again has never been agreed upon by mankind, and I should not be willing that any human tribunal should settle its definition for me.

Post Script: For the full, easily accessible version of Livingston's letter, see here.
Posted by Jonathan Rowe at 11:14 AM 9 comments:

The issue is how the politics of the American Founding -- philosophy and theology included -- squares with "Christianity" (scare quotes meant to denote all of its inherit meanings).

There are too many points for me to address in a brief blog post; so I will choose to focus on one by Professor Deneen:


... Indeed, inasmuch as for Locke the first form of property is ownership of our own selves, protection of expression of selfhood is a predictable form of how our “diversity in faculties” is likely to find expression. And, as his 1792 essay on property makes clear, Madison’s understanding of property as exclusive possessions of individuals, which includes not only external wealth but also opinions and belief, is extensively the same as the Lockean view.

Reilly claims that Locke and Madison—in distinction from Hobbes and Machiavelli—are part of a continuous tradition that reaches back to ancient and Christian philosophy. However, one would be hard-pressed to find a justification of res publica from pre-modern thinkers that rests on the claim that protection of private differences is the “first object” of republican government. The classical tradition—expressed, for instance, in the writings of Aristotle or Aquinas—encouraged public-spiritedness, self-rule, concern for the common good, and cultivation of virtue as the essential elements of a polity or republic. While classical thinkers also recognized differences (and the potential for factions) as a major challenge, they commended the harmonization of differences and cultivation of virtue rather than promoting pursuit of private differences as the best avenue of avoiding political division. Indeed, the ancient Greeks reserved the word idiotes to those mainly concerned with private things. Classical thinkers encouraged the formation of small-scale regimes over large ones as more likely to promote participation in a shared common good. Aristotle argued for a limit to acquisition, believing that excess was as dangerous to civic and personal virtue as deficiency.

In calling for a large and extended republic, a relatively small political class whose ambition would promote national greatness, and a citizenry with a main focus on private pursuits, both Madison and Hamilton were cognizant that they were building a nation based on a new science of politics, as Hamilton readily acknowledges in Federalist 1 and 9.

I agree with Deneen that Madison, Hamilton, following Locke were positing something "new" that broke with the "classical" tradition that traces from Aristotle, whom America's Founders lauded, to Aquinas, whom they didn't.

However, the Lockean liberal tradition was one of a number of different core ideologies that made up the the synthesis of the origins of the American founding. Perhaps the "civic republican" ideological thought found in such thinkers as Harrington resonates more with the classical tradition from which Locke and Madison broke and adds balance to the perspective, especially to those who laud the classical tradition and wish to find more of it in the American founding.
Posted by Jonathan Rowe at 3:41 PM 5 comments:

What is the Judeo-Christian Tradition?

I saw John Fea link this a little while back. I think the term to describe the political theology of the American Founding is as problematic as any other competing ones. To hear George Washington tell the narrative, yes Jews and Christians worshipped the same God. But so too did Muslims and unconverted "Great Spirit" worshipping native Americans.


The inclination to incorporate Jewish thought into the fabric of society is noble and important, especially in light of political history. But some scholars point out that “Judeo-Christian,” unlike the term “Abrahamic,” can also serve to exclude other religious minorities, such as Muslims — which can have unwelcome implications. The term “Abrahamic” is more inclusive because all three major monotheistic religions trace their lineage to the figure of Abraham.

Personally I think "generic monotheism" gets at the political theology of the American Founding. But if the "generic" part makes it too weak, Dennis Prager's "ethical monotheism" will do.
Posted by Jonathan Rowe at 11:03 AM 3 comments:

Check out this new article by Mark David Hall at the ISI site discussing how the "Deism" dynamic of the American Founding has been exaggerated. A taste:


But even if the Founders discussed above were all clearly deists, what would that say about the founding generation? Consider for a moment the background and experiences of these men. Washington, Jefferson, and Madison were wealthy Anglican plantation owners. Hamilton was born and raised in the British West Indies, and Paine was born and raised in England. In an era when few people travelled internationally, Jefferson and Adams spent significant time in Europe, and Franklin lived most of the last thirty-five years of his life in Britain and France. Needless to say, these men are not representative of late-eighteenth-century Americans.

When one turns from these few select Founders to the broader constellation of men and women who played significant roles in winning American independence and creating America’s constitutional order, the proposition that the Founders were deists becomes impossible to maintain. ...

Hall does solid work. Though no one's scholarship is perfect. But to (admittedly) "nitpick," Hall then lists a bunch of "orthodox Christians" that outnumber the "deists." He includes Abigail Adams in his list of orthodox Christians. She wasn't. She just as militantly rejected the Trinity as did her husband.

This is an article from Thomas Kidd published in Baylor Magazine on Ben Franklin. Kidd also does solid work. A taste:


... The text of the unamended Constitution is notably secular, save for references like the “Year of our Lord” 1787. But the lack of religion in the document does not mean the topic went unmentioned.


Several weeks into the proceedings, the octogenarian Benjamin Franklin proposed that the meetings open with prayer. “How has it happened,” he pondered, according to a copy of the speech in Franklin’s papers, “that we have not, hitherto once thought of humbly applying to the Father of Lights to illuminate our Understandings?”

We've heard the story and seen the quotation from Franklin at the Constitutional Convention many times. They were deadlocked and Franklin suggested that they pray. He did so using language that suggested belief in an active personal God.

So I often see Christian nationalists framing the issue as though, "see even the supposed 'deist' Ben Franklin was prayerful."

But here is the funny thing. We are assuming Franklin is the less than fully orthodox outlier, as the Christian nationalists narrative suggests he was the least conventionally religious man in a room full of devoutly orthodox Christian men who were writing a Constitution based on biblical principles.

So look at what Franklin wrote about the men in this room. From Kidd's article:


Even stranger, few convention attendees supported the proposal. A couple of devout delegates seconded his motion, but it fizzled among the other participants. Franklin scribbled a note at the bottom of his prayer speech lamenting, “The Convention except three or four Persons, thought Prayers unnecessary!”

And what does it say about a room full of mostly, or with a few exceptions, "orthodox Christian" men that they thought prayers unnecessary to resolve their deadlock?
Posted by Jonathan Rowe at 12:21 PM 4 comments:

GWash, October 3, 1789: "Whereas it is the Duty of all Nations to acknowledge the Providence of Almighty God..." 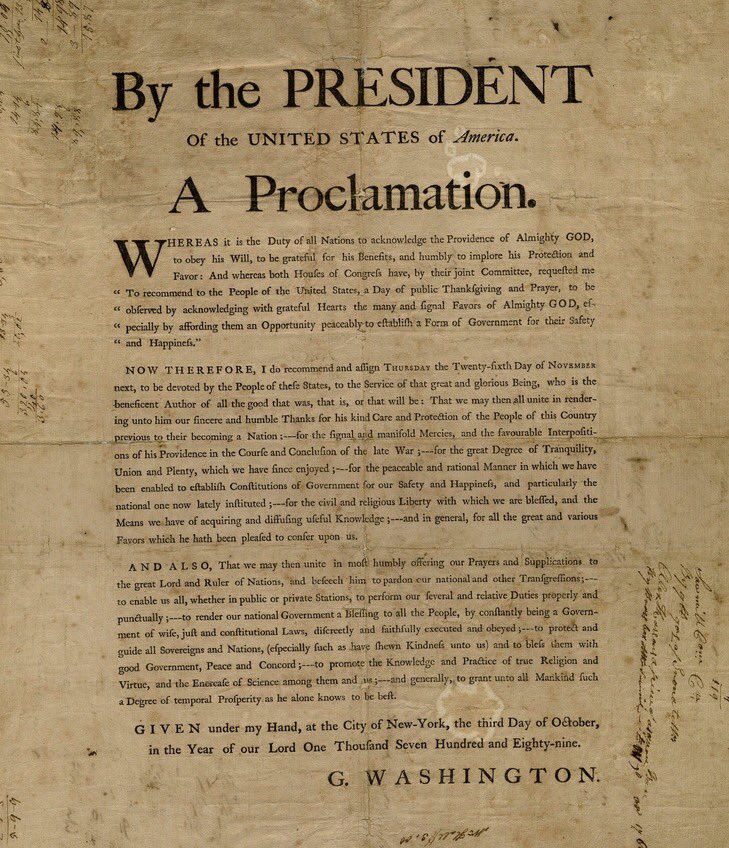