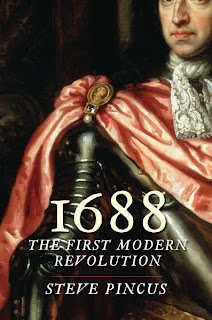 Here's a book that the readers of American Creation might be interested in: 1688: The First Modern Revolution by Steve Pinctus (who is a professor of history at Yale University) attempts to look at the Glorious Revolution's influence from a world-wide perspective as opposed to the traditional view of it being an un-revolutionary revolution—bloodless, consensual, aristocratic movement. Here's a brief synopsis from Yale University Press:

By expanding the interpretive lens to include a broader geographical and chronological frame, Pincus demonstrates that England’s revolution was a European event, that it took place over a number of years, not months, and that it had repercussions in India, North America, the West Indies, and throughout continental Europe. His rich historical narrative, based on masses of new archival research, traces the transformation of English foreign policy, religious culture, and political economy that, he argues, was the intended consequence of the revolutionaries of 1688–1689.

James II developed a modernization program that emphasized centralized control, repression of dissidents, and territorial empire. The revolutionaries, by contrast, took advantage of the new economic possibilities to create a bureaucratic but participatory state. The postrevolutionary English state emphasized its ideological break with the past and envisioned itself as continuing to evolve. All of this, argues Pincus, makes the Glorious Revolution—not the French Revolution—the first truly modern revolution. This wide-ranging book reenvisions the nature of the Glorious Revolution and of revolutions in general, the causes and consequences of commercialization, the nature of liberalism, and ultimately the origins and contours of modernity itself.
Posted by Brad Hart at 2:11 PM

This is right in line with this month's Cato Unbound series that Jon keeps referencing. Interesting topic I think I will check the book out.

Is there any attempt by Pincus to equate America's present encounter with globalism?