Of all the animosities which have existed among mankind, those which are caused by a difference of sentiments in religion appear to be the most inveterate and distressing, and ought most to be deprecated. I was in hopes, that the enlightened and liberal policy, which has marked the present age, would at least have reconciled Christians of every denomination so far, that we should never again see their religious disputes carried to such a pitch as to endanger the peace of Society.

Over a decade ago I found a passage written by James Burgh (in "Crito") wherein he gives an account of his Arianism. Burgh was an English Whig writer who influenced America's founders. Among other things, he arguably served as the intellectual intermediary between Roger Williams and Thomas Jefferson regarding the term "separation of church and state." Jefferson got it from Burgh; Burgh got it from Williams.

I found of interest Burgh's use of the term "quaternity." As he wrote:

... The papists have thought proper to put the Virgin Mary into the Tr---ty, and call her the complement, or completing of it. That is, the F----r, the S-n, the H--y Gh--t, and the Virgin Mary, the undivided mystical four, or three, which is the same (for in a mystery, three is the same as four, and four the same as one; finite the same as infinite; human the same as divine) the mystical four, I say, are the tr---ty, or rather quaternity, that is, four different beings, some infinite, some finite, some mortal, some immortal, are only three beings, and these three-four beings, are the One, indivisible, simple, unoriginated Spirit, the first cause and fountain of being.
No Protestant holds the Virgin Mary, who has these many ages been dead and rotten, to be any part of the immortal God. This is out of the question. But I would imagine, that to a person who denies the Athanasian doctrine, it should not appear a whit more absurd to put the Virgin Mary into the Tr---ty, or Godhead, than any other being whatever. All beings are equally different from and inferior to the Supreme; the S-n as much as the virgin; the virgin as much as a worm. ...

This old school, Enlightenment era, unitarian logic argues Roman Catholic doctrine is responsible for the error of Trinitarianism and sees a connection between Marianism and Trinitarianism. It argues the Trinity is as logically sound as the Quaternity. With Mary of course as the 4th Person in the Godhead. A short time later John Adams would write:

The Trinity was carried in a general council by one vote against a quaternity; the Virgin Mary lost an equality with the Father, Son, and Spirit only by a single suffrage.
-- John Adams to Benjamin Rush, June 12, 1812.

I would bet Adams got this sentiment from Burgh.
Posted by Jonathan Rowe at 10:45 AM 8 comments:

Fea: "Jack Hibbs dabbles in American history and it is a disaster. We need another Dudley Rutherford moment!"

From Professor John Fea. It's about celebrity pastor Jack Hibbs "dabbling" in American history. Check it out here. A taste:

13:11 to 13:26: Hibbs suggests three things about George Washington. First, Hibbs says that the First Great Awakening influenced George Washington’s religious life. Hibbs should actually tell his congregation that Washington’s theological beliefs, if he had any such beliefs beyond his vague references to “Providence,” would disqualify him for the Calvary Chapel-Chino Hills elder board. There is no evidence that the Great Awakening influenced Washington in any way. Second, Hibbs said that when Washington attended church he listened to abolitionist sermons. Not really. Anglican ministers in Virginia did not preach abolitionist sermons. Third, Hibbs says, abolitionist preachers somehow convinced Washington to free his slaves. Wrong again. More on this below.
13:26 to 13:57: Based on this inaccurate view of Washington’s religious faith and how he supposedly applied it to the problem of slavery, Hibbs says that Washington did not free his slaves during his lifetime because he wanted to protect them. If he freed them, Hibbs says, they would have faced ‘certain death” by a slaveowner on a neighboring plantation. (Apparently this other slaveowner was not attending the same “abolitionist Anglican” congregation as the Washington family.) Hibbs also assumes (wrongly) that things got a lot safer for freed slaves after Washington died. In other words, Hibbs is claiming that Washington wanted to protect his slaves from certain death while he was alive, but after he died he didn’t care anymore. This is a mess. 1
3:57 to 14:32: Hibbs is on a roll. The more passionate he gets, the more he plays fast and lose with American history. ...

Use yours bravely. Wisely. Gratefully. 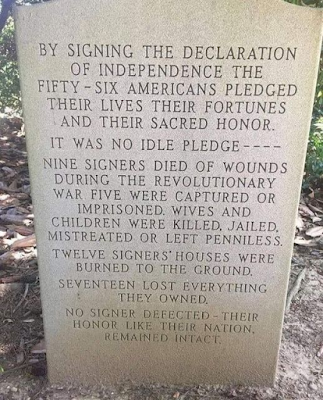