"The Search For Christian America," Misuses of History 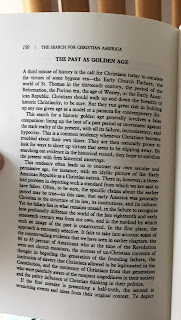 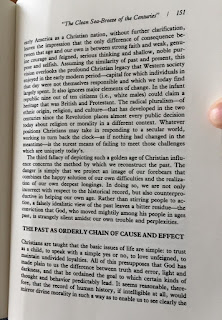 I was rereading this classic by Drs. Noll, Hatch and Marsden. And this passage from pages 150-51 struck me as especially relevant.

The book is remarkable in how it got three extremely important authorities together to write such. It wasn't just Mark Noll, who is a legend in his own right, but also Nathan O. Hatch and George Marsden.

Dr. Hatch is, if I'm not mistaken, the high paid college President in America, currently.

The book is strongly recommended.
Posted by Jonathan Rowe at 1:19 PM 1 comment:


But the purposes underlying the Establishment Clause go much further than that. Its first and most immediate purpose rested on the belief that a union of government and religion tends to destroy government and to degrade religion.

Some might balk at this as not representing the American Founding; but as I noted in the comments, I think it does, with a slightly exaggerated tone, represent the so called "Virginia view" on establishments articulated by Madison, Jefferson and some others.

The problem would be there were other competing views that were accepting of mild establishments compatible with religious liberty. This has been termed the "Massachusetts view" and has support from John Adams, Patrick Henry, and arguably George Washington.

I think Franklin's views are closer to the VA view, or what is quoted above by Justice Black.

Can anyone see anything in principle different in Franklin's and Black's positions? I don't.


I am fully of your Opinion respecting religious Tests; but, tho' the People of Massachusetts have not in their new Constitution kept quite clear of them, yet, if we consider what that People were 100 Years ago, we must allow they have gone great Lengths in Liberality of Sentiment on religious Subjects; and we may hope for greater Degrees of Perfection, when their Constitution, some years hence, shall be revised. If Christian Preachers had continued to teach as Christ and his Apostles did, without Salaries, and as the Quakers now do, I imagine Tests would never have existed; for I think they were invented, not so much to secure Religion itself, as the Emoluments of it. When a Religion is good, I conceive that it will support itself; and, when it cannot support itself, and God does not take care to support, so that its Professors are oblig'd to call for the help of the Civil Power, it is a sign, I apprehend, of its being a bad one. But I shall be out of my Depth, if I wade any deeper in Theology.

On Monday I saw friend of American Creation, Mark David Hall speak at Cairn University (geographically, in my backyard practically). He spoke on his forthcoming new book -- which I can't wait for -- that joins among others John Fea and Gregg Frazer on the "Christian America" question.

I don't think such contradicts the notion that Christian principles nonetheless were profoundly influential in a variety of ways in the American founding. It's a Christian principle after all to draw a distinction between the secular and the sacred, between Caesar and God.
Posted by Jonathan Rowe at 7:49 AM 5 comments: