NY Mag: "AOC Thinks Concentrated Wealth Is Incompatible With Democracy. So Did Our Founders."

You can read the link here. It relies mainly on Thomas Jefferson and James Harrington to represent "our Founders." Historian Kevin Gutzman, writing on Facebook noted:

George Washington was the wealthiest president of the United States. A recent study of the question estimated his wealth at approximately $5B. Article II of the Constitution was written with him in mind, and in both 1789 and 1792, he won unanimous Electoral College victories.

On the other hand, James Madison wrote extensively of "agrarian laws" (that is, government redistribution of wealth), which he considered both harmful and immoral.

Thomas Jefferson's criticism of the French nobility was of a legally privileged class. There is no such class in today's United States.

In short, this story is bunk.

(Rep. Ocasio is a walking advertisement for Jefferson's insistence that prior to citizenship, Americans should be taught the history of republican regimes--so that they could avoid repeating the mistakes that had led prior ones to fail.)

I agree that the author's thesis ultimately fails; it was too broadly stated. However, I wouldn't write it off entirely as "bunk." That's because, as I noted in the comments, some notable "republican" thought both on the Continent, but more importantly in Great Britain was in favor of such sentiment and I think such policies were implemented in various cases.

James Harrington who was referenced in the original piece really did believe in Agrarian redistribution and he really was influential on America's founders. And Jefferson DID flirt with such sentiment as Harrington's. It probably was his friend Madison who convinced him that these ideas were unwise. Madison's vision prevailed at the time of the American founding.

But Harrington's vision perhaps prevailed in the modern era of Western Civilization. That is, when we focus, not just on America, but Western Europe and the other industrialized nations.  The "modern world" as Eric Nelson puts it. That's one of his core theses and he pins such present day redistributionist policies on the Hebrew Bible.


Agrarian Laws and similar legislation have created little but trouble since Roman times, but every government since has, in one way or another, engaged in such legislation. It's simply too easy and appealing to engage in what amounts to massive payoffs to influential factions.

This post features another one of those letters that contain multiple points about one of America's founders' religious beliefs. Ben Franklin's exact faith can be hard to pin down. He was not, I have concluded, a "sola fide" Protestant. Or a strict deist. But he also didn't think, like J. Adams and Jefferson did, that "works" were all that counted. Or perhaps in a sense he did.

You see Franklin didn't think that HIS good works merited Heaven, but he thought God would let him in anyway. What that means is that Franklin, like orthodox Catholics and Protestants (and others) thought ultimately God's unmerited grace would get him in. But Franklin also intimated that there were some better than him who perhaps could work their way into Heaven? That's part of what I get out of the quotation featured below.

How does Jesus and "faith" figure in? To Franklin faith was a means to the end of virtue. Good works were an essential component of Franklin's belief in "justification" (if you want to call it that). I don't think Franklin thought Jesus to be an Incarnate God, 2nd Person in the Trinity; in fact he admitted that he "doubted" such a thing. But he did think Jesus the greatest moral teacher of all time. So it stands to reason that if the purpose of faith is morality and Jesus is the greatest moral teacher, various forms Christianity would be valued for that reason.

I don't believe Franklin thought God's "grace" needed to be "channeled" through Christ's atonement. Rather the unmerited grace that got Franklin into Heaven was some kind of mysterious gift of God. Franklin differed with the "orthodox" there.

In a letter he wrote in 1753 (and later sent a copy to Ezra Stiles in 1790) where Franklin conceded that he didn't think his good works merited him Heaven, he also described what he saw as Jesus' role, quoting Jesus Himself.


He profess’d that he came not to call the Righteous but Sinners to Repentance; which imply’d his modest Opinion that there were some in his Time so good that they need not hear even him for Improvement;...

This sentiment comports 100% with Jesus as greatest moral teacher, and 0% with orthodox theology. He blatantly said there were some in Jesus' time, so righteous that they didn't need Him.

Think of Ben Hur, who in the story met Jesus at the end and converted. Franklin probably wouldn't have had a problem with this righteous man meeting and following the greatest moral teacher. He probably thought they had a lot in common. However, Franklin would not have thought Ben Hur necessarily needed Jesus.
Posted by Jonathan Rowe at 10:17 AM 3 comments:


We do not expect to be “Saved” or damned for Unitarianism, or any other Philosophical or metaphiscal or Theological opinions; but by Sincerity Candour Charity Benevolence and Beneficence: or their Contraries.

Adams is talking to his namesake son and future President about differences in their theologies. The elder Adams is a Unitarian. The younger is a Calvinist.
Posted by Jonathan Rowe at 9:04 AM 9 comments:

From this post in 2017, Thomas Kidd examines "Ron Chernow’s extraordinary 2010 biography of Washington" and makes some observations about George Washington's faith. A taste:

For his own part, Washington’s Anglican faith was moderate and utterly reserved. That is how we should account for Washington’s irregular church attendance and his failure to take communion, Chernow explains. He never liked to make a public show of his own faith. This is also the reason why Chernow doubts that Washington was ever seen praying as depicted in the popular painting “George Washington in Prayer at Valley Forge.”
“The reason to doubt the story’s veracity is not Washington’s lack of faith,” Chernow writes, “but the typically private nature of his devotions.” Chernow’s portrayal of Washington’s near-secretive faith seems quite plausible, although it would still not account for Washington’s strange decision hardly ever to utter or write the name of Jesus Christ in his thousands of surviving letters and public statements.

Yes this is true. In the perhaps 20,000 pages of words that George Washington left us, the name "Jesus Christ" is mentioned only once by name and one other time by example. Both in public addresses written by aides, but given under Washington's hand. In none of Washington's private letters is the name or example of Jesus Christ invoked. Though more generic God words are replete throughout Washington's recorded public and private words.
Posted by Jonathan Rowe at 11:07 AM 38 comments:

What Was Unique About the American Founding and Religion

The American founding had a number of novel things to it. Though it wasn't entirely novel. For instance, the American Revolution wasn't quite as novel as say, the French Revolution which it inspired. On religion (correct me if I am mistaken), every single modern Western European nation state at the time was in some way formally connected to an official Christian sect.

At the state level, America post founding still retained some "state established" churches, which were on their way out.

But at the federal level, there was nothing. George Washington, America's first President, was like many founders, formally/nominally affiliated with the Anglican then Episcopalian Church. "The Church of England" against which America had then separated.

When Washington spoke to the different religious "factions," he had a method of seeming to be all things to all people. For instance, recent events remind of us of Islam's place in the mind of America's founders. With the assistance of his Secretary of State, Thomas Jefferson, Washington delivered remarks to Morocco where he claimed to "adore" (his word) the same God as the Muslim leader.

Now, one could write this off as something "diplomatic." Perhaps it was. It's certainly the kind of sentiment today that leaders in pluralistic societies use. But back then, before America, every single head of state was connected to an official church. And it was expected that in their public utterances, they would endorse that particular brand of faith. Not generic, bridge building, monotheism.

That's something that arguably Washington and the other early American Presidents invented. And perhaps they were so effective at it because such a sentiment mirrored their privately held religious convictions which focused more on commonly held doctrines of monotheism and virtue, while if not downplaying, outright removing other more divisive sectarian "doctrine."
Posted by Jonathan Rowe at 10:14 AM 10 comments:


Missing from the current "happy face" reporting on new congresspersons swearing in on "Jefferson's Qur'an" is that his 1764 edition of the translation by George Sale is accompanied by a preface that is highly critical of Islam as serious religion. 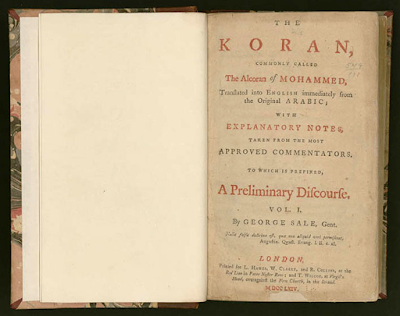 The Protestants alone are able to attack the Koran with success; and for them, I trust, Providence has reserved the glory of its overthrow.


...for how criminal soever Mohammed may have been in imposing a false religion on mankind...


The Qur'an of course, borrows liberally from the stories of the Bible and indeed contains many common sense truths of its own; thus the cover page itself quotes St. Augustine, "Nulla falsa doctrina est quae non aliquid veri permisceat," that is, “There is no false doctrine that does not contain some truth.”

So the front page of the very "Jefferson Qur'an" these folks are swearing upon calls its contents "false doctrine" mixed with some truth. The irony is complete. And so it goes also in our current world of "news": We may get the truth, but seldom the whole truth.

So Rep.-elect Rashida Tlaib (D-Mich.) will be sworn in using Thomas Jefferson's copy of the Koran. There is a myth going around that Jefferson owned a copy of that book because he wanted to better understand the enemy.

The problem with this claim is that it is not true. I've studied the Founding record meticulously and found NO evidence that Jefferson was interested in the Koran because he saw Islam as an ENEMY faith or to better understand a threat.

That's not to say that certain Islamic forces didn't cause threats and other problems for Jefferson and other Founders. The best someone like Robert Spencer could argue is that the Founding Fathers were naive for NOT concluding Islam qua Islam was a threat.

Read the Treaty of Tripoli where the Founders conceded the American government was not in any sense founded on the Christian religion and as such they sought peaceful relations with Muslims.

Jefferson, J. Adams, Franklin and Washington all thought Jews, Christians and Muslims worshipped the same God. The Founding Fathers arguably saw Roman Catholicism as more of a threat than Islam. And they were far more concerned with the persecution and bloodshed that in-fights among Christian sects had been causing than from Islam.
Posted by Jonathan Rowe at 1:17 PM 16 comments: