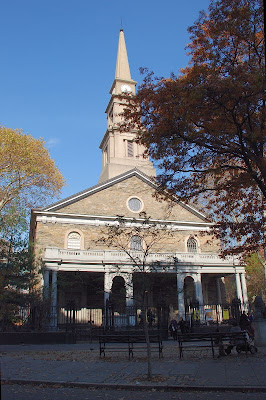 Apropos of nothing, I’d like to share a few photos I shot Monday in New York City.

It was a gorgeous 70 degree day. We’re so far into autumn that I don’t think this weather can be called “Indian Summer.” We were gathered at St. Mark’s Church in-the-Bowery for the Service of Commemoration and Grave Marking to honor Daniel D. Tompkins (1774-1825), Vice President of the United States, Governor of the State of New York, and Sovereign Grand Commander of the Ancient Accepted Scottish Rite of Freemasonry. The project was initiated by the New York City Chapter of U.S. Daughters of 1812, and the Freemasons of New York became involved. But more on this later. 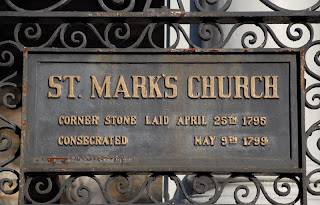 St. Mark’s Church in-the-Bowery is one of the oldest churches in Manhattan, and it is in fact the final resting place of a number of the city’s oldest Dutch settlers, including Petrus “Peter” Stuyvesant himself, a man who I’m sure needs no introduction here on American Creation. 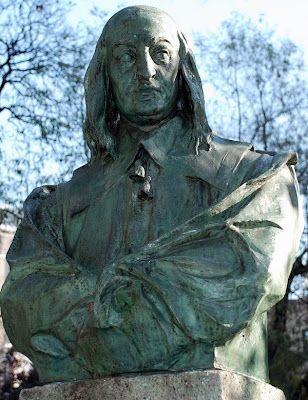 The plaque beneath the bust of Stuyvesant reads:

This bust was given to the people of New York
in trust of
St. Mark’s in-the-Bouwerie
in 1915 by
Wilhelmina Queen of the Netherlands

From the Commissie Boek of the States General

The States General of the United Netherlands to all
those to whom these presents shall come or who shall
hear them read, health. Be it known whereas we have
deemed it advisable for the advancement of the affairs
of the General Incorporated West India Company not
only to maintain the trade and population on the coast
of New Netherland and the places situate thereabout,
also the islands Curacao, Buenaire, Aruba, and their
dependencies, which have hitherto been encouraged
thither from this country, but also to make new
treaties and alliances with foreign princes and to inflict
as much injury as possible on the enemy in his forts and
strongholds as well by sea as by land for which purpose
it becomes necessary to appoint a person director we
therefore, confiding in the probity and experience of
Petrus Stuyvesant formerly entrusted with our affairs
in, and the government of, the aforesaid island of Curacao
and the places thereon defending, we being well pleased
with his services there, have commissioned and appointed,
by these presents do commission and appoint the said
Petrus Stuyvesant director in the aforesaid countries
of New Netherland, and the places thereunto adjoining,
together with the afore-mentioned islands of Curacao,
Buenaire, Aruba, and their dependencies, to administer with
the council as well now as hereafter appointed with him
the said office of director both on water and on land
and in said quality to attend carefully to the advancement,
promotion, and preservation of friendship alliances, trade
and commerce; to direct all matters appertaining to traffic
and war, and to maintain, in all things there, good order
for the service of the United Netherlands and the General
West India Company to establish regularity for the safeguard
of the places and forts wherein, to administer law and
justice as well, civil and criminal, and moreover to perform
all that concerns his office and duties in accordance with
the charter and the general and particular instructions
herewith given, and to be hereafter given him, as a good and
faithful director is bound and obliged by his oath in our
hands to do which done we therefore order and command
all other officers, common soldiers, together with the
inhabitants and natives residing in the aforesaid places
as subjects and all whom it may concern, to acknowledge
and obey the said Petrus Stuyvesant as our director
in the countries and places of New Netherland and
in the islands of Curacao, Buenaire, Aruba and their
dependencies, and to afford all help, countenance and
assistance in the performance of these things as we have
found the same to be for the advantage of the Company
done in our assembly at the Hague, on the XXVIII July 1646.