March 10, 1797: George and Martha Washington leave the President's House in Philadelphia for a much-anticipated retirement at Mount Vernon.

To celebrate George Washington's retirement from the presidency, Philadelphia displayed a life-size painting showing Washington leaving a sword and helmet—symbols of power—at America's feet as he gestures towards Mount Vernon. 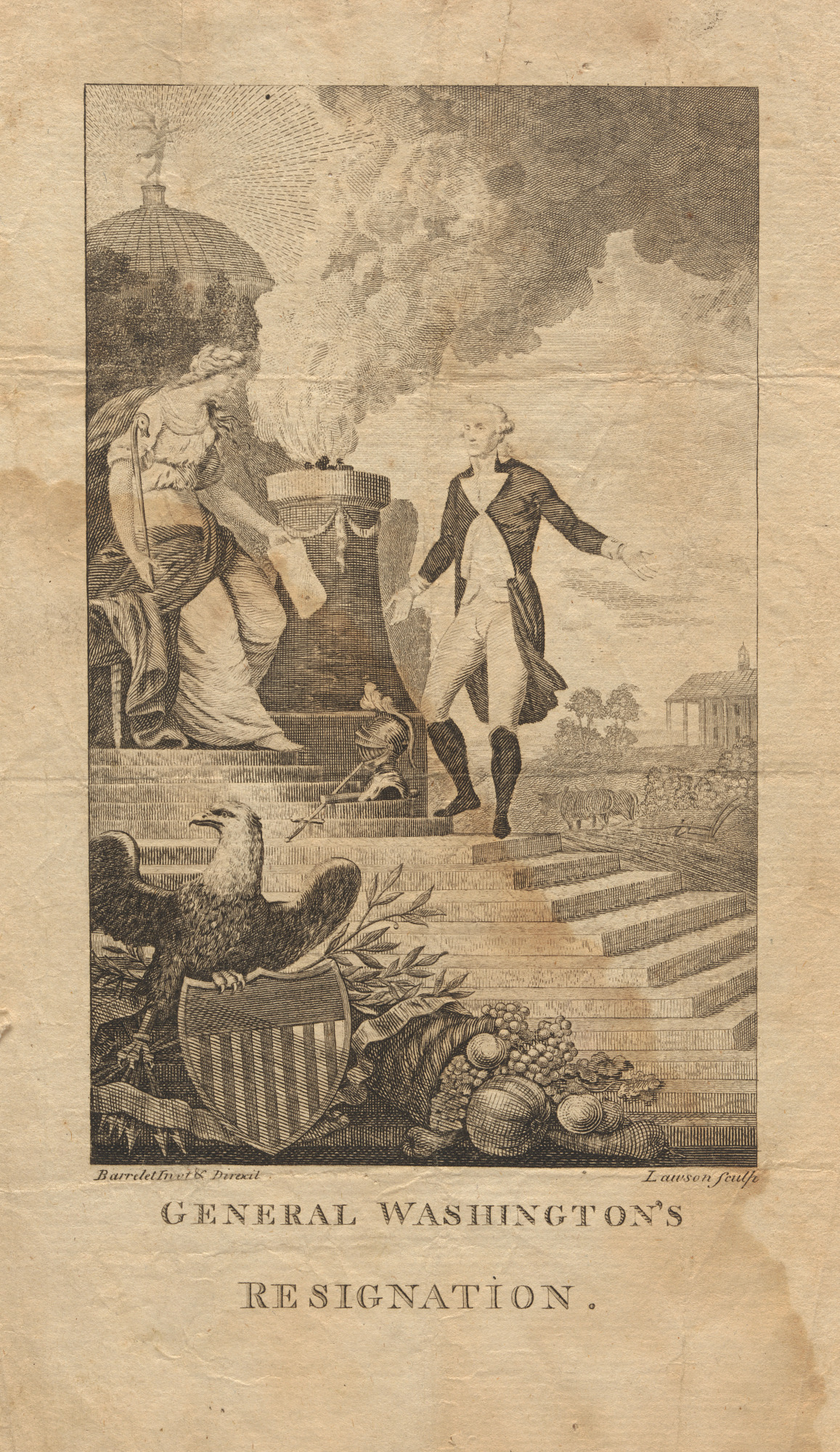 'General Washington's Resignation' (engraving) by Alexander Lawson, John James Barralet. Circa 1799.
Posted by Tom Van Dyke at 2:04 AM No comments:

Philip Hamburger's book "Separation of Church and State" turns 20 years old in 2022. Hamburger is a brilliant scholar and Ivy League Professor of Law (Columbia), and as such his work is always well worth engaging.

But over the years that I've engaged with this work in particular, I've noted how, as meticulously researched as the book is, it makes very contentious, even if interesting arguments. In 2020, writing in Newsweek, Hamburger summarizes his book in the context of an op-ed about Justice Amy Barrett's then confirmation hearings.

I strongly recommend people read the article for a summary of the book and if further interested in the history of legal church/state relations in America, read his book.

His book gores certain oxen and vindicates others. If one is a fan of Justice Hugo Black's opinion in Everson v. Board of Education (1947), one's ox is going to be gored. On the other hand, if one is a Roman Catholic seeking a lower or non-existent "wall of separation" complete with a largely accurate history of how certain forces in America have subjected Catholics to animus, the ox vindicated.

But -- perhaps this is a message he didn't intend to impart to religiously conservative Protestants who might be sympathetic to his anti-Everson position -- he makes that de facto establishment look very bad in how they used their political power over church-state relations. He basically tars "Protestant Christian America" with animus or bigotry.

Now, perhaps "Protestant Christian America" is guilty of such bigotry. World history is replete with examples of sectarian mistreatment among social groups taking place within national boundaries in a variety of different contexts. The problem, as I see it in Hamburger's particular claim, is that such simply isn't relevant to how the Establishment Clause ought to operate today or whether the Everson case was rightly decided.

There were two poles to the theological-political wings of Protestantism in America: the Right wing, who were more traditionally orthodox (either Calvinistic or some other kind of non-Calvinistic, evangelical types) and the Left who were either Unitarian or doctrinally lax. Often it's hard to tell the difference between the two, because they were all "Protestant Christians" and in many cases they may have attended the same churches. Hamburger clearly goes after the "liberals" more so. One chapter to his book is entitled, "A Theologically Liberal, Anti-Catholic, and American Principle."

Then, the historical villainy that Hamburger so meticulously documents becomes epitomized in a single figure: Justice Hugo Black, author of the Everson opinion. Justice Black was born in Alabama in 1886 and was raised and educated as a Baptist. Somewhere along the way he joins the KKK, has a distinguished political career, ends up on the Supreme Court of the United States and according to his biographer, older, sometimes attended services, with his wife, at the local Unitarian Universalist Church.

On the Court he votes both FOR Brown v. Board of Education (1954) AND Everson. Justice Black's "liberalism" in life and on the Court -- however "Protestant" it was -- was hardly "Klanish." Even though the facts Prof. Hamburger reports are largely accurate; I see this as the weakest part of his book.

As my friend the late Ed Brayton noted, it's poisoning the well or the genetic fallacy.