Francis Hopkinson was one of America's founders -- a "Founding father." He was not a "key founder" however (meaning that he's one that most people don't remember).

He may also have been a unitarian. What I have discovered over the many years of researching America's founders personal religious views is that virtually all of were in some way formally connected with a church that had a Trinitarian creed. But we really don't know what they believed in until we dig a little deeper into the record.

Theological unitarianism was "en vogue" amongst some of the more "philosophically minded" theists.

I came upon a passage from Hopkinson where I thought he identified himself as an anti-Trinitarian. However, reading the passage in context Hopkinson appears to be speaking of someone else, perhaps a fictitious character. A "cobbler."

ON my arrival in this country, I was much chagrined to find that the doctrine of the Trinity was generally received and professed; a doctrine against which I had acquired the strongest antipathy from my master, the great philosopher. However, as war raged in the country, there was no time for theological disquisitions; and as the justice of the war was clearly on the side of the Americans, I resolved to take an active part in their cause, and enlisted myself a soldier in the Pennsylvania line. I went through inexpressible toil and danger, in marches, counter-marches, skirmishes and battles, and was finally wounded at the siege of York-Town, when lord Cornwallis and his army surrendered to the allied forces of France and America.

After the peace, I supported myself by cobling and patching, and employed my leisure hours in combating the doctrine of the Trinity, and devising grand schemes for public utility.

Washington and Jefferson: Both Nominal Anglicans

Thomas Jefferson was also a vestryman in the Anglican church and attended church regularly throughout his life, but Lillback would never draw the conclusion that Jefferson was an orthodox Christian. This fact leads us to believe that the major premise is obviously false.

Washington was a nominal Episcopalian (the Anglicans renamed after the Revolution) who attended church irregularly, ceasing after his retirement. His diaries show that he frequently dishonored the Sabbath. We learn from one entry that he would have collected his rents on Sundays, but he declined because the people living on his land were “apparently very religious.”

The weakest arguments in the book are the ones devoted to proving that Washington believed in the deity of Christ and the Trinity. In all of his voluminous writing only once does he speak of Jesus and this single incident, a speech to the Delaware Indians, most likely written by an aide more orthodox than he. On the manuscript of another speech to Indian leaders, we can clearly see the word “God” crossed out and the phrase “Great Spirit” written in Washington’s own hand.


It was on Christmas Eve 1968 that the astronauts of Apollo 8, Frank Borman, Jim Lovell, and Bill Anders, became the first of mankind to see an earthrise from the orbit of the moon, and looking back on us, they spoke these words:Anders: "We are now approaching lunar sunrise. And, for all the people back on earth, the crew of Apollo 8 have a message that we would like to send to you..."In the beginning, God created the Heaven and the Earth. And the Earth was without form, and void; and darkness was upon the face of the deep. And the Spirit of God moved upon the face of the waters. And God said, Let there be light; and there was light. And God saw the light, that it was good; and God divided the light from the darkness."Lovell: "And God called the light Day, and the darkness He called Night. And the evening and the morning were the first day. And God said, Let there be a firmament in the midst of the waters, and let it divide the waters from the waters. And God made the firmament, and divided the waters which were under the firmament from the waters which were above the firmament; and it was so. And God called the firmament Heaven. And the evening and the morning were the second day."Borman: "And God said, Let the waters under the Heaven be gathered together unto one place, and let the dry land appear; and it was so. And God called the dry land Earth; and the gathering together of the waters He called Seas: and God saw that it was good."And from the crew of Apollo 8, we close with good night, good luck, a Merry Christmas, and God bless all of you, all of you on the good earth."It is good. God bless us, every one.
Posted by Tom Van Dyke at 4:23 AM No comments:

Jedidiah Morse was one of the forces of orthodox, Calvinistic religious correctness who was sorry to see "heresies" gain traction during the American founding. Among other things, he was an enemy of theological unitarianism and had quite an amusing exchange with John Adams that I've reproduced numerous times.

Here I just discovered his letter to then President James Madison on what Morse saw as an appalling plan to spend government money to buy the library of Thomas Jefferson. The letter to Madison is dated November 23, 1814. I reproduce it in whole below:

Perhaps you may Wonder to See Such a Schroll as this; Coming from an old man, now in the 89th year of his age; who has lived to See the End of two Distressing Wars but does not much Expect to See the much desired End of the present, Cruel, unnecessary, unjust War; Esteemed so by thousands of the good people of the United States and the Expences of it, too heavy, and grievous to be borne; But what I principally aimed at, in writing this to your Excellency, was, that I am Informed, by the papers; that Congress, has it in Contemplation to purchase; Mr. Jeffersons Library, at the Enormous price of 25000. Dollars; which Consists Chiefly, of Deistical Books; and hetrodox Works; Such as Arian, Socinian-Arminian; antinomian; Paines age of reason, and others of his Deistical Works; Ethan Allens Bible;1 and what not of a Deistical Cast;2 if Congress wants a Library, I am willing they Should have one; but Not Mr. Jeffersons. I will take leave to propose a better one; and in a more just and Easy way; which is as follows (viz) that Each member of Congress; procure a book, or books to the amount, or Value of three Dollars, which is but half a days wages; which will hardly be felt; his Excellency, the President, to lay the foundation, of the Library, or Set the first Example,3 by putting the first Book, if he Shall So Choose, and approve of the same—and Each member of Congress; Shall Insert his name, in the book or books, he Shall so procure; and lodge in the Library; Whither they be ancient, or modern history; Geography; gazetteers or theoligy; or whatever book, or books, he Shall Choose to lodge in the library; that Each member of Congress; may know by the Name; the religious Sentiment of the Donor; if any Easier way, to procure a Library Can be devised by our Congress; and Not to add, to the burden, which the people of the United States, now groan under, and Co[m]plain of, and not without Just Cause; I have Nothing to object; and pray I may be Excused for my boldness; in attempting to write to one, who is So much Superior in office; tho. not in age, as myself; and with due Consideration, and Submission Subscribe with my own hand and name your Excellencys humle Servant

That's the title to a Volokh Conspiracy post. There is actually a court case in Arizona on this question. Eugene Volokh aptly sums up the court's opinion: "Not for secular courts to judge, holds the Arizona Court of Appeals."

James Madison said the very same thing in his Notes on the Memorial and Remonstrance. That he didn't want courts of law making these judgments was a strong motive in driving that document.

Below doesn't quote from the Arizona case but Madison's aforementioned Notes:

3. What is Xnty ? Courts of law to Judge.4. What edition: Hebrew, Septuagint, or Vulgate ? What copy what translation ?5. What books canonical, what apocryphal ? the papists holding to be the former what protestants the latter, the Lutherans the latter what the protestants & papists ye former.6. In what light are they to be viewed, as dictated every letter by inspiration, or the essential parts only ? Or the matter in general not the words ?7. What sense the true one for if some doctrines be essential to Xnty those who reject these, whatever name they take are no Xn Society?8. Is it Trinitarianism, Arianism, Socinianism ? Is it salvation by faith or works also, by free grace or by will, &c., &c.9. What clue is to guide [a] Judge thro' this labyrinth when ye question comes before them whether any particular society is a Xn society ?10. Ends in what is orthodoxy, what heresy. Dishonors Christianity.

Relax, The Future is in Good Hands 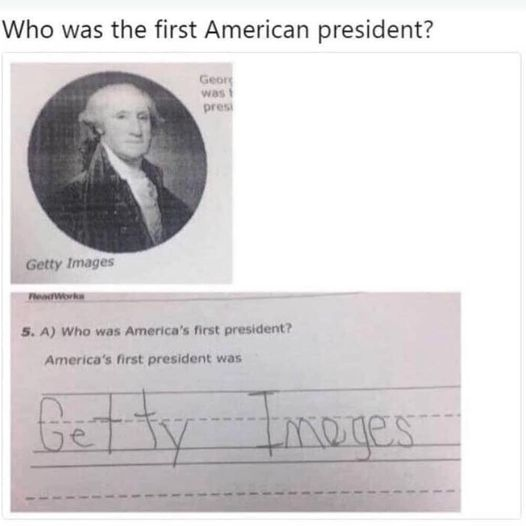