Reading and Listening to the Great Thinkers

Sister Stansberry's long-anticipated first post on this blog states she'd like "to concentrate on aligning the works of the above named English and French contributors to America’s creation in addition to concepts provided for in the Scriptures that their philosophies echo." 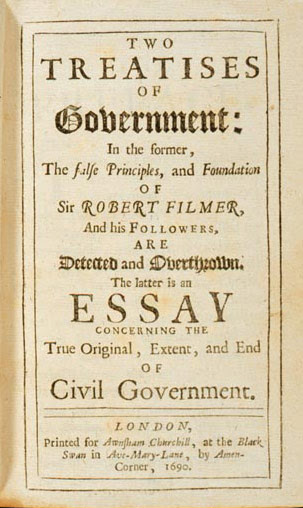 Notice anything funny about this cover? Take a moment. Take two.

OK, the question is, Why is the author's name missing? [All answers must be in the form of a question in Final Jeopardy, silly.]

Because it was published anonymously---John Locke only admitted he was the true author of the "Two Treatises" when he was on his deathbed and the bastards couldn't get at him anymore!

(God, I love using exclamation points when writing about history. It's not as dull as all that, is it? Ripley's Believe It or Not! Thomas Jefferson had three penises!)

John Locke wrote the "Two Treatises" even earlier than he published them, but figured the coast was clear in December 1689 after the Glorious Revolution of 1688, which put William and Mary up under a monarchy that was well-limited by parliament. Locke had already gone into voluntary exile to Holland and France twice in his life as he became a "person of interest" when the England's political climate got too hot---best he still publish the Two Treatises anonymously in case the tide turned against him again.

Ideas, especially bold ones, tend to be subversive to the prevailing order and are a threat to the state. So, out of self-preservation, the state is obliged to kill you. And England in the 1600s was a tough town, especially the Tower of London.

Locke's contemporary, Algernon Sidney, argued along the same lines as Locke, for liberty and against the "divine right of kings." Sidney got his neck stretched by the English crown in 1683 for his outspokenness. Since there was only one witness against Sidney in his A Man for All Seasons-type tribunal but the law required two, the second witness called was Sidney's Discourses upon Government, a book that was much admired by the American Founders, but which proved fatal to its author. Aaaaaaaaaa-ack!

John Locke was not so naïve as poor Algernon Sidney as to the ways of man and his governments. If you want to die in bed, keep a low profile and tell the truth not at the top of your lungs, but sotto voce.

There are scholars who consider Locke quite the Christian, as he quotes the Bible and refers to "Our Saviour" quite copiously. But others see him as Thomas "Nasty, Brutish, and Short" Hobbes in vestryman's clothing,
Locke throwing rhetorical stones at Hobbes from behind the Rev. Richard Hooker's skirts, all the while agreeing with him beneath the surface of his writings.

As our blogbrother Ray Soller illustrates here, even the best and most admired of "experts" and scholars might be wrong about things.

So, the lesson is, think for yourself when you read historians and scholars. There is no "truth" that lies just a google click away. Nothing is "settled" in history, especially the history of ideas, so inquire away. There's no embarrassment in what you don't know, only in what you think and are sure you know. [As one eminent historian just learned from our Mr. Soller.]

When you read John Locke---or any of the Great Thinkers---take nothing for granted. Take nothing at face value. Those were dangerous times they were writing and thinking in, and the Sword of Damocles or the hangman's knot was just a careless statement or two away. In fact, for a philosopher or even a politician, the best thing about dying is that you can finally tell the truth and sign your name to it.

So that was the Sidney mentioned in an earlier post, not the poet of Eliot's lines,

I shall not want Honour in Heaven
For I shall meet Sir Philip Sidney
And have talk with Coriolanus
And other heroes of that kidney.

I seem to recall reading that when John Milton wrote Areopagitica, he was in hiding after publishing a pamphlet in favor of divorce. Wikipedia offers no support for that story, and a perusal of an old textbook that I thought was its source also lacks anything by Philip Sidney. So much for my knowledge of Cavalier poetry or of Milton's circumstances.

Thanks for post. It was a pleasure to start my week reading it!

Good stuff. The difference in approach between Locke and Sidney is essential to keep in mind.