The Geography of Witchcraft
by Brad Hart 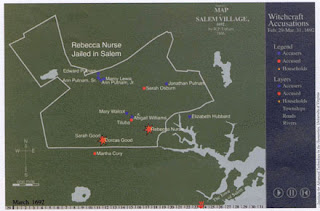 For the second installment -- and 200th posting for American Creation, BTW -- in my series on the Salem Witch Trials, I have decided to look at the geography of seventeenth-century Salem, which has become the centerpiece in William and Mary Quarterly’s July, 2008 review of the Salem historical record. To be more specific, it is Professor Benjamin C. Ray’s article entitled, The Geography of Witchcraft Accusations in 1692 Salem Village that has caught my attention.

In this particular article, Prof. Ray challenges some of the status quo interpretations of the Salem geographical record, and in particular questions the validity of the analysis offered by Paul Boyer and Stephen Nissenbaum in their groundbreaking book, Salem Possessed. [1] As Prof. Ray points out, the most significant source for Boyer and Nissenbaum’s work was the 1867 book by Charles W. Upham, Salem Witchcraft, which included a detailed map of virtually all the households in Salem Village. [2] With this map, Boyer and Nissenbaum endeavored to demonstrate how specific geographic locations within Salem Village -- based primarily on economic and social differences -- led to the factionalism that ultimately divided Salem on the witchcraft issue. For roughly thirty years, Boyer and Nissenbaum’s work has served as the standard interpretation of the Salem Story.

In recent years, however, a number of scholars have come forward to challenge the interpretation offered in Salem Possessed. In 2002, renowned historian Mary Beth Norton published her book, In The Devil’s Snare, which served to challenge some of the assertions made by Boyer and Nissenbaum. As Norton states in the introduction of her book:

The influential "Salem Possessed" (1974), by Paul Boyer and Stephen Nissenbaum, attributes the crisis to long-standing political, economic, and religious discord among men of Salem Village, denying the significance of women’s prominence as both accused and accuser…In the Devil’s Snare contends that the dramatic events of 1692 can be fully understood only by viewing them as intricately related to concurrent political and military affairs in northern New England. [3]

In addition to Norton’s assertions, Prof. Ray points out that the traditional interpretation of the Upham map by Boyer and Nissenbaum is incomplete:

Contrary to Boyer and Nissenbaum’s conclusions in "Salem Possessed," geographic analysis of the accusations in the village shows there was no significant villagewide east-west division between accusers and accused in 1692. Nor was there an east-west divide between households of different economic status…

…Though is may appear that the "Salem Possessed" map carries the burden of the argument about the socioeconomic and geographic foundation of the witchcraft accusations, the map does not supply all the evidence…a total of thirteen accusers were omitted, this indicating that the map is incomplete and does not represent all the accusers. [4] 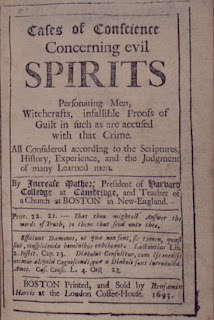 Prof. Ray continues his argument by pointing out the inherently complex nature of geographical data. In his analysis, Ray claims that the map data included in Salem Possessed was conveniently construed to fit Boyer and Nissenbaum’s claims:

Boyer and Nissenbaum placed an all-important east-west demarcation line at the center of their map without explaining its precise location. The lack of explanation is curious because positioning the line slightly to the west would have made a significant difference in the crowded center of the map, shifting several As (a marker used to identify the accused) to the eastern side of the village. [5]

The rest of Prof. Ray’s article goes on to point out various omissions made by Boyer and Nissenbaum in their interpretation of the Upham map. In addition, the article argues that a geographical interpretation that seeks to divide Salem Village socially or economically is inherently too restrictive, and that future inquiry “needs to be set as free of interpretive assumptions as possible if scholars are to have a solid geographic foundation for further historical research.” [6]

Though truly a pioneering work that defined the historiography of the Salem Witch Trials for decades, Paul Boyer and Stephen Nissenbaum’s Salem Possessed should at least be seen as an incomplete take on the Salem saga.

[2] Charles Upham, Salem Witchcraft: With an Account of Salem Village and a History of Opinions on Witchcraft and Kindred Subjects, 2 vols. (Boston, Mass., 1867).

On Sunday August 17, you were blogging about the Salem witch hysteria of 1692 -- and my family was attending worship services at the First Church in Salem, where Rebecca Nurse and Giles Corey once were members.