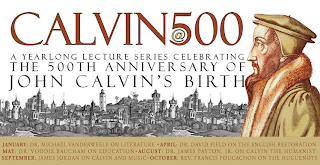 That's right! The man whose ideas inspired generations of early Americans is celebrating his "semi-millenium" and the folks over at "The Calvin Quincentenary" are preparing for a historic birthday bash for one of Christianity's most influential men.

Having assembled an all-star cast of speakers, writers, etc., the "Calvin Quincentenary" is shaping up to be an interesting tour/conference to say the least. As their website states:

The Calvin Quincentenary is an international, interdenominational, and interdisciplinary commemoration of the life and work of John Calvin (b. 1509), which left such an indelible impression on the modern world. Climaxing with conferences in multiple locations in 2009, this celebration combines history, spirituality, and culture to recall appropriately the life and work of the Genevan Reformer.

Esteemed leaders, scholars, and ministers will serve as your guides to learning about this influential man, his vibrant city, and the cultural, religious, political, and economic impact flowing from a movement. This multi-faceted approach seeks to introduce many people to one of the most important thinkers in history.

And while the majority of conferences are being held in various European countries, making it difficult if not impossible for many to attend, the organization states that they plan to post several segments of their various conferences on their website.

So, come this July, prepare for a literal flood of Calvin material on the web. In preparation for this event, I hope we will all make a concerted effort to put a little extra emphasis on Calvin, which will hopefully add some credence to our work here at American Creation.
Posted by Brad Hart at 2:09 PM