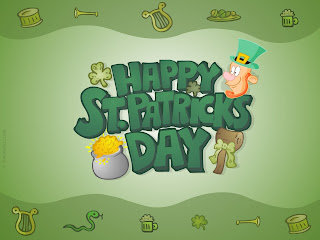 Perhaps you are asking yourself why I would be posting something on St. Patrick's day on a blog like this. After all, weren't most colonial Americans Protestants? Why would they even bother with a celebration like St. Patty's Day? Well, aside from needing another excuse to drink (not that people needed an excuse to get drunk in colonial America), St. Patrick's Day was a powerful cultural symbol of Irish pride.

The first recorded St. Patrick's Day celebration in colonial America was held in 1737. According to the Charitable Irish Society, it was a group of 18th century Irish immigrants to New England who first brought the St. Patrick's Day tradition to the New World:

The origins of Boston’s Irish community stretch back to the early 18th century when considerable numbers of Ulster Presbyterians came to New England in search of economic opportunity and the religious and political freedom which the Penal Laws denied to Dissenters and Roman Catholics alike. Merchants and artisans of Ulster stock founded the Charitable Irish Society in 1737 with the express purpose of assisting fellow Irish immigrants in the traumatic process of settling in a strange new city and country.

Interestingly enough, these Irish immigrants from Ulster were NOT Catholic but Protestant. Their Presbyterian beliefs had also incorporated the St. Patrick's Day holiday as more of an expression of cultural heritage rather than a recognition of Catholic tradition.

Approximately three decades later, New York City became host to the first ever official parade commemorating the celebration of St. Patrick's Day in America. On that day, Irish soldiers, serving in the British military, marched proudly through the streets of New York, while eager crowds gathered to praise their bravery during the Seven Years' War (French & Indian War) and to recognize their Irish heritage. 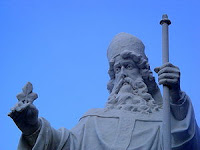 Now, you are probably asking yourself why this post is in blue instead of the traditional St. Patrick's Day green. The answer is actually based in the history of this day. It was during the early part of the 17th century that the celebration of St. Patrick's Day became an officially recognized feast of Ireland. During those first centuries, St. Patrick was regularly recognized with the customary blue, since blue was regularly associated with the ancient colors of Ireland. It wasn't until many years later that the "wearing of the green," meaning to wear a shamrock on one's clothing, made its appearance, thus forever changing the "official" color of St. Patrick's Day. And perhaps we should change the blue to orange, since many Protestants actually chose to wear orange on this day as a symbol of defiance. And while this tradition is still continued by some Protestants to this day, it is interesting to note that many attribute the wearing of orange to William of Orange (William III), who defeated the Catholic King James II to take over the throne of England. Perhaps those who credit William III should remember that the "Orange" in William's nickname has nothing to do with the color, but the French province in southern France. In fact, the orange color in Ireland's flag is actually used to recognize Ireland's Protestant minority.

So should we start pinching those not wearing blue...or orange???
Posted by Brad Hart at 8:42 AM