If you are anything like me, you probably wake up to your own personal subscription list of your favorite blogs on the net. And this morning, in particular, the topic of all the religious blogs centers on the staggering survey results conducted by the American Religious Identification Survey (ARIS). As the USA Today report states:

When it comes to religion, the USA is now land of the freelancers. The percentage of people who call themselves in some way Christian has dropped more than 11% in a generation. The faithful have scattered out of their traditional bases: The Bible Belt is less Baptist. The Rust Belt is less Catholic. And everywhere, more people are exploring spiritual frontiers — or falling off the faith map completely.

These dramatic shifts in just 18 years are detailed in the new American Religious Identification Survey (ARIS), to be released today. It finds that, despite growth and immigration that has added nearly 50 million adults to the U.S. population, almost all religious denominations have lost ground since the first ARIS survey in 1990.

And as the following graph indicates, those who identify themselves as having "no religion" are up in EVERY SINGLE STATE: 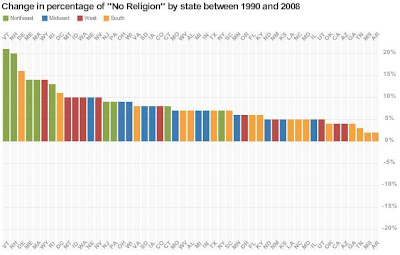 Of course this is nothing new. The current religious landscape of America would be virtually unrecognizable by our founders, who were accustomed to a nation with very few Catholics and a concentration of Episcopalian, Quaker and Congregational denominations.

Well I for one am not surprised. This is a sign of the times. America is losing its Christian heritage and as a result losing itself. It's a sad, sad commentary on our nation. Is it any wonder why same-sex marriage is gaining ground at the same time? I think not. One a nation loses its religious bearings all sorts of evil enters in. I know I will be attacked for this but I must speak up. The bastardization of the Constitution has gone on long enough. Only a repentant heart will return this nation to its rightful place...AS A CHRISTIAN NATION!!!

I am so very disappointed in these findings, and I am sure many will praise them as America becoming "enlightened" or shaking of the "chains" of "biased" religion. To those of that sentiment, my heart goes out to you. For our nation to be happy with the systematic MURDER of unborn babies and to sanction the marriage of GAY people is a slap in the face to every single founding father who would have cringed at such evil notions.

I could go on. It's just such a sad, sad reality that America is losing its way. Is it any wonder that we suffer from horrible crime and drug rates, that divorce is skyrocketing, that gays keep demanding their "equal" rights, that babies are killed (more than the Holocaust), that we are a fat, in debt, lazy, inept, selfish and rude nation?

I think not. God FORGIVE America!

Hello there, Dan! Let me be the first to extend a welcome back to our hard-core religious extremist!

.
"For our nation to be happy with the systematic MURDER of unborn babies and to sanction the marriage of GAY people is a slap in the face to every single founding father who would have cringed at such evil notions."
.

Dan makes orthodox Christians look very creepy. He comes off, in my opinion, as a terrible witness for that faith. Dan could learn from Brian.

Truth and God are universal. No religion, no country has monopoly on it. If every religion frankly state that fact and respect all other religions, all those people who left religions will come back to their respective religions.

For example, even an atheist has the right to condemn Hinduism [ Hindu Culture which is not a religion] in the market and still proclaim he or she is a Hindu and NOT even one Hindu scripture states Hinduism has monopoly on salvation or truth.

.
Goodness, gracious.\
.
The voice of reason and here in the wilderness.
.

Unsurprising. Tocqueville predicted that Roman Catholicism was the only reasonable religion for America to follow.

So I'm not surprised at his animus against a religion he so clearly misapprehends. I would, in his shoes, too.]

.
Tom, I wouldn't respond to your words except that you make an assumption about what I understand and what I don't. I DO know the difference; but, in the final analysis the two amount to the same thing that is currently driving the so-called "pro-life" movement. I also mentioned that I grew up in an era that was heavily influenced by that thinking.
.
BTW, I'm well into my third Strauss book.
.
I am beginning to not only like; but, to admire his thinking.
.

Nice, Phil. I have my own objections to NRH, along Voegelin's lines. [Although they had a correspondence and agreed that Locke was decidedly radical and unChristian!]

I don't know if you mentioned you've read the collection "What is Political Philosophy?" I've only recently got into it, but it provides a groundwork [and a bit of a shortcut] to Strauss' baseline and approach.

I meself am bowled over with Strauss' approach and method of "close reading" and often employ it here on this blog. [See my Ben Franklin piece.]

However, I don't accept his conclusions, and Voegelin didn't either, complaining that Strauss' reductionism and elision of Christianity made his ontology too "compact."

Oh, and Voegelin hated Locke and wrote he shouldn't even be considered a philosopher.

.
Admiration and agreement are two different things.
.
But, it is difficult to disagree with Strauss's conclusions. At least, when he expresses them.
.

YOU disagree with Strauss, Phil, since you believe in "human progress" and he does not. Nor do I think you'd enjoy his constant disparagement of the modernity you so continually espouse.

Unless, of course, he's getting to you...

.
Ever ride a bus, Tom?
.
You get off at the next stop.
.
I agree with Strauss quite often. How can a person not agree with such good sense. I don't ever remember reading an author that goes to such ends to make any point. Strauss helps us change our thinking.
.
And, yeah, I finished that book you're reading a month or so ago.
.

Strauss helps us change our thinking.