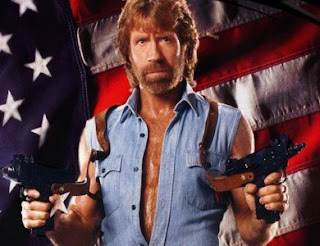 While perusing my personal list of favorite blogs I noticed that fellow contributor and long-time blogging comrade, Brian Tubbs has posted an "interesting" article from WorldNetDaily's very own black belt master, Chuck Norris. Now, normally I would never think to question anything that came out of Mr. Norris' mouth. After all, when the boogeyman goes to sleep at night, he checks under his bead for Chuck Norris. I'm sure you all have heard the thousands of Chuck Norris facts floating along the Internet. Stuff like, "Chuck can kill to stones with one bird," etc., which is enough to paralyze even this ex-cop with fear. With that said, I will do my best at discussing Norris' article, "I May Run For President of Texas."

In the article, Norris attacks the Obama Administration, and Democrats in general, for the recent government bailout, for pledging aid to foreign nations, and for the moral decline of our "Christian" nation. Norris writes:

On Glenn Beck's radio show last week, I quipped in response to our wayward federal government, "I may run for president of Texas."

That need may be a reality sooner than we think. If not me, someone someday may again be running for president of the Lone Star state, if the state of the union continues to turn into the enemy of the state.

From the East Coast to the "Left Coast," America seems to be moving further and further from its founders' vision and government.

George Washington advised, "The great rule of conduct in regard to foreign nations is in extending our commercial relations [and] having with them as little political connection as possible." Yet the Obama administration just pledged $900 million in U.S. taxpayer-funded aid to Hamas-controlled Gaza and Mahmoud Abbas' Palestinian Authority.

Thomas Jefferson counseled us, "We must not let our rulers load us with perpetual debt." Yet the Feds have just skyrocketed our national deficit and debt by trillions of dollars, and it plans much more fiscal expansion with few expectations of resistance. Despite that George Washington admonished, "To contract new debts is not the way to pay for old ones," we keep borrowing and bailing, while we watch the stock market plunge further every time we do.

Patrick Henry taught that, "Our Constitution is … an instrument for its people to restrain the government." Yet our Congress and president stampede that founding document, overlook its explicitness and manipulate its words to abandon a balance of power and accommodate their own desires, partisan politics and runaway spending.

John Adams declared that, "Our Constitution was made only for a moral and religious people." Yet we've bastardized the First Amendment, reinterpreted America's religious history and secularized our society until we ooze skepticism and circumvent religion on every level of public and private life.

Norris then goes on to invoke the legacy of the Alamo, suggesting that succession from the Union, which in his mind will surely preserve America's moral integrity, is somehow the special right of Texas, and may end up being a viable option if things continue to "fall apart."

And while I understand the frustration that many have with the failing economy, etc., I wonder how useful this type of "doomsday" rhetoric really is. Of course it is nothing new when we see activists like Norris invoking religion, patriotism, etc. This trick is as American as apple pie. However, I am impressed with just how fervent and heated the rhetoric has become. Just look at how Norris concludes his article:

For those losing hope, and others wanting to rekindle the patriotic fires of early America, I encourage you to join Fox News' Glenn Beck, me and millions of people across the country in the live telecast, "We Surround Them," on Friday afternoon (March 13 at 5 p.m. ET, 4 p.m. CT and 2 p.m. PST). Thousands of cell groups will be united around the country in solidarity over the concerns for our nation. You can host or attend a viewing party by going to Glenn's website. My wife Gena and I will be hosting one from our Texas ranch, in which we've invited many family members, friends and law enforcement to join us. It's our way of saying "We're united, we're tired of the corruption, and we're not going to take it anymore!"

Again, Sam Houston put it well when he gave the marching orders, "We view ourselves on the eve of battle. We are nerved for the contest, and must conquer or perish. It is vain to look for present aid: None is at hand. We must now act or abandon all hope! Rally to the standard, and be no longer the scoff of mercenary tongues! Be men, be free men, that your children may bless their father's name."

Rally law enforcement? To support the notion that Texas has the right to succeed? Having been a cop in the past (though never a cop in Texas mind you) I am somewhat surprised by such a suggestion. Maybe it's just Norris pretending to be Walker Texas Ranger again. Anyone else worried by the idea of cops rallying to the support of a man who thinks succession might be a viable alternative?
Posted by Brad Hart at 8:49 AM

I think there's a tendency in today's climate to go "over the top" in order to get attention.

I think Norris is playing that game. I don't think he seriously is countenancing secession. I could be wrong. I hope I'm not.

Glad you brought it to this blog's attention, though. As soon as I read the column, I thought it worth calling out for discussion, which is why I put it over on my blog.

And, hey, I guess that's what Norris wants....to get people talking about it. :-)

.
Norris seems, to me, more interested in creating a following than in getting people to talk about anything. Entertainment people live or die based on the size of their audiences. He seems to be aiming at a particular target market.
.
He's making big bucks.
.

Political commentators and activists are increasingly "entertainers." Think about Al Franken on the left and Ann Coulter on the right. They are bomb-throwing entertainers. Perhaps you agree with some of what they say. Many do, but they sell based on how they "fire up" (i.e., entertain) their audiences. (Of course, Franken is just a court case or two now away from the US Senate).

Above deleted due to a typo.
.
I doubt any of us begrudge success for these people.
.
We all work the system. What else is there to do in a capitalist society? Remember what John Donne had to say about that? "No man is an island entirely unto himself..."

I do wonder why Norris would want to succeed from the union, being that this one is already "founded" by Jesus! =)

I’m not sure how quoting Sam Houston advances the insurrectionist/secessionist/Christian revolutionary cause. The Alamo had nothing to do with secession from the Union and everything to do with acquiring territory by force of arms from another sovereign nation. The civil war (or war against northern aggression if you like) was the catalyst for later secession.

I would assume that the outcome of Norris' new American Revolution would be the same.

I've seen people lamenting decreasing Christian identification, a general lack of Christian values and a definite lack of adherence to the Bible in America and blaming the government. If this talk of revolution is about that and you're of the mind that government should be the enforcer of religious dogma and/or morals and/or the Bible then I guess the only conclusion one can come to is that we do need a new government. One with with more specific constitutional language giving authority to enforce the proper religiosity.

Otherwise, it might seem that the pending Norris/Beck revolution is really against the current people in government and the citizens that put them there. I guess though that railing against a nebulous "government" is a better rallying tactic than calling for war against your neighbors.

Actually, the Alamo had to do with seceding from Mexico. Interesting story:

Texas also seceeded from the USA in 1861, but that's another story. But this is all what Norris is referring to. Texas has a history of going its own way when the government doesn't hold up its end of the bargain.

Although I think it's wise to take Norris as speaking hyperbolically here.

I recently came accross your blog and have been reading along. I thought I would leave my first comment. I dont know what to say except that I have enjoyed reading. Nice blog. I will keep visiting this blog very often.

Your Site Is Very Good and The Post is Well On Topic, Thanks for Sharing it with us.