Is "Christian America"
an Imagined Community?
by Brad Hart

Hello again, everyone. Being that this is the first of many posts that will focus on my research into the origins and evolution of the "Christian Nation" movement, I thought I would begin by throwing out a couple of general ideas and seeing what everyone thinks.

In his highly acclaimed book, Imagined Communities, Benedict Anderson presents the argument that a nation:

is an imagined political community -- and imagined as both inherently limited and sovereign. It is imagined because members of even the smallest nation will never know most of their fellow-members, meet them, or even hear of them, yet in the minds of each lies the image of their communion...it is limited because even the largest of them, encompassing perhaps a billion living human beings, has finite, if elastic, boundaries, beyond which lie other nations...Finally it is imagined as a community, because, regardless of the actual inequality and exploitation that may prevail in each, the nation is always conceived as a deep, horizontal comradeship. Ultimately it is the fraternity that makes it possible. (6-7). 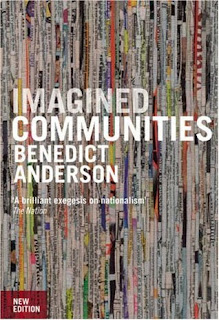 So how do we apply these concepts to the "Christian Nation?" First, apologists of the Christian Nation regularly point out that it is they who share the same values and beliefs as our founding fathers. And even though they have never met an American of the 18th century, the Christian Nation has incorporated them into their imagined community, just as a nation today incorporates its vast citizenry into a collective unity. In addition, "Christian Nationalists," who insist that America was founded exclusively through a devotion to Christian principles, have created an exclusive "boundary," which shuns alternate interpretations of America's founding. And finally, the Christian Nation has successfully woven religion, politics and history into a common web, which has inspired a "brotherhood" of sorts amongst its followers. Their collective goal to "save" America's true Christian heritage has become the glue that unites the religious with the political, all of which inspires its followers to a communal devotion to the basic principles of the Christian nation.

But why get so hung up on America's founding history? After all, the history of the United States spans across two centuries and has seen a number of dramatic religious moments. Perhaps historian Gordon Wood answers this question best in his book, Revolutionary Characters: What Made the Founders Different. Wood writes:

America's Founding Fathers, or the founders, as our antipatriarchal climate now prefers, have a special significance for Americans...No other major nation honors its past historical characters, especially characters who existed two centuries ago, in quite the same manner...The British don;t have to check in periodically with, say, either of the two William Pitts the way we seem to check in with Jefferson or Washington. We Americans seem to have a special need for these authentic historical figures in the here and now. Why should this be so?

Scholars have a variety of answers. Some suggest that our continual concern with constitutional jurisprudence and original intent accounts for our fascination with the founding and the making of the Constitution. Still others think that we use these eighteenth-century figures in order to recover what was wise and valuable in America's past. They believe that the founders have become standards against which we measure our current political leaders. Why don't we have such leaders today? seems to be the implicit question many Americans ask.

Others quite sensibly think that the interest in the revolutionary generation has to do with an American sense of identity. The identities of other nations, say, being French or German, are list on the mists of time and usually taken for granted (the reason why such nations are having greater problems with immigrants than we are). But Americans became a nation in 1776, and thus, in order to know who we are, we need to know who our founders are. The United States was founded on a set of beliefs and not, as were other nations, on a common ethnicity, language or religion. Since we are not a nation in any traditional sense of the term, in order to establish our nationhood, we have to reaffirm and reinforce periodically the values of the men who declared independence from Great Britain and framed the Constitution. As long as the republic endures, in other words, Americans are destined to look back to its founding. (3-4).

As a result, it is only natural that an imagined community within the United States would have to find a way to incorporate the original founders of this nation into their shared communal identity, and such has been the case with the "Christian Nationalists."

Two: "But why get so hung up on America's founding history? After all, the history of the United States spans across two centuries and has seen a number of dramatic religious moments." Simple. Interpretation of the constitution, especially the first amendment.

I just read one of your previous posts, where you hope to trace the origins of the "Christian Nation" movement to the 60s or 70s. Really?

Are you familiar with Jasper Adams? As a reader of this blog I suspect that you are. His sermon is essentially identical to Barton's "Myth of Separation". If I were to toss my two cents of Barton bashing onto the pyre, I would accuse him of plagiarism.

Before then no movement was necessary. Nobody defends that which everyone takes for granted.

Thanks for the comments, Kristo. In all sincerity they really do help me to reassess how I will go about this research project.

Question for ya. You state:

BTW Kristo, in no way am I planning to attack the "Christian Nation" argument. My goal is simply to explore its origins and evolution. But I really do appreciate what those of your persuasion have to say. I think it will be invaluable for my research.

From what I know of Jasper Adams, he seems to share a lot of the same beliefs as other religious figures of his day. After all, he did live during the time of the "Second Great Awakening," which did redefine a lot of ideas on American Providentialism. Nicholas Guyatt's book, Providence and the Invention of the United States actually addresses this quite a bit.

I agree with you to a point. The argument can go back a lot further. However, it is my belief that during the 60s and 70s America saw the merging of conservative Christianity with politics (the Moral majority for example). I hope to demonstrate how this movement spawned the "Christian Nation" movement, and how it can be seen as an imagined community.

It might be a stretch, so this is subject to change. Please feel free to "thrash" me.