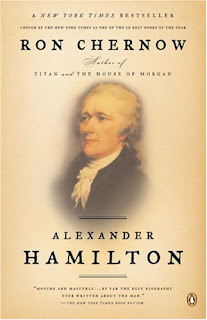 Here at American Creation, we have been debating the role that religion played in the life of Alexander Hamilton. The general theme of this discussion has centered on the question of Hamilton's devotion to Christianity at different points in his life. To be certain, Hamilton was a religious man during the early years of his life. However, it appears that Hamilton's devotion wavered during the middle part of his life, and then possibly peaked again at the end.

So what do we make of Hamilton's devotion/lack of devotion to religion?

Ron Chernow, who has written one of the best biographies of Hamilton, states the following on the role that religion played in the life of Alexander Hamilton:

It is striking how religion preoccupied Hamilton during his final years. When head of the new Army, he had asked Congress to hire a chaplain for each brigade so that his soldiers could worship. Although he had been devout as a young man, praying fiercly at King's College, his religious faith had ebbed during the Revolution. Like other founders and thinkers of the Enlightenment, he was disturbed by religious fanaticism and tended to associate organized religion with superstition. While a member of Washington's military family, he wrote that "there never was any mischief but had a priest or a woman at the bottom." As treasury secretary, he had said, "The world has been scourged with many fanatical sects in religion who, inflamed by a sincere but mistaken zeal, have perpetuated under the idea of serving God the most atrocious crimes."

The atheism of the French Revolution and Jefferson's ostensible embrace of it (Jefferson was a deist who doubted the divinity of Christ, but not an atheist) helped to restore Hamilton's interest in religion. He said indignantly in his 1796 "Phocion" essays, "Mr. Jefferson has been heard to say since his return from France that the men of letters and philosophers he had met with in the country were generally atheists." He thought James Monroe had also been infected by godless philosophers in Paris and pictured the two Virginians dining together to "fraternize and philosophize against the Christian religion and the absurdity of religious worship." For Hamilton, religion formed the basis of all law and morality, and he thought the world would be a hellish place without it.

But did Hamilton believe sincerely in religion, or was it just politically convenient? Like Washington, he never talked about Christ and took refuge in vague references to "providence" or "heaven." He did not seem to attend services with Eliza, who increasingly spoke the language of evangelical Christianity, and did not belong formally to a denomination, even though Eliza rented a pew at Trinity Church. He showed no interest in liturgy, sectarian doctrine, or public prayer. The old discomfort with organized religion had not entirely vanished. On the other hand, Eliza was a woman of such deep piety that she would never have married someone who did not share her faith to some degree. Hamilton believed in a happy afterlife for the virtuous that would offer "far more substantial bliss than can ever be found in this checkered, this ever varying, scene!" He once consoled a friend in terms that left no doubt of his overarching faith in a moral order: "Arraign not the dispensations of Providence. They must be founded in wisdom and goodness. And when they do not suit us, it must be because there is some fault in ourselves which deserves chastisement or because there is a kind intent to correct in us some vice or failing of which perhaps we may not be conscious." How did Hamilton interpret God's lessen after the death of Phillip?

The papers of John Church Hamilton provide fresh evidence of his father's genuine religiosity in later years. He said that Hamilton experienced a resurgence of his youthful fervor, prayed daily, and scribbled many notes in the margin of the family Bible. A lawyer in training, Hamilton wanted logical proofs of religion, not revelation, and amply annotated his copy of A View of the Evidences of Christianity, by William Paley. "I have examined carefully the evidence of the Christian religion," he told one friend, "and if I was sitting as a juror upon its authenticity, I should rather abruptly give my verdict in its favor." To Eliza, he said of Christianity, "I have studied it and I can prove its truth as clearly as any proposition ever submitted to the mind of man." John Church Hamilton believed that the time his father spent at the Grange, strolling about the grounds, broadened his religious awareness. During his final months, he was walking with Eliza in the woods and speaking of children when he suddenly turned to her and said in an enraptured voice, "I may yet have twenty years, please God, and and I will one day build for them a chapel in this grove."(Alexander Hamilton, 659-660)

For the most part, Chernow seems to be in agreement with the general points of our discussion of Hamilton: He was religious as a youth, became less religious during his middle years -- though never anti-religious -- and renewed his commitment to God/religion at the end of his life. During his middle years, when religion seemed to be of less importance in his life, Chernow argues that Hamilton used religion more as a political tool than anything else. In this way, Hamilton can be likened to some politicians/pastors today, who use religion as a political tool of sorts.

Maybe things don't change as much as we think!
Posted by Brad Hart at 12:01 PM

Again, this proves only that Hamiliton grew suspicious of organized religion, specifically clerics.

Scholars may assert that Hamilton used religion for political ends; perhaps this is so, but it remains opinion, not fact.

My reading of Hamilton on the French Revolution is that he was genuinely, um, revolted by its atheism.

Yes, I agree in part Tom.

I think it is clear that Hamilton lost his DEVOTION to Christianity for a period of time, but never completely DENIED the faith. Now, as to the specifics of his orthodoxy, I remain uncertain. After all, Hamilton -- like Washington -- was not a big fan of liturgy, public prayer, etc. With that said, I do think Chernow is right to point out that Eliza would be very skeptical of anyone who did not maintain AT LEAST a basic belief in her faith.

As for Hamilton using religion for political ends, I think that there is a case to be made. His Christian Constitution Society was certainly a product of his desire to destroy the Jeffersonians. The society's main goal was to label Jefferson and his minions as godless heathens who were bent on bringing the terrors of the French Revolution to the shores of America.

And yes, I also agree with you on Hamilton's abhorrence of the French Revolution. It scared the hell out of him.

though never anti-religious -- and renewed his commitment to God/religion at the end of his life.>

Like my earlier quote of Hamilton proves, he was affirming Christianity before his son died.

More than man's opinions is needed to refute the label of Christian to Alexander Hamilton.

The society's main goal was to label Jefferson and his minions as godless heathens who were bent on bringing the terrors of the French Revolution to the shores of America.>

No! Here is the society's main goals:

Let an association be formed to be denominated ``The Christian Constitutional Society.'' Its objects to be:

1st. The support of the Christian religion.

2d. The support of the Constitution of the United States.

I agree with you that Hamilton returned to his religious roots. I believe there is quite a bit of proof for this conclusion, as Chernow himself sites.

As for the goals of the CCS, I think you need to be careful here. You are in danger of painting yourself into a corner. Yes, the CCS did have certain goals as part of its organization, but this does not mean that it NEVER EVER participated in the political arena. It most certainly did.

Focus on the Family also has stated Christian goals, but is often involved in politics. How is it then that you can refuse to accept the possibility that Hamilton used the CCS as a political tool?

Brad you hit on something interesting and perhaps probative here:

The society's main goal was to label Jefferson and his minions as godless heathens who were bent on bringing the terrors of the French Revolution to the shores of America.


But here's the thing---the tone of the discussion toward Hamilton's renewed religiosity.

Even if all true, the horrors of the French Revolution and its smug atheism [nihilism!], the election of the "godless" Jefferson and the despicable Aaron Burr as VP might have convinced Hamilton that a deeper emphasis on Christianity was needed to avoid America sharing France's fate.

This book argues on page 111 that there was indeed a religious revival in America around 1800 as a reaction to the goings-on in France.

What's missing in this discussion lately is the possibility that Hamilton was sincere, and not simply using these sentiments as a "tool" for power. It was by no means certain that America wouldn't go the way France did.


And yes, I also agree with you on Hamilton's abhorrence of the French Revolution. It scared the hell out of him.

Indeed, Brad. As it should scare any sane man.

Agreed. I think that Hamilton's employment of religion in the war against Jefferson could have been sincere. After all, Jefferson's whole hearted support of the French stood against Hamilton's understanding of American independence itself -- which for Hamilton was based on religion.

How is it then that you can refuse to accept the possibility that Hamilton used the CCS as a political tool?>

Because he died before it was implemented, so you can't use that against him.