[F]or I have sworn upon the altar of god, eternal hostility against every form of tyranny over the mind of man. But this is all they have to fear from me: & enough too in their opinion, & this is the cause of their printing lying pamphlets against me, forging conversations for me with Mazzei, Bishop Madison, &c., which are absolute falsehoods without a circumstance of truth to rest on; falsehoods, too, of which I acquit Mazzei & Bishop Madison, for they are men of truth.

The context of Jefferson's letter to B. Rush was he slammed the orthodox Trinitarian clergy who termed him an "infidel." Jefferson felt comfortable discussing his heterodoxy with Bishop Madison. While I don't know of all of Jefferson's "conversations" with Madison, this letter where Jefferson talks highly of Adam "Wishaupt," founder of the Bavarian Illuminati, seems quite telling. Jefferson certainly wouldn't feel comfortable uttering sentiments like this to Timothy Dwight, Jedidiah Morse or the other orthodox clergy who typified the "religious correctness" of the Founding era. The following passage in Jefferson's letter to Bishop Madison is telling of the "Christianity" or "republican religion" that Jefferson, Bishop Madison, Richard Price and Joseph Priestley all shared:

Wishaupt seems to be an enthusiastic Philanthropist. He is among those (as you know the excellent Price and Priestley also are) who believe in the indefinite perfectibility of man.

Now, Jefferson, Price, and Priestley were all theological unitarians. Was Bishop Madison? I don't know. I have found no evidence (so far) where he denied the Trinity. And David L. Holmes (top historian at William & Mary, and currently faculty advisor to the Bishop James Madison Society at William & Mary) terms him as probably an orthodox Trinitarian Christian in his stellar book "The Faiths of the Founding Fathers." He was a Bishop in the Episcopal Church, whose official doctrines were orthodox, after all.

After reading up on Bishop Madison, I have my doubts. If he were an orthodox Christian, he was nonetheless one imbibed in radical enlightenment philosophy and turned, not to orthodox Christian principles to justify "republicanism" but rather theistic rationalist principles. Because of Madison's involvement with enlightenment radicalism, the orthodox at the time accused him of being an "infidel." Here is Bishop Meade, an Episcopal historian of the Founding era, on the matter:

It has been asserted that Bishop Madison became an unbeliever in the latter part of his life, and I have often been asked if it was not so. I am confident that the imputation is unjust. His political principles… may have subjected him to such suspicion. His secular studies, and occupations as President of the College and Professor of Natural Philosophy, may have led him to philosophize too much on the subject of religion, and of this I thought I saw some evidence in the course of my examination; but that he, either secretly, or to his most intimate friends, renounced the Christian faith, I do not believe, but am confident of the contrary.2

What kind of "Christian faith" Bishop Madison professed -- that of the orthodox or the unitarianism of Jefferson, Priestley, and Price -- remains unknown. Though, I think what I uncover here should cast serious doubt on his orthodoxy and clearly show him as the Enlightenment radical that he was. To which we might react: This guy was a BISHOP in the Episcopalian Church?!? This demonstrates how firmly entrenched Enlightenment principles, even those of the radical French philosophes, were in elite American Founding era circles.

Key evidence that Bishop James Madison adhered to radical Enlightenment philosophy is found in the article entitled "Bishop James Madison and the Republic of Virtue," by Charles Crowe, published in The Journal of Southern History, in 1964. (Hopefully, you'll be able to access the entire article as I can at my college of employment).

Like many of the pro-revolt "Whig-republican" preachers of the Founding era (both unitarian and trinitarian) Bishop Madison "revised" the biblical record and "read in" a republicanism that is not there. Where the Bible speaks of a KINGDOM of Heaven, Bishop Madison, we are told, spoke of a REPUBLIC of Heaven.

Madison's radicalism is evident in his 1795 Sermon MANIFESTATIONS OF THE BENEFICENCE OF DIVINE PROVIDENCE TOWARDS AMERICA, where he noted:

How was the human race to be restored to their inherent rights, rights, which the God of nature consecrated at the birth of every individual?...How were those sentiments of equality, benevolence and fraternity, which reason, and religion, and nature enjoin, to reassume their sovereignty over the human soul,...? How could the principles of a revolution so important, so essential for the happiness of the human species, be generated, but by raising up, as it were, a new race of men, in some remote, some blessed clime, where, from their infancy, unfettered by those errors, which time appears to sanctify, they should be trained not only to a knowledge, but to a just sense of the duty of asserting and maintaining their rights; and above all, where the love of equality, the basis of all rights and all social happiness, should be congenial to man? This favoured region, favoured indeed of heaven, is America. It is here, a knowledge of those political truths, which the immortal Sydneys and the Lockes of former years investigated with philosophic eye, bursts spontaneous forth. It is here, that men, led by the hand of nature, their minds unawed and unobscured by opinions and customs as barbarous and unfriendly to social rights as the dark chaotic ages, which gave them birth, see and acknowledge as axioms, what philosophers have toiled to establish by deductions, long and intricate. It is in America, that the germs of the universal redemption of the human race from domination and oppression have already begun to be developed; it is in America, that we see a redintegration of divine love for man, and that the voice of heaven itself seems to call to her sons, go ye forth and disciple all nations, and spread among them the gospel of equality and fraternity.

This is important to note: Madison's sermon was dressed up in explicitly Christian language, and indeed arguably has rights to the "Christian" label (I don't want to cast doubt on Madison's religious sincerity). The instructive lesson is that sometimes Enlightenment radicalism presents itself as "Christian." Think of Bishop Madison as one of the earliest "liberation theologists."

On page 61 of Crowe's JSTOR article, we are told that, in 1797, Bishop Madison supported the French Revolution and thought of the American executive power as an "organ of the general will." I've uploaded page 63 of Crowe's article which quotes Madison speaking in more detail about his endorsement of the "general will," (for those unaware, "general will" is a term/concept posited by Rousseau and is central to his political philosophy): 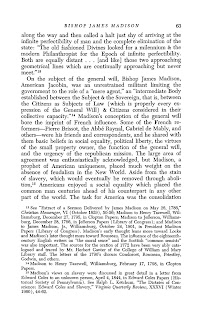 Bishop Madison's sentiments also illustrate that the American Revolution was key in inspiring the French Revolution and consequently, Jacobinism, or the idea of spreading "liberal democracy" or "republican revolutions" to the entire world. The model of the American Revolution, Madison noted, "will redeem the captive nations of the earth." Madison believed that the liberal democratic or republic revolution that America perfected

will not be arrested in its progress, until the complete restoration of the human race to their inherent rights be accomplished, throughout the globe. Let the tyrants of the earth set themselves in array against this principle; “they shall be chased as the chaff of the mountain before the wind, and like the down of the thistle before the whirlwind.”

Bishop Madison sounds not unlike the neo-conservative Straussian Francis Fukuyama (before he was spooked by the second Iraq War) when he noted to CSPAN's Brian Lamb:

Now, by the French Revolution, we don’t mean just the limited historical event; what we mean is the emergence of what we understand as modern liberal democracy because in the French Revolution, ultimately what it was about was a revolution in favor of the principles of liberty and equality. Now you could substitute the American Revolution for that because, I think in that kind of ideological sense, those two revolutions were equivalent. I mean, they were both revolutions to create what I earlier defined as a liberal democracy as a political system based on popular sovereignty with guarantees of individual rights.

[The thesis of Fukuyama's book, "The End of History and the Last Man," was that Bishop Madison's/the French Revolution's idea of global liberal democracy would soon bear fruition. Though as post-modern philosophers, the East Coast Straussians (of which Fukuyama is one), don't believe in any kind of viable, God-given, "natural rights" justification for liberal democracy (i.e., what was argued during the Founding era by Bishop Madison and America's Founders), but rather thought that a Hegelian sense of "History" would vindicate the concept.]
Posted by Jonathan Rowe at 1:22 AM

Francis Fukuyama attached himself not to Leo Strauss, but to Alexandre Kojève, who was the philosophical founder of the European Union. Although Strauss indicates that Kojève's dream of a nauseatingly gray democratization/universalization of philosophy might well someday subsume us all, he is disgusted by the very thought, as argued in Strauss' On Tyranny.

After the fall of the Soviet empire, Fukuyama confidently predicted the "End of History," where Kojève's vision of a secular liberal humanistic democracy would surely sweep the world.

Didn't quite go down that way. In fact, Fukuyama is thought a fool these days, his reputation in tatters.

As for Bishop Madison, the extent of his influence beyond Thomas Jefferson would have to be illustrated. And has been noted around here, bishops were largely absent from America at the Founding, following only after.

That was a good if not essential thing, I think.

Looking at Bishop Madison's prattlings, and that of today's National Council of Churches, and I'm very good with the anti-clericalism that was a hallmark of the American Founding.

Kojève was, if I get the story right, one of Strauss closest interlocutors. Fukuyama does note the downside in his book of "The End of History," and Strauss-critics (like Ms. Drury) use what you wrote from "On Tyranny" to argue he/they really weren't believers in "liberal democracy," but rather war. That is they use "liberal democracy" as an excuse to go to war.

The idea is man is most alive when fighting a war, most dead when living a middle class, bourgeois, life.

I don't want to fall into characature like Drury does, but I do get a sense of that when I read Strauss, Bloom, Kristol, Fukuyama and co. From my end, I the Straussians make much better book authors and college profs. of "provocative" ideas than real world workers in politics who actually put those ideas into reality.

Well, you have the story right except for the war part, which is a slander ginned up by the anti-neo-con crowd. The victory of the Universal Homogeneous State means the end of philosophy and of excellence. [When everyone's special, no one is.]

It's true that Strauss suspected that the Kojève crowd might indeed someday win. It's also true that if bourgeois liberal democracy were to be the agent of this enforced mediocrity, then Strauss would have to take the shocking position that perhaps it's not the best system after all.

I agree that the perpetual war thing is a conclusion too far reached. However, based on what they -- the Straussians including Strauss himself -- have written, I understand why that conclusion would be drawn.

In fact, the tyranny of the many can be more stultifying as we saw on several occasions in the 20th century.

.
Does anyone know when the actual Doctrine of the Trinity came into being?
.
My question is specific to the actual doctrine and not some generality.
.
Thanks.

Phil, I'm no expert, but Wikipedia discussed the origins of the Trinity Doctrine.

Google reveals quite a few individuals who offer explanations.

From my end, I can't say when it came into being. Though I know the matter was "settled" as "orthodoxy" by the Council of Nicea in 325AD.