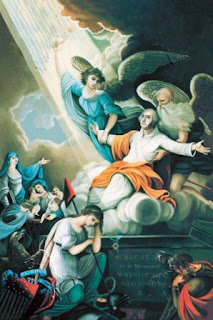 I've never been a fan of conspiracy theories, mythical tales, or romantic fables.They are next to impossible to prove and are often saturated with over dramatic images, rendering the story to be totally unbelievable. Despite the fact that such stories and legends are often historically inaccurate, they do serve to illustrate the beliefs, hopes and faith of their contemporaries.

Just the other day I came across such a story. While doing a Google search on something completely unrelated, I stumbled upon this website, which gives an alleged account of a heavenly vision that George Washington experienced at Valley Forge (it seems like Valley Forge is always being inundated with fable these days!).

The webside gives an alleged account by an Anthony Sherman, who was supposedly a soldier at Valley Forge during the events. His alleged account (which I recommend you read in its entirety if for nothing more than entertainment) relates the following story:

You doubtless heard the story of Washington's going to the thicket to pray in secret for aid and comfort from God, the interposition of whose Divine Providence brought us safely through the darkest days of tribulation. One day, I remember it well, when the chilly winds whistled through the leafless trees, though the sky was cloudless and the sun shown brightly, he remained in his quarters nearly all the afternoon alone. When he came out, I noticed that his face was a shade paler than usual. There seemed to be something on his mind of more than ordinary importance. Returning just after dusk, he dispatched an orderly to the quarters who was presently in attendance. After a preliminary conversation of about an hour, Washington, gazing upon his companion with that strange look of dignity which he alone commanded, related the event that occurred that day.

This afternoon, as I was sitting at this table engaged in preparing a dispatch, something seemed to disturb me. Looking up, I beheld standing opposite me a singularly beautiful female. So astonished was I, for I had given strict orders not to be disturbed, that it was some moments before I found language to inquire the cause of her presence. A second, a third and even a fourth time did I repeat my question, but received no answer from my mysterious visitor except a slight raising of her eyes.

By this time I felt strange sensations spreading through me. I would have risen but the riveted gaze of the being before me rendered volition impossible. I assayed once more to address her, but my tongue had become useless, as though it had become paralyzed.

The account goes on to state that Washington's "heavenly" eyes were then opened and he beheld the incredible future that awaited the nation he was helping to create.

Though the story has absolutely no credibility whatsoever (for example, the soldier Anthony Sherman actually served under Gates and not Washington), I still think it is worth mentioning simply because it illustrates how powerful the LEGEND of George Washington has become (for both colonial people and modern society). Whether it is the cherry tree, silver dollar, praying at Valley Forge or seeing heavenly angels, the bottom line is that the LEGEND of Washington has become virtually impenetrable, especially when it comes to the religious right revisionists.
Posted by Lindsey Shuman at 9:25 AM