Founding Religion in Modern Politics: Why Conservatives and Liberals Get it so Very Wrong

Will all of the political talk surrounding Obama's religion, along with the role of faith in the halls of government that seems to be infesting the "blogosphere," I thought it might be fun to look at how the religion of our Founding Fathers has become a political platform of sorts. No matter where you turn these days, it is virtually impossible to avoid the onslaught of Democrat and Republican politics. Both parties are fully invested in this year's election in an effort to ensure that their guy grabs the White House in 09. Political rhetoric seems to saturate the airwaves with promises of reform and change coming from the rival political camps.

Of all the arguments that seem to complicate this year's election, religion is at or near the top. Whether it comes in the form of Mitt Romney's Mormonism, Mike Huckabee's Evangelical beliefs, or allegations of Barack Obama's ties to Islam and the Reverend Jeremiah Wright, the religion of our candidates has taken center stage. To further complicate this messy conglomeration of religious fervor, both the Democrats and Republicans have chosen to passionately invoke the memory of our Founding Fathers to bolster support for their respective causes. From Mike Huckabee's assertion that the majority of the signers of the Declaration of Independence were clergymen, to Barack Obama's "More Perfect Union" speech, this season's crop of presidential hopefuls have fully embraced the time-honored tradition of "piggybacking" the memory of the Founding Fathers with their individual political agendas.

This is, of course, nothing new to the world of politics. Over the centuries virtually every politician has appealed to the legacy of the Founding Fathers to rally support. What has changed, however, is the fanatical desire to polarize the religious sentiments of the Founding Fathers. These extremist views between the secularism of most liberals and the Christian zeal of most conservatives, has created opposing doctrines on how religion influenced America's founding. As Steven Waldman points out in his new book Founding Faith:

In battles over prayer in school, courtroom displays of the Ten Commandments, and other emotional issues, both sides follow a well-worn script: The "religious" side wants less separation of church and state, and the "secularists" want more...For starters, many conservatives believe that if they can show that the Founding Fathers were very religious, they thereby also prove that the Founders abhorred separation of church and state...Some liberals, meanwhile, feel the need to prove the Founders were irreligious or secular and therefore, of course, in favor of separation...But in the heat of this custody battle over the spiritual lives of the Founding Fathers, BOTH SIDES DISTORT HISTORY...In fact, the culture wars have so warped our sense of history that we typically have a very limited understanding of how we came to have religious liberty.

Waldman's bold statements are virtually echoed by those of author John Meacham, who writes in his book American Gospel the following:

Both sides feel they are fighting for the survival of what's best for America: liberals for openness and expanding rights, conservatives for a God-fearing, morally coherent culture...The conservative right's contention that we are a "Christian nation" that has fallen from pure origins and can achieve redemption by some kind of return to Christian values is based on wishful thinking, not convincing historical argument...the secularist arrogance that religion played no role in America's founding is equally ridiculous.

So where does this leave us? Despite all of the "historical" arguments of the Democrats and Republicans, we can conclude three truths about the role of religion in the lives of the Founding Fathers, and its influence on America's founding:

1.) The Founding Fathers were religious individuals, in the sense that they believed in a "divine Providence," which oversaw and assisted in the efforts of mankind. Very few can or should be classified as Atheist. In one form or another, the majority believed in a higher power.

2.) The "Major" Founders (Jefferson, Washington, Franklin, Madison, Adams, Hamilton) had a strong distrust of organized religion. The Founders were more than aware of the religious atrocities that had occurred in the colonies (the Salem Witch Trials and English Civil War were still fresh in the minds of almost everyone). The ideology and doctrine of the Enlightenment, though not opposed to religion, did convince many within colonial society that an individual did not need organized religion to commune with deity. Thus the birth of Unitarianism became the premiere mode of worship and belief for these founders.

3.) The United States of America was NOT created as a CHRISTIAN nation. Though this is often an offensive statement to many Christians, I would remind them that virtually every major founder supported religious pluralism in the early years of the republic. Though the Founders embraced Christian ideals, this does not suggest that they created a Christian nation. As John Adams himself stated, "The government of the United States is not in any sense founded on the Christian Religion."

Though this argument is likely to continue for many years to come, perhaps some sense of it could be made by merely taking a trip to Washington D.C. There you will find the Washington Monument (built in the style of the Egyptian Obelisk). Egypt, as we all know was hardly a Christian nation. Then there is the United States Supreme Court building, which is build after the manner of the Greek Parthenon (Greece, as we all know, was a deeply pagan society at the time of the Parthenon). The Supreme Court building is also adorned with an elegant statue of Moses (which, of course, has angered many secularists). Perhaps the secularists should give the statue a further examination, for they will find that Moses is accompanied by a statue of Confucius (the great Chinese philosopher) and Solon (the great Athenian poet, statesman and leader in early Greece). Inside the Supreme Court building you are also likely to see the pagan statues of Britannia and Mars. Again, the Founding Fathers sought to create a nation where we would embrace and accept ALL beliefs, which is a perfect example of their Unitarian leanings. 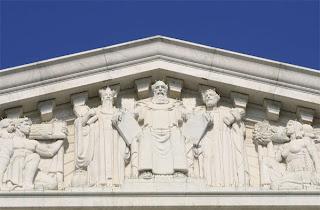 This "Temple of Justice" as it was called, has become a symbol of America's religious diversity, which is one of its greatest strengths. It would do both the conservatives and liberals a great deal of good to remember these truths before making their partisan claims. After all, only damage can come from distorting history to fit one's agenda. As John Meacham states, "If totalitarianism was the great problem of the twentieth century, then extremism is, so far, the great problem of the twenty-first."
Posted by Brad Hart at 3:27 PM

Very nice. I think Meacham spells his first name "Jon" just like me.

I'll give you Jefferson and Franklin, but I think you're wrong to put GW in that same category.

Corresponding with preachers does not mean that he trusted them. Also I think that his creation of the chaplaincy corps could be seen as an example of his desire for religious pluralism...more evidence that he was a Unitarian.

And his telling the Indians to study the "religion of Jesus Christ"?

You bring up an interesting paradox of sorts, Brian, because Washington also talks about the "Great Spirit" when he writes to the Indians. It's like Washington is sort of contradicting himself.

I think that the bottom line is this: When it comes to Washington, those in favor of him as a Deist and as an orthodox Christian have the burden of proving their claims. To be honest, I don't see how either side can honestly support their views based on the evidence. Washington mentioning Christianity to the Indians, or his admonition to his troops that they behave as good Christians is virtually the only evidence - in roughly 20,000 pages of Washington Papers mind you - of his affinity for Christianity, and even then, there is no mention of orthodoxy.

Unitarianism is where I think Washington fits best, but then again, I am notorious for being a centrist.

Another thing to keep in mind about the GW & Indians "religion of Jesus Christ" quotation (the only one time his public speeches ever record GW speaking those words in a speech not written in his own hand!) is that the Indians made it clear that they wanted to learn Christianity and he was approving of their wish to learn. Hence his "you do well to wish to learn..." part of the sentence.

Let me be clear. I don't see GW as an evangelistic type Christian. He was very close to the vest with his faith, preferring to speak in very generic and soft terms. That said, he DID - on occasion - refer to Jesus. So, as slight as the evidence might be, the evidence IS there. Thus, even if you want to apply the adjective "lukewarm" to him, I think you have to put him in the Christian camp.