Stephen Carter on the Presidential Oath

The President of the United States of America is certainly free to add "So help me God" to his oath of office, but as has been explained by Stephen Carter on the Paula Gordon Show broadcast on October 31, 2000, The Price of Power:

What about "one nation, under God" in the Pledge of Allegiance? Say it if you believe it, refrain if not, you pick, advises Mr. Carter. But it's very different and a serious problem when the Chief Justice of the United States adds '...so help me God' to the Presidential oath. That's not optional and turns the oath into a religious test, prohibited by the Constitution. George Washington said it [raySoller - of course, we don't know that], but the phrase should not be there. 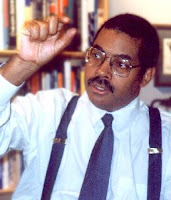 Stephen Carter Professor of Law, Yale University, and an author. A former clerk to Supreme Court Justice Thurgood Marshall, Mr. Carter is among the nation's leading experts on constitutional law. Mr. Carter confronts what he views as challenges to America's democracy in his several books, including The Culture of Disbelief, Civility, Integrity and God's Name in Vain.

The Price of Power: ``What about "one nation, under God" in the Pledge of Allegiance? Say it if you believe it, refrain if not, you pick, advises Mr. Carter.′′

Note that the context of the question is whether or not a politician is proper in saying those words, upon his own personal initiative.

In that context, I agree with Mr Carter.

It is unfortunate he did not comment upon the issue of the government leading children in the pledge.

The prior paragraph is

The Price of Power: ``And it's fine when a politician ends his speech with "God bless you and God bless America," if this is a profession of that politician's faith. But if the proclamation is driven by a focus group, not faith, Mr. Carter thinks it is...terrible. It is not only cynical, it also violates the ancient prohibition against taking God's name in vain. It says, in effect, "We don't care what you believe, we just care what you say."′′

It's hard to tell which side of the debate Carter falls, but that last sentence is a good one :-)

In any event, speaking for myself; I find it immoral that the included words carry with them the intended implication that those who do not believe in God do not hold an allegiance to liberty and justice for all, and that our government is instructing our children as such :-(

.
In law, a precedent is a law established by following earlier judicial decisions.
.
Is it fair to say that any chief justice that makes the decision to add, "So help me, God", to the oath of office is an activist judge?
.

pinky: "Is it fair to say that any chief justice that makes the decision to add, "So help me, God", to the oath of office is an activist judge?"

In my opinion, if the Chief Justice adds any content to the oath of office, he has transgressed the powers enumerated upon him by the constitution.

I don't think of that as what most refer to as an "activist Judge". From what I infer, and activist judge is one who interprets the law in a manner that is in conflict with those who refer to him as an "activist judge". It is really no more than an ad hominem attack by those who are unable to offer compelling argument ... that's my opinion anyway ;-)