The American Founding, by Focus on the Family

Taking a vacation to the snow-capped Rocky Mountains of Colorado is an appealing attraction for thousands of Americans every year. As most can imagine, Colorado is consistently in the top five states for tourism every year, thanks to its impressive displays of nature.

Having lived most of my life in Colorado -- and while currently residing in Colorado Springs -- I have had the privilege of exploring what this region of the country has to offer. When most people think about Colorado Springs, usually the first images that pop into their mind are those of Pikes Peak, Garden of the Gods, Cave of the Winds, the U.S. Olympic Training Center the United States Air Force Academy, and of course...FOCUS ON THE FAMILY.

With that said, I thought some of you might enjoy a brief "virtual tour" of the Focus of the Family Welcome Center, where they provide a brief preview of their take on early American history and the role of religion in shaping that history. First off, I must apologize for the mediocre quality of the video that I took during my visit. My camera is not the best and unfortunately the batteries don't last long. With this in mind, I give you The history of America's founding, by Focus on the Family:

The advertisement for "The Truth Project," which includes Focus on the Family's take on the religious origins -- specifically Christian origins -- of America's founding 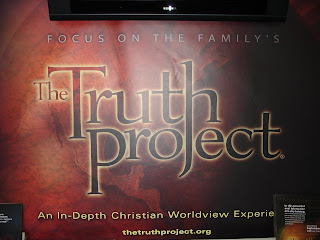 The "Drive Thru History America: Foundations of Character" Campaign 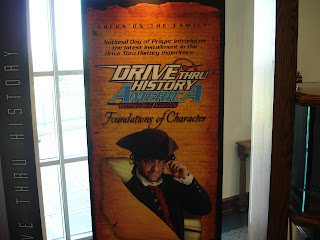 Next to the advertisement for "The Truth Project" there is a display for the National Day of Prayer, which they also specify with a national day of thanksgiving to God for the religious faithfulness of the founding fathers 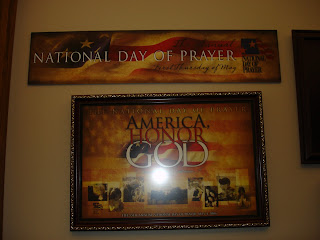 And now, as promised, the video:

Here are some additional pictures:

The entrance to Focus on the Family 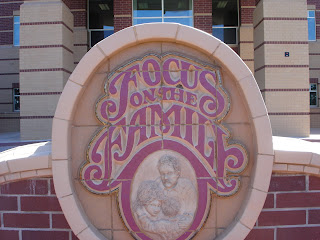 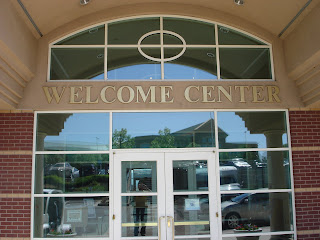 Entrance to the Welcome Center 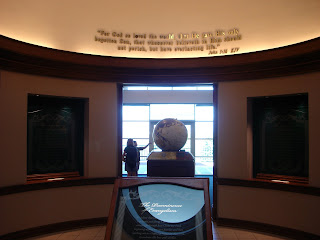 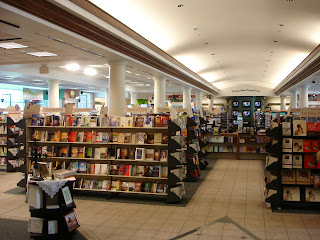 The current "Book of the Month" 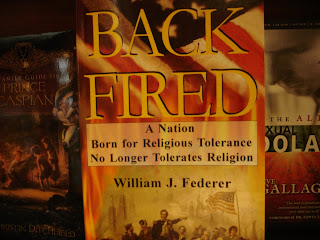 Art of the Revolution 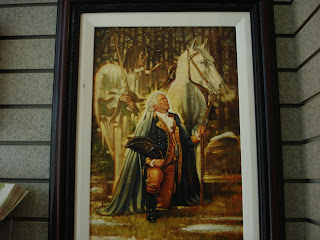 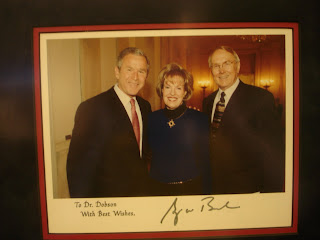 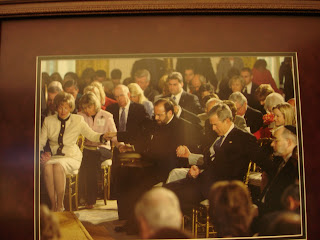 **FYI, I have intentionally withheld my personal opinions of this video and of Focus on the Family in general, so that you could make your own opinions without any influence on my part. Though I do not personally agree with a lot of what Focus on the Family stands for, particularly their take on early American history, I do want to emphasize that my visit to their Welcome Center was very enjoyable. I was impressed by their friendliness and assistance. Their facilities are extraordinary to say the least.**
Posted by Brad Hart at 11:46 AM

I'm sorry that the video is taking forever to download.

Before the liberals here take their predictable pot shots at Focus on the Family, it should be noted that Focus does A LOT of non-political ministry work. And this work has helped tens of thousands of families.

I've been thinking about Focus on the Family today because of James Dobson's comments about Obama. On his radio show, Dobson accused Obama of "deliberately distorting the traditional understanding of the Bible to fit his own world view."

What intrigues me about this statement is Dobson's confidence that his interpretation of the Bible is the "traditional" and, implicitly, correct/timeless understanding. I think that this appeal to a vague sense of an ill-defined "tradition" is one of the main strengths of Dobson's rhetoric. People want to feel that they are part of a long history of likeminded believers and that thought gives them comfort, security, and a rock on which to stand. You don't need to look to religion to see people appealing to their usable pasts — everyone who looks to the "Founding Fathers" for precedent on any issue is doing the same thing.

Where I think this becomes a problem is in the absence of historical thinking. Too often, "tradition" is assumed to mean "the way it has always been" rather than the historical trend of an idea or process. When I hear Dobson say that Obama is distorting the Bible to fit his worldview, I hear an ahistorical argument. Interpretations of the Bible are constantly shifting to reflect different people's worldviews. That's why the Puritans emphasized the Old Testament God over Jesus, spirit-driven movements eschewed the longstanding Protestant doctrine that revelation had ceased, and antebellum Southern Baptists found many exhortations for obedience to worldly masters. I don't think that Dobson actually believes that there is a single, historically constant interpretation of the Bible, but I do think that he understands that invoking the comforting thought of constancy in an ever-changing world goes over well with a population that has a very short historical memory and holds tight to many "traditions" that are actually fairly recent innovations.

I'm not a Christian, and when I was, I was a Catholic, so I'm not really sure what Dobson's argument about the Old Testament vs. the New Testament is. He seems to be saying that the Old Testament doesn't apply anymore and that we should only be following the New Testament. The reporter says, "Dobson and Minnery accused Obama of wrongly equating Old testament texts and dietary codes that no longer apply to Jesus' teachings in the New Testament." I'm sure that's a clumsy rendition of what he's getting at and I would welcome any comments that could explain it to me with more nuance — any understanding I have of Protestant theology is at least 200 years out of date. But if that is the essence of what he is saying, there are a bunch of seventeenth-century New Englanders who have a bone to pick with him.

And I hope this is not taken as a "pot shot." I disagree with Dobson on pretty much everything, but it's obvious that he is an important voice in American public life, and I am interested in his historical thinking.

Hi Caitlin, your comment is definitely not a "pot shot." It's a very thoughtful criticism.

I agree that many people appeal to "tradition" in a very superficial and self-serving way. I'm not sure that fits Dobson, but I agree it fits with a lot of people.

Your first comment about the non-partisan work that FOF does reminded me of something. Before I get to it, I want to stress the fact that these pictures do NOT do FOF justice, in terms of the sheer size of their facilities. The pictures of the admin building and welcome center are merely two of probably 15 or 20 buildings of the same size. They have everything from chapels to movie theatres, office spaces to play areas for kids.

Anyway, getting back to your point, one of the main buildings that is adjacent to the Welcome Center is where FOF's welfare and outreach centers are.

Caitlin also mentioned the ongoing Obama-Dobson feud. Something of note that you may be interested in, Caitlin is the fact that Dobson invited Obama to come visit FOF, and rumor has it that Obama agreed. Since Dobson is very unhappy with McCain's religious stance, Dobson has extended a welcome to Obama. Supposedly FOF will host a major gathering of all the big ministers here in Co. Springs. Rumor even has it that the former minister from New Life Church, Ted Haggard, who recently has returned to the Co. Springs area, will be in attendance.

I realize that NONE of this has anything to do with the blog's theme (sorry Lindsey) but since everyone brought it up first I thought it would be ok. I won’t go off on a tangent like this again!