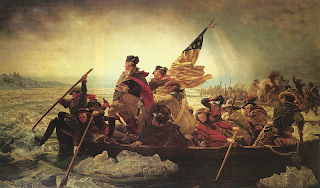 Merry Christmas everyone! As you enjoy the festivities, keep in mind that today also carries a special American tribute that should not go forgotten.

234 years ago on this date George Washington and the Continental Army made their daring advance on Trenton to attack the Hessian soldiers encamped at the city. The move was risky to say the least. Trenton was defended by 1,500 Hessian mercenaries, who were expecting to pass through a relatively calm winter encampment at the city. Washington, however, saw an opportunity to gain a moral victory (moral because winning Trenton was not a major tactical victory) for his army. After all, this was the same army that had been thoroughly routed by the British at New York, where they were forced to flee on a number of occasions. As a result, the Continental Army was in extreme disarray and Washington himself was being questioned by the delegates to the Continental Congress in Philadelphia. In fact, some even suggested that the General should be replaced for his poor performance at New York.

It was under these tough circumstances that Thomas Paine wrote the words to his epic pamphlet, The Crisis, which was written just two days before the planned attack on Trenton:

THESE are the times that try men's souls. The summer soldier and the sunshine patriot will, in this crisis, shrink from the service of their country; but he that stands by it now, deserves the love and thanks of man and woman. Tyranny, like hell, is not easily conquered; yet we have this consolation with us, that the harder the conflict, the more glorious the triumph. What we obtain too cheap, we esteem too lightly: it is dearness only that gives every thing its value. Heaven knows how to put a proper price upon its goods; and it would be strange indeed if so celestial an article as FREEDOM should not be highly rated. Britain, with an army to enforce her tyranny, has declared that she has a right (not only to TAX) but "to BIND us in ALL CASES WHATSOEVER" and if being bound in that manner, is not slavery, then is there not such a thing as slavery upon earth. Even the expression is impious; for so unlimited a power can belong only to God.

With such dire circumstances all around them, Washington decided to roll the dice. An attack on Trenton would secure a for the Continental Army a legitimate moral victory, one which would help to inspire the allegiance of more colonials to the cause of independence. Despite the benefits, Washington was not unaware of the tremendous risk he was taking. In a very real sense this was an all-or-nothing gamble (It is therefore no surprise that Washington would pen a note on his desk that read, "Victory or Death").

To make a long story short, Washington and the Continental Army won an astonishing victory at Trenton, capturing over 1/3 of the entire Hessian garrison. Since the Hessians expected a quiet winter encampment, they chose to enjoy the holidays by staying up late and drinking away their Christmas Eve. As a result, the army was caught asleep, hung over, and disorganized upon Washington's arrival. Here is a clip from the movie The Crossing, which captures the feel of that Christmas morning:

The Army then goes on to rout the Hessians at Trenton. In the process, only 2 continental soldiers lost their lives. In addition, only five were wounded (including James Monroe, who eventually became our 5th president).