Long before Freemasonry in Boston became – or allegedly became – a base of revolution in New England, the Craft consisted of Masons contentedly loyal to the Crown and its colonial governors. Remember, these are Masons descending from the Premier Grand Lodge (the “Moderns”), which cultivated close relationships with England’s nobility.

Bro. Jonathan Belcher (1682-1757) was made a Mason in London in 1704, and within a year had returned to Boston (he graduated Harvard in 1699) to live and pursue work as a merchant, making him the first known Speculative Mason in the Americas. (In 1682, a Scottish Mason named John Skene had emigrated to what is now Burlington, New Jersey, but he is remembered as an Operative Mason.) Belcher was from a prominent family, was successful in business, and was appointed by George II as governor of Massachusetts and New Hampshire in 1730, a position he held until 1741.


While there are clues pointing to Masonic activity in Boston c.1720, the first known Masonic lodge in Boston was named, appropriately enough, First Lodge, and was set to labor on August 31, 1733 at the Royal Exchange Tavern on King Street. It remains at labor today under the name St. John’s Lodge, and it is the oldest lodge continuously at labor in North America. (It is distinguished from Tun Tavern Lodge in Philadelphia in that it possessed a charter from the proper authorities in London, whereas the Tun Tavern brethren (Benjamin Franklin, et al.) were operating a few years earlier, but as “according to the Old Customs,” meaning without a charter or warrant.)

Governor Belcher was a member of First Lodge; I cannot find a date of his acception into the lodge, but his name appears on the lodge’s membership rolls dated 1736. As noted, Belcher exited the governor’s office in 1741. He later would become governor of the Jerseys, today’s State of New Jersey, settling, like Skene, in Burlington, and would establish Princeton University. Belcher Lodge No. 180 was chartered by the Grand Lodge of New Jersey in 1904. He was succeeded as Royal Governor by William Shirley (1694-1771) who was not a Freemason.

Of course the separation of Bro. Belcher from First Lodge did not go unnoticed by the brethren. The lodge records dated September 23, 1741 state (spelling hereby modernized):

Our Right Worshipful Master recommended to the Brethren that it was his opinion some particular order should be observed in toasting the health of our Right Worshipful Brother, the Honorable Mr. Belcher, and that a committee might be appointed as soon as possible to wait upon him, with acknowledgements from the Lodge of his past favors, and to return our thanks, etc.

Voted, that next after the Grand Master, the late Governor of this Province, is to be toasted in the following manner, viz: To our Right Worshipful Brother, the Honorable Mr. Belcher, Late Governor of New England with.... (There follows a shorthand description of a certain thrice hailed battery with which Masons are familiar.)

Voted, that our Right Worshipful Bro. [Thomas] Oxnard, Deputy Grand Master, [and] Brothers Phillips, Row, Price, Hallowell, Forbes, McDaniel, and Pelham, be a committee to form a speech, and wait upon the Honorable Mr. Belcher on behalf of this Society, and to make report of their proceeding the next Lodge.

On Friday, September 25, 1741, the Committee appointed by this Lodge waited upon the Honorable Mr. Belcher, etc., and made the following speech:

We, being a Committee by the Mother Lodge of New England held in Boston to wait on You, take this opportunity to acknowledge the many favors You have always shown (when in power) to Masonry in general, but in a more especial manner to the brethren of this Lodge, of which we shall ever retain a most grateful remembrance.

As we have had your protection when in the most exalted station here, so we think it is incumbent on us to make this acknowledgement, having no other means to testify our gratitude but this; and to wish for Your future health and prosperity which is the sincere desire of us, and those in whose behalf we appear, and permit us to assure You we shall ever remain

Honored Sir
Your most affectionate Brethren
and humble servants.

Peter Pelham, Secretary
on behalf of the Committee.

I take very kindly this mark of your respect. It is now thirty-seven years since I was admitted into the Ancient and Honorable Society of Free and Accepted Masons, to whom I have been a faithful Brother and well wisher to the Art of Masonry.

I shall ever maintain a strict friendship for the whole Fraternity, and always glad when it may fall in my power to do them any services.

This reply was printed in the Boston Gazette of September 28, 1741.

Bro. Belcher has descendants who are active in New Jersey Freemasonry today.

First Lodge met on Friday, October 23, 1741, and the minutes of this meeting show how a new address had been drafted for the new governor. (With spelling again hereby modernized):

May it please your Excellency,

We being a Committee appointed by the Antient and Honorable Society of Free and Accepted Masons of the Mother Lodge of America held in Boston, presume to wait upon you with the utmost sincerity, to congratulate your advancement to the Government of this Province, and to assure your Excellency that our desire is that your Administration may be successful and easy.

We have had hitherto the honor of His Majesty’s Governor being one of our ancient Society, who was ever a well wisher and faithful Brother to the Royal Art of Masonry.

And as it has been the custom for men in the most exalted station to have had the door of our Society’s Constitutions always opened to them (when desired) we think it our duty to acquaint your Excellency with that custom, and assure you, that we shall cheerfully attend your Excellency’s pleasure therein, and as we are conscious that our Society are loyal and faithful Subjects to His Majesty, so we may reasonably hope for your Excellency’s favor and protection, which is the request of

Your Excellency’s
most obedient humble servants.
Peter Pelham, Secretary
on behalf of the Society.

Governor Shirley replied to the lodge. The lodge records show: 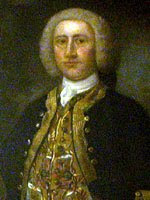 I Return the ancient and honorable Society my Thanks for their Address, and Invitation of me to the Mother Lodge of Free and Accepted Masons in America.

And they may rest assur’d that their Loyalty and Fidelity to his Majesty will always recommend the Society to my Favour and Protection.

This reply was printed in the Boston Gazette of November 3, 1741.

The Freemasonry of the Colonial era was a very complicated institution. The lodges existing in America at this particular time were spin-offs of the Grand Lodge of England founded June 24, 1717. As noted above in the Philadelphia instance, where Masons did not possess a lodge charter (or warrant) from that authority in London, they met anyway, as was done in the British Isles prior to 1717. However, in 1751 a second grand lodge was formed in England, and its membership was open to a wider segment of English society, including not only the elites of nobility, academia, and the military, but also successful professionals, artisans, and merchants. These were the so-called “Ancient Masons,” a nickname they gave themselves to describe their adherence to the rituals and laws of Masonry as they existed before 1717, when those Masons they dubbed the “Moderns” arose and made themselves known to the public.

By the time of the American Revolution, both of the English grand lodges were in competition throughout the colonies (indeed around the globe). The Ancients, with their more inclusive membership, grew larger and, in America, became recognized with the patriot cause, where the Moderns were firmly allied with the Tories/Loyalists. As the War of Independence ebbed and flowed throughout the colonies, lodges met in accord with the political fortunes of the moment. When British forces took New York City in 1776, Masonic lodges of Patriot sympathies ceased meeting, and lodges of “Moderns” flourished. Conversely, upon the British evacuation of New York, the Modern Masons were supplanted by Ancients. Arguably the most dramatic example of this rift arose upon the death of Benjamin Franklin in 1790. Ten thousand citizens paid their respects to this Founding Father, who was elected Grand Master of Masons of Pennsylvania on June 24, 1734. But the Freemasons of Pennsylvania declined to give Bro. Franklin any Masonic funerary rites. You see, the Grand Lodge of Pennsylvania by the time of Franklin’s death had become Ancient Masonry. Alas, Benjamin Franklin was of Moderns stock.

The point of all this is to demonstrate that Freemasonry has a long history of courting the favor of civil government, and that the common association of Freemasonry with revolution (American or otherwise) is not as simple as some claim. Masonry’s professed obedience to civil authority is not cynicism, but is a desire to enjoy the freedom of association necessary for Masons to meet in their lodges. Some historians trace this to 1425, when Henry VI (age three!) and Parliament enacted the Statutes of Laborers. These post-Plague laws regulated both the wages to be paid laborers and merchants and, in the case of Masons in particular, their ability to meet together. Excerpted:

I, for one, would not want to see the inside of a 15th century English “gaol.” This statute was repealed during the reign of Elizabeth I, but its legacy lived on as late as 1723, when the Rev. James Anderson authored Freemasonry’s first Book of Constitutions, which admonishes Masons:

“A Mason is a peaceable Subject to the Civil Powers, wherever he resides or works, and is never to be concern’d in Plots and Conspiracies against the Peace and Welfare of the Nation, nor to behave himself undutifully to inferior Magistrates....”

Submitted for your approval.
Posted by Magpie Mason at 3:30 PM


By the time of the American Revolution, both of the English grand lodges were in competition throughout the colonies (indeed around the globe). The Ancients, with their more inclusive membership, grew larger and, in America, became recognized with the patriot cause, where the Moderns were firmly allied with the Tories/Loyalists.

Surely you appreciate the irony, Brother Magpie, that whatever scheme men devise for "unity," no matter how fool-proof, it's never individual-proof.

Very true Tom! There's always someone who knows he has the best way of doing things.