Harry Jaffa: "Essence of God is known by Reason" 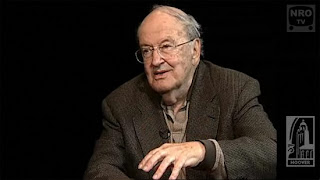 In an interview with "Uncommon Knowledge," scholar Harry Jaffa says that the "God of the Declaration of Independence" is based on reason, and that this "essence of God" is important to America's political institutions.

This understanding of God contrasts with that held by some people of faith, who elevate experience or anecdote over logic and study. According to Jaffa, the faith embraced by America's Founders was a rational one -- and one that helped inform their political principles.

Jaffa also argues that the dissolution of objective moral traditions is something that Karl Marx "wanted" and that, the more we abandon Judeo-Christian morality, the more we are "moving into a communist world."

**Check out Jaffa's "Uncommon Knowledge" interview by visiting this link.

The argument concerning the Founders' conception of moral principle is a theme that Jaffa has addressed many times over the years. Jaffa once stated: "The principles of the social contract are a means by which not only the authority of the people, but the authority of God becomes the authority of the law." ("Political Scholar Jaffa Defends Moral Foundation of Government" by Erik Lindstrum, The Daily Princetonian, Sept 30, 2003).

A professor emeritus at Claremont McKenna College in California, Jaffa is the author of A New Birth of Freedom: Abraham Lincoln and the Coming of the Civil War.
Posted by Brian Tubbs at 8:19 AM

It is a sad fact that when someone states-"If we abandon (insert religion) morality" my mind starts to shut down on anything else they may say. As an X-Xtian I know their morality and it SUCKS big time. But knowing that I can set it aside somewhat and Jaffa has some good points but overall just another apologist. ALL that is GOOD in America is from the secular, all I see bad is from the religious and with the 'little sheet heads' moving in it is going to get worse-and I have as much respect for the 'peaceful islamics' as I do for any 'peaceful religion' - NONE!

Brian, although my final conclusions tend to end up where Jaffa's are, I think his scholarship in philosophy and history is a total mess.

Here's Robert Kraynak dispatching Jaffa, via Leo Strauss, Aristotle, Aquinas, Jefferson and Lincoln. I know Jon and Phil are interested in this line of argument and the history of ideas.

TVD - the URL doesn't go anywhere (tried copying and pasting twice). Can you re-post or post the citation?

Ah, JRB, thx. I was hoping someone would actually try to check it out.

I used the PDF; the HTML works, but isn't as easy to read.

TVD - thanks, that worked. It's now in the queue.