Conference on Ellen White and the Seventh-day Adventists 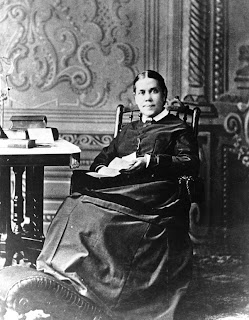 Over at Religion in American History, Randall Stevens and Amanda Porterfield have written a couple of interesting posts on the Conference of Ellen White, which took place this past weekend in Portland, Maine. And while White has very little to do with the actual American founding, she was an extremely provocative and influential figure in American religious history and helped to shape the Christian landscape of 19th century America.

As co-founder of the Seventh-day Adventist Church, White's life and legacy are of paramount importance to the doctrine and beliefs of over 15 million adherents world wide. In fact, her works (often referred to as the "lesser light") are regularly read in conjunction with the Holy Bible ("greater light") and are accepted as official doctrine of the church.

And though this blog focuses primarily on 17th and 18th century issues, I think it would be a mistake to omit Ellen White and the Adventists from our ongoing inquiry into religion and the founding, and the Conference on Ellen White provides us with a unique chance to do just that.

At this conference, a group of specialists on Ellen White and the Adventists, have collaborated on a joint book effort (to be published by Oxford University Press), which they hope will help shed light on this often forgotten figure of American religious history. As Randall Stephens (who attended the conference) states:

I know so little about White and Adventism—something I found on further investigation that I share with other participants Spencer Fluhman, Peggy Bendroth, and some others—that I hesitated to take part at first. But the organizers hoped that those outside the field would ask broad questions about research and writing. I rushed to my library to read Ron Numbers’s bio Prophetess of Health: A Study of Ellen G. White. Yet, I only had time to crack the book. So, into the breach. The papers/chapters have been fascinating. I never knew how much White, and her contemporary Adventists, was wrapped up in sex reform, visionary mysticism, the shouting Methodist tradition, hydrotherapy, vegetarianism, creationism . . . and on and on. Panels have been asking about the 19th-century context of Adventism, the legacy and influence of White, and the role of emotion in religious experience.

In addition, Amanda Porterfield posts two of the more provocative questions brought up during the conference:

Randall Stephens posed the question, how did Ellen White build a movement out of the discredited wreck of the Millerite movement, and in the face of public scorn? Part of the answer is that her husband and other handlers enabled her success. Her own interpersonal and organizational skills obviously contributed to her authority, and to the authority of her visions. Her emphasis on the Saturday Sabbath enabled believers to separate themselves from others, and also to raid mainline protestant groups for recruits. Both recruits and longtime members relished the perfectionist discipline that promised to bring them into close relationship to heaven. This dynamic allowed for reversing scorn visited on Adventists back onto others.

Spencer Fluhman asked the question, why was Ellen White reproached and vilified by people outside of her movement? Clues to the answer might be found in protestant narratives that instantiated the fiction of mainstream Christianity and used Adventism, like Mormonism, as a foil against which “American” Christianity could be defined. White participated in this dynamic with some enthusiasm, even as her self-proclaimed alterity exerted its own pressure on American society, and on protestant denominations, especially with respect to temperance, diet, and health.

Interesting questions on an important and often ignored religion that has had a dramatic impact on American Christianity.
Posted by Brad Hart at 8:55 AM