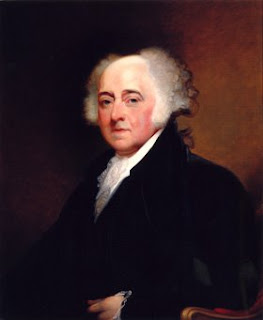 Those who argue that the United States was intended to be a wholly secular nation with no official acknowledgment of God or religious principle love to hold up the Treaty of Tripoli, a document from the Adams era, that declares the United States NOT to be a "Christian nation." These same secularists, however, don't often mention the 1798 proclamation, which Mr. Adams signed, that called on the American people to observe a day of "day of solemn humiliation, fasting, and prayer."

The proclamation reads in part:

"I...recommend...that Wednesday, the 9th day of May next, be observed throughout the United States as a day of solemn humiliation, fasting, and prayer; that the citizens of these States, abstaining on that day from their customary worldly occupations, offer their devout addresses to the Father of Mercies agreeably to those forms or methods which they have severally adopted as the most suitable and becoming; that all religious congregations do, with the deepest humility, acknowledge before God the manifold sins and transgressions with which we are justly chargeable as individuals and as a nation, beseeching Him at the same time, of His infinite grace, through the Redeemer of the World, freely to remit all our offenses, and to incline us by His Holy Spirit to that sincere repentance and reformation which may afford us reason to hope for his inestimable favor and heavenly benediction."

**
***For the complete text of President Adams' proclamation, click here.
**

Adams offered this proclamation at a time when tensions were heating up with France. The President wanted peace, and would, in fact, sacrifice his presidency to achieve it. But he felt an almost irresistable pull toward war, as passions and events on both sides of the Atlantic were clearly guiding the United States to war with its former ally.

When faced with such a crisis, Adams and the Congress did what Americans have done throughout history -- turn to God and prayer in times of crisis.

While I'm not making the claim that this proclamation proves the United States was founded as an evangelical Christian nation, I do wish to point out that the American government AND people of 1798 had little problem with a national call to prayer and fasting.

What's more, the language of Adams' proclamation was very similar to that employed in previous calls for prayer, particularly during the Revolutionary War, when the Continental Congress and various state assemblies repeatedly urged the nation to pray.

While I do not wish for our focus to get too much into Adams' personal faith, I find it interesting that, in this proclamation, he refers to the Trinity, even alluding to Jesus as the "Redeemer." Adams himself was more aligned with Unitarianism. That he questioned the deity of Jesus and his resurrection is well documented.

Regardless of that apparent inconsistency, Adams was comfortable using Christian language and would be portrayed by his supporters as a devout Christian compared to the "atheism" of Thomas Jefferson in the 1800 presidential election. (Jefferson, of course, was no atheist, but political campaigns have always be given to exaggeration).

Whether Adams was a Trinitarian Christian or Unitarian is not material to this particular discussion, however. What should be emphasized is that Adams believed in prayer and had no problem using his position as President of the United States to call the nation to prayer.

In that sense, John Adams would be most comfortable today with our National Day of Prayer.
Posted by Brian Tubbs at 7:36 AM

1.) I think it's important that we recognize the sometimes "erratic" behavior of Adams. So often, Adams contradicts himself in his writings on an assortment of issues. His writings are full of highs and lows, positives and negatives. As I've stated before, John Adams probably would have benefited from Prozac...though I doubt that he would take it!!! =)

2.) This is a good illustration of the claim that America is not a CHRISTIAN nation but instead is a RELIGIOUS nation...a thesis I tend to support. It fits nicely with Franklin's "public religion" and Jefferson's "Natural religion." Clearly Adams is invoking that same spirit. I guess what I am saying is let's not throw out the Treaty of Tripoli OR the Adams prayer declaration. They both, when taken together, support the notion that America is a religious (but not Christian) nation.

Must we be “Regardless of that apparent inconsistency” between Adams’s personal religious views and how he presented himself to the country? That strikes me as one of the most interesting aspects of religious thought and behavior among the Founders.

Isn’t it significant that authority figures like Adams and Washington advised the populace to pray or attend churches when they weren’t so devout in their private lives?

Did they view religious habits as necessary for the masses, but not for members of the elite like themselves?

Were they making conscious choices to mask their own beliefs in order to maintain their public images of rectitude, and/or their political standing?

Are you suggesting that the founders (like many leaders today) used religion to promote their own political careers? NOOOOOOO!!! I don't believe it. That's just crazy!!! =)

Did they view religious habits as necessary for the masses, but not for members of the elite like themselves?I don't think that's entirely true. I think, to some degree, Brad's interpretation is correct.

I think, and correct me if I'm wrong, that the FF's recognized the impact that the support of the religious community could have.

The shifting definition of what tyranny was and who the tyrant was (from the Catholic French to the English monarchy) made it very convenient, and gave them the right language, for religious leaders of the time to lead their congregations to support the Revolution and the new American government.

I think the FF's knew that and, yes, to some degree used it to their advantage to hold the fragile new nation together.

.
The next time you feel you would like a government executive to publicly declare anything that may be of interest to you by an official proclamation, prepare it and present it to the official. As long as your desires are not for something that could be upsetting to the peace and tranquility of society, you almost certainly will have your proclamation.
.
My question regarding President Adams' proclamation would be, "Who presented it for his signature?"
.
Also, I think it is interesting that Brother Tubbs used the word, secularists, in his opening paragraph as though that would have some sway on the reader. The word has been used in such negative ways that it seems to sanctify the idea that America WAS intended to be a Christian Nation--in a way, sort of getting around the First Amendment. And, if it IS sanctified, no one had better raise their voice against it.
.
The same strength of Brian's post could have been demonstrated by any of the many proclamations that are made in contemporary society these days--have been ever since I can remember.
.

The term "Christian Nation" means different things, depending upon context. The secular minded use it to point out the US is not a Theocracy. Many Christians use the term to describe the nominal faith of our founder and our present citizens.

Meaning, I think the context is that we are a proportionately a religious people, but are governed by secular laws (as opposed to sectarian laws). Thus, we can embrace sectarian motivations, but the law should be justified by secular language.

That said, I don't see a problem with a national call to prayer and fasting, provided there is no mandate that it be observed, and that its larger effect on the nation is objectively positive.

Regarding John Adam's "erratic" behavior, this attribute was recognized in his day as well.

Whatever "Christian Nation" means (and shortly I hope to try to spell that out), nothing in the "Treaty" of Tripoli should be taken as sincere. The "Treaty" was a standard formalism of the time for paying extortion money to pirates. We were, literally, on our knees, saying whatever the nice pirates wanted us to say as we paid them good money for the privilege of, well, nothing.

There were dozens of such "treaties" signed by various nations in the 18th century and into the first years of the 19th, but none of them were actual, you know, treaties. They were part of the kabuki that went with international extortion, all pomp and pageantry meant to puff up the standing of the pirates.

Kristo: "There were dozens of such "treaties" signed by various nations in the 18th century and into the first years of the 19th, but none of them were actual, you know, treaties."

However, even if there is evidence for various of nations signing dozens of treaties what does that have to do with *our* Nation, and the Treaty of Tripoli?

Ha. Thx for the links, Ben. My own impression of Adams as a flibertygibbet was based solely on reading his writings for myself, but it's nice to get some contemporaneous corroboration.

Adams was a driving figure in the revolution itself, but I think he was kind of a Zelig thereafter.

Tom, I'd have posted more on this aspect of Adams quite a while ago, but did not realize you were unfamiliar with it.

I had read a good article on that subject about 2 yrs back, but cant' find it now. If I come across it, I'll send it to you.

Thx. You linked to Hamilton on Adams once, but that's all I'd seen.