‘Freemasonry and the Quest for Liberty’

If you will pardon this unabashed publicity for an upcoming event in New York City, it does involve the Founding, and promises to discuss political liberty as a “spiritual value.”


At the Chancellor Robert R. Livingston Masonic Library
at the Grand Lodge of New York:

Freemasonry and the Quest for Liberty:
An Evening with James Wasserman. 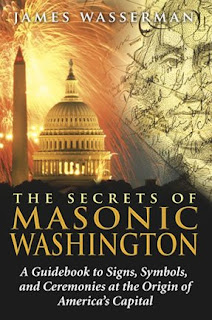 Join us for a lecture, discussion, and book-signing with James Wasserman, the bestselling author of “The Secrets of Masonic Washington: A Guidebook to Signs, Symbols, and Ceremonies at the Origin of America's Capital.”

He will share his thoughts on the crucial role Freemasonry played in the development of political liberty worldwide, and especially in the founding of the American republic. He will explore the idea that political liberty is a spiritual value, tracing its history from biblical times.

“The Secrets of Masonic Washington” provides an exquisitely illustrated tour of the spiritual, esoteric, religious, and mythic symbols of our nation's capital. From the magnificent monument erected to Freemason and first President George Washington, to the classic pantheon built to honor Enlightenment philosopher and Declaration of Independence author Thomas Jefferson, Washington, D.C. is a hymnal in stone.

This book is an archaeological expedition to a “lost city” whose mystical treasures and traditions are hidden in plain sight, a city designed and built as the beating heart of a spiritual entity that transcends all religions, whose very streets invoke the invisible energies that drive the evolution of human consciousness, a city inspired by a civic priesthood we know today as Freemasonry.

The $20 cost of the book includes a donation to the Masonic Library.

Well, it's my custom to never let such commercials go unanswered, Brother Magpie, even if Masonry isn't exactly a religion.

This also ensures that everybody hates my guts. But that's OK---pass the hemlock, Socrates.

So, as The Church Lady might ask, perhaps George Washington worshiped...SATAN?

Oh my, how I love the internet.