Founded as a Christian Nation?! Part the Millionth

Thomas Paine published Age of Reason in 1794, advancing a decidedly unProvidential and therefore unChristian God---remote to the point of disconnectedness---and attacking the Bible as fable and fantasy. He received almost universal condemnation from the new American nation, including from Samuel Adams, erstwhile brewer, semi-"key Founder," and of course, cousin of the 2nd president.

"[W]hen I heard that you had turned your mind to a defense of infidelity, I felt myself much astonished and more grieved that you had attempted a measure so injurious to the feelings and so repugnant to the true interest of so great a part of the citizens of the United States.

The people of New England, if you will allow me to use a Scripture phrase, are fast returning to their first love. Will you excite among them the spirit of angry controversy, at a time when they are hastening to unity and peace?"

Now, this might indicate that even if there was a re-swell of religious affection happening, the immediate post-Founding landscape was not one of church-going holy rollers.

"Our friend, the President of the United States [Thomas Jefferson], has been calumniated for his liberal sentiments, by men who have attributed that liberality to a latent design to promote the cause of infidelity. This and all other slanders have been made without a shadow of proof."

Interesting in that clearly, Jefferson's differences with orthodox Christianity were still denied by many of his supporters.

We may read this as indicating that the Founding landscape obliged public figures to keep their religious unorthodoxies to themselves if they wanted to remain public figures. Indeed, nearly all of Jefferson's repudiations of Christian orthodoxy appear in his private letters, and only after he'd left office.

Was the United States founded as a Christian Nation? The answer is definitely yes. And definitely no. It already was Christian, more or less, at least enough that Jefferson had to hide his differences with normative Christian doctrines.

As for Paine himself, the full correspondence with Samuel Adams may be found here. Paine even claims to have tried to save the revolutionary French from atheism*! Who'd a-thunk it?

"There is however one point of union wherein all religions meet, and that is in the first article of every man's creed, and of every nation's creed, that has any creed at all: I believe in God. Those who rest here, and there are millions who do, cannot be wrong as far as their creed goes. Those who choose to go further may be wrong, for it is impossible that all can be right, since there is so much contradiction among them. The first therefore are, in my opinion, on the safest side.

Since I began this letter, for I write it by piece-meal as I have leisure, I have seen the four letters that passed between you and John Adams. In your first letter you say, 'Let divines and philosophers, statesmen and patriots, unite their endeavors to renovate the age by inculcating in the minds of youth the fear and love of the Deity and universal philanthropy.'

"Why, my dear friend, this is exactly my religion, and is the whole of it. That you may have an idea that the "Age of Reason" (for I believe you have not read it) inculcates this reverential fear and love of the Deity I will give you a paragraph from it.

"As I am fully with you in your first part, that respecting the Deity, so am I in your second, that of universal philanthropy; by which I do not mean merely the sentimental benevolence of wishing well, but the practical benevolence of doing good. We cannot serve the Deity in the manner we serve those who cannot do without that service. He needs no service from us. We can add nothing to eternity. But it is in our power to render a service acceptable to Him, and that is not by praying, but by endeavoring to make his creatures happy."

This is the God of Deism---unremarkable in today's world of mushy theistic secularism, but Paine stood virtually alone with Him in the Founding era. Even Jefferson himself, who was supportive of Paine's freedom of conscience [and who shared Paine's disdain for things like the concept of the Trinity and the miracles of the Bible], believed in a Providential God who was quite interested in man's affairs, a God Who smiled on the virtuous and withheld His favor from the wicked. Jefferson was no Deist, and people should stop saying it, because it's not true.

More on that later perhaps, but one need only look at the Jefferson Memorial for starters. Jefferson says "I tremble for my country" at the thought that his just and providential God might not abide the obscenity of slavery for very long. 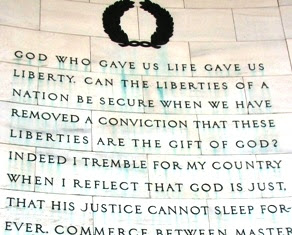 ___________________
*"In the second place, the people of France were running headlong into atheism, and I had the work translated and published in their own language to stop them in that career, and fix them to the first article (as I have before said) of every man's creed who has any creed at all, I believe in God."
Posted by Tom Van Dyke at 3:27 PM

"This is the God of Deism---unremarkable in today's world of mushy theistic secularism, but Paine stood virtually alone with Him in the Founding era."

What does "virtually alone" mean? There was also Ethan Allen, Elihu Palmer and that guy that Matthew Stewart uncovered whose name escapes me.

Exactly. ;-) Some mook up in Vermont or something, who gives a spit...? And I did say "virtually," not literally.

Indeed, in his autobiography, our brave deist [or whatever] Ethan Allen has himself demanding the surrender of Ft. Ticonderoga

"In the name of the Great Jehovah and the Continental Congress!"