"There is, moreover, another enemy at home. That enemy is the mean and petty spirit that mocks at ideals, sneers at sacrifice and pretends the American people can live by bread alone. If the spirit of God is not in us, and if we will not prepare to give all that we are to preserve Christian civilization in our own land, we shall go to destruction." 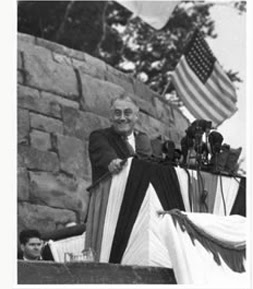 In the 21st century, his party would call him some sort of nativist bigot.

[Crossposted at newreformclub.com]
Posted by Tom Van Dyke at 3:40 AM

"In the 21st century, his party would call him some sort of nativist bigot."

Jimmy Carter? Elected 40 years ago? The guy who hates Israel?


Barack Obama? Whose church had a "Black Value System?"


Who declared legal war on the Little Sisters of the Poor?

"Preserve the Christian civilization in our land." You know as well as I do your party would never have such a thing.

After they took heat for omitting any reference to “God” in their platform, and for eliminating language from the 2008 platform that identified Jerusalem as the capital of Israel, Democrats tried to add the language back into their party platform with a voice vote.

But when Los Angeles Mayor Antonio Villaraigosa, the convention chairman, came to the podium to ask for the approval of the delegates, those who shouted opposition to the language change were as loud, if not louder, than those who voiced their support.

Villaraigosa, in what quickly became an awkward moment, asked for the voice vote three times in all. After the second time, he paused for several seconds and looked behind him for guidance from a convention staffer — possibly a parliamentarian — before turning back and asking for a third vote.

Even though the no’s were again as loud if not louder than the aye’s on the third vote, Villaraigosa said he had determined that two thirds of those present had voted in favor. Boos filled the arena in response.


Try getting real and show anything remotely like what FDR said coming from the mouth of a contemporary Democrat. You can't. Your party finds the idea of "Christian civilization" unacceptable.

President Barack Obama, a sincerely devoted family man and Christian that does not hesitate using Christian imagery in his job, as a beacon of hope? That party?

His congregation in Chicago peddled Africanisant political tripe. There's a reason Oprah Winfrey could only tolerate Jeremiah Wright for so long. BO stuck around for 20 years.

And where was he going to learn anything about orthodox Christianity of any sort? He spent all of 9 weeks in the same city with his father during the 21 years they were on this Earth together. His mother was a vociferous atheist as an adolescent in the Seattle exurbs and his grandfather hadn't a serious idea in his head about religion or any other matter (so joined a Unitarian congregation, natch).

As for Jimmy Carter, someone once said his opinion was that of the last person who spoke to him. (Except, of course, when his pride's at stake). If anyone had any doubt that he adhered to no viewpoint which would cost him with the world's bien-pensants, the last couple of years should have disabused one of the notion.

Try getting real and show anything remotely like what FDR said coming from the mouth of a contemporary Democrat. You can't. Your party finds the idea of "Christian civilization" unacceptable.

In response to which you have not one factual point to make.

Interestingly, Jimmy Carter's the only Democrat who has occupied the office in the last century whose Christian profession was not carrying with it some serious anomalies or lacunae. Woodrow Wilson was hostile to blacks (at a time when there were about 50 lynchings a year in this country), Franklin Roosevelt belonged to a masonic lodge and had a penchant for women he wasn't married to, Harry Truman (a fine son, brother, husband and father) held a position of importance in his Masonic order (and stacked the Supreme Court with masons); John Kennedy coupled with anything that did not have four legs, corrupted the Secret Service in his constant pussy chase, and pimped a 19 year old WH intern to David Powers; Lyndon Johnson was another serial adulterer who put the Secret Service to work for him, but with a lower partner count; and Bill Clinton, friend of Jeffrey Epstein, once told one of his state police guards that Gennifer Flowers could suck a tennis ball through a garden hose.


But now Jimmy Carter tells us that, upon mature reflection, he finds scripture blesses homosexual pseudogamy. How very conveeenient. Kevin Eckstrom and the folks at Religion News Service are all but on the payroll of the Arcus Foundation; do what ya gotta do. What's Jimmy's excuse?

In my own experience I have found "Religion News Service" to attract an inordinate number of folks baldly hostile to the Christian religion whenever it strays from the Democratic Party platform. Puzzling, to say the least.

Religion New Service I believe was once a subsidiary of the National Council of Churches. I'd say it's current editorial line and interests roughly reflects the Wallis-Campolo wing of evangelicalism, or would if their donors were not dictating editorial policy. Kevin Eckstrom has spent about 85% of his adult life running it. They receive 55% of their budget from the Arcus Foundation, run by the notorious Kevin Jennings. I started reading it out of curiousity because Omid Safi had a column there, now discontinued. I do not care for his public writings, but I was once an acquaintance so was mildly interested for that reason (I think Robert Spencer and Daniel Pipes misperceive Safi, FWIW). I read it for a while until they banned me.

This kind of quote-mining isn't all that helpful one way or another.