President Washington and the 'Masonic Bible'

I had the good fortune to be in the presence of a certain Bible on Friday night, one that has been discussed on American Creation before. A cherished, priceless document we in Freemasonry call the George Washington Inaugural Bible was brought to a local Masonic lodge in New Jersey to display during a ceremony.
I just want to offer a quick post today to share a perspective that is new to me. Two, actually, but I'll begin at the beginning.
The George Washington Inaugural Bible, a King James Version containing the Old and New Testaments, has been owned by St. John's Lodge No. 1, Ancient York Masons, in New York City since the lodge purchased it from Baskett printers in London in 1767, for use as the lodge's altar Bible. It earned its nickname because on April 30, 1789, George Washington took his first presidential oath of office with his hands resting on the pages of this Bible, opened to Genesis 49-50, in a ceremony on Wall Street.
In a fraternal order that cherishes its history and its artifacts, this holy text enjoys a unique standing; whereas those Founding Fathers who were members of Masonic lodges left this world long ago, this Bible serves as a portal that grants us today the chance to touch them in their day. Well, almost. The Bible is handled only by select members of St. John's Lodge when they travel with it on the very few occasions it is allowed to travel. But it does travel, unlike so many other pieces permanently encased in glass or locked in vaults, never to reach their full value as educational tools and cultural touchstones.
One of those guardians on Friday night was my friend and Brother Piers Vaughan, who addressed the audience of approximately 150 to tell the history of this Bible, and his own thoughts on why this particular text came to hold its singular significance.
Piers spoke of how the preparations for Washington's inauguration were planned to the most minute detail, even down to the quantities of hay and water required to refresh the horses in the procession. How could it be that the very instant of inauguration could be bereft of a Bible? It is a depth of thoughtlessness that seems too improbable to be taken seriously. Instead, argues Piers, the president-elect himself fashioned "an elegant solution" to a potential political and religious misstep. With the new American states characterized by different sectarian beliefs, the choice of one holy text over another in the performance of this swearing-in ceremony could have had repercussions throughout the land. But because of the very high esteem in which the public regarded Freemasonry, Washington's choice of a "Masonic Bible" would have been appreciated as the best obtainable ecumenical solution to the ceremonial dilemma.
And the second point that caught my ear Friday night was the ranking in which Piers placed this Bible in political and civic importance: third, after only the Declaration and the Constitution.
His reasoning is because Washington was created president of the United States with the assistance of this Bible, the Executive Branch of U.S. government was thereby embodied by him that very moment. Enlightened by this view, I now see the aspiration of the Declaration of Independence as prelude to the covenant of the Constitution, rendered in the flesh as a civilian, temporary, and elected chief executive.
▲▼ ▲▼ ▲▼ ▲▼ ▲▼ ▲▼ ▲▼ ▲▼ ▲▼ ▲▼ ▲▼ ▲▼ ▲▼ ▲▼
In other New York City news, I invite all the readers of American Creation to attend a lecture at Fraunces Tavern Museum on Thursday, January 19 at 6:30 p.m. 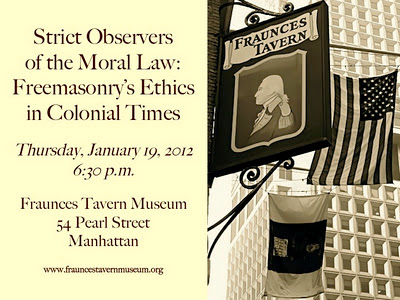 Most people are aware that Freemasonry is a centuries-old society cloaked in mystique, its brethren ever present in the sweep of history, but what exactly do Masons profess? Did Freemasonry inspire the War of Independence? Were all the Founding Fathers members of the Masonic fraternity? Drawing from period literature, and with an insider's understanding of how Masonic lessons are imparted, Jay Hochberg, an officer in New York City's only Masonic lodge of research and education, will define and contextualize the Colonial Freemason's bond to his neighbor, his government, and his god.

Seating is limited to about 60, and no advance reservations are taken. Tickets are sold, at $10 per person, at the door. I'll be sure to publish a summary of my remarks here on American Creation after the event.
Posted by Magpie Mason at 9:41 PM

This is FANTASTIC stuff. Thanks for posting!

Really? I was just kind of throwin' it out there to let you know I'm still alive. lol But thanks Brad!