David Cameron: "The U.K. is a Christian Nation" 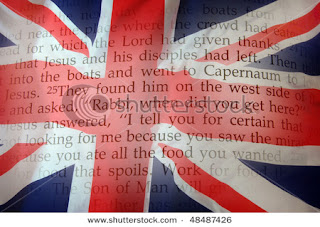 In a speech delivered last week at Oxford for the 400th anniversary of the King James Bible, British Prime Minister David Cameron called for a "revival" of Christian values to counter Britain's "moral collapse." "We are a Christian country and we should not be afraid to say so" stated Cameron to an audience of more than 3000. Cameron also stated that he was a man "full of doubts" when it came to matters of faith, but that he was, nonetheless, a Christian:

I am a committed – but I have to say vaguely practising – Church of England Christian, who will stand up for the values and principles of my faith, but who is full of doubts and, like many, constantly grappling with the difficult questions when it comes to some of the big theological issues

But what I do believe is this.

The King James Bible is as relevant today as at any point in its 400 year history. And none of us should be frightened of recognising this.

We are a Christian country. And we should not be afraid to say so. Let me be clear: I am not in any way saying that to have another faith – or no faith – is somehow wrong. I know and fully respect that many people in this country do not have a religion. And I am also incredibly proud that Britain is home to many different faith communities, who do so much to make our country stronger. But what I am saying is that the Bible has helped to give Britain a set of values and morals which make Britain what it is today.

Responsibility, hard work, charity, compassion, humility, self-sacrifice, love, pride in working for the common good and honouring the social obligations we have to one another, to our families and our communities, these are the values we treasure. Yes, they are Christian values. And we should not be afraid to acknowledge that. But they are also values that speak to us all – to people of every faith and none. And I believe we should all stand up and defend them. Those who oppose this usually make the case for secular neutrality. They argue that by saying we are a Christian country and standing up for Christian values we are somehow doing down other faiths.

But not everyone agrees:

If values of a Christian country are shared by people of all faiths why the need to specifically label the country Christian? Why not say that we share a common morality and common values? Call it humanism, call it whatever you want - don't call it anything at all. Only this will unite us.

the only reason to evoke Christianity is a desperate attempt to address the declining morality. But he falsely makes the classic polar argument 'it must be either this or god', just as people assume it must 'science or god'. There are alternatives - it just takes just a little bit of forward thinking and trust in mankind's ability to be a moral being.

Firstly, the UK is not a Christian country except constitutionally - the Queen being the Head of State and the Head of the Church of England. We are not even a practising religious country.

Secondly, the morals of the bible are, to put it generously, 'confused'.

Thirdly, in any event, Christianity is not the basis of even the good parts of our 'moral code' given that concepts such as the 'golden rule' (like it or loathe it) pre-date monotheistic 'Abrahamic' religions by some distance.

To be honest, I tend to side with Cameron on this one. One doesn't need to be an expert in British history to recognize just how important Christianity has been on Great Britain (and Europe in general). Heck, in many respects Christianity pre-dates the establishment of England, and certainly of Great Britain and the U.K. From Catholicism to Henry VIII's break with the church, from Elizabeth I's creation of the Church of England to the Puritans, Protestants, Methodists, Baptists, etc., etc., etc., the United Kingdom has a rich Christian heritage AND founding.

So how does this relate to the United States?

Obviously the history of Britain and the U.S. are joined at the hip, however, I still maintain that the United States, though incredibly religious in its own right, has a different founding than Europe. As I stated in a post a while back, America's PLANTING is certainly Christian in many respects (the Puritans being the prime example). However, America's FOUNDING was something different entirely.

Of course, much of this debate boils down to semantics: what constitutes a "Christian", what constitutes a "Nation"? I maintain that if we look at America's founding from a traditional orthodox Christian perspective we cannot conclude that America was founded as a Christian nation (though England certainly was).
Posted by Brad Hart at 11:06 AM

Great stuff Brad. It's always helpful to remember that America rebelled against a nation that was arguably more of a "Christian Nation" than America was; at least in an official sense.

The religious sought refuge on our shores. And isn't this what was respected by the Founders, who "created" the Establishment Clause? The LEGISLATIVE BRANCH could not impose or favor any religious framing, as our country believes in liberty regarding religious convictions. BUT, our country WAS mainly rooted in the Judaic Christian tradition, as to religious persuasion.

America is and never was officially a Christian nation, as the UK is, with its established Church of England.

But even Christian Nation apologists don't make the argument that it is or was, "officially."

The rest is a philosophical and cultural/sociological argument, that of "ethos," how America was and sees its underlying principles.

In fact, that's Cameron's argument here, not that Britain is "officially" a Christian nation [even though I suppose it is].

America's Christian nation argument isn't that it was "founded" as a Christian nation, but that it already was one, and the ratification of the Constitution and establishment of a formal national government in 1787 did nothing to change that.

In fact, dating the history of the American nation from 1787 is a primary flaw of the "godless" Constitution argument.

"In fact, dating the history of the American nation from 1787 is a primary flaw of the 'godless' Constitution argument."

Good article, Brad. Well done. I too agree with Cameron.

As to your point about making the distinction between America's planting and America's founding, I would say this....