And I Feel Fine 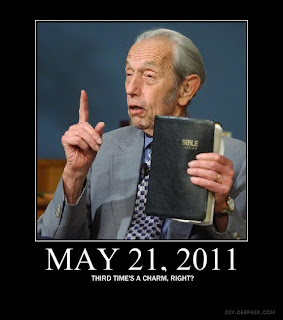 Today is the Rapture! That's right, in only a few hours time the world's righteous will be called up into heaven while the rest of us heathen, Theistic Rationalist, infidels are forced to roam the earth, lamenting our foolish choice to not believe in Harold Camping's apocalyptic prediction. Let the weeping and gnashing of teeth begin!

This rapture hype has been a unique anomaly to follow. I guess that in light of the other apocalyptic predictions that are hovering about (i.e. the Mayan calendar, climate change, the swine flu, etc., etc., etc.) none of us should be all that surprised when we see Camping receiving all kinds of media attention. And even though the overwhelming majority of us accept the reality that Camping is an obvious fraud and that we can all expect to return to work come Monday, I am amazed at how many "experts" are weighing in on such a silly little story. Everyone from historians to scientists, theologians to sociologists have added their $0.02 to the ongoing rapture dialogue, providing detailed insight as to why we can look forward to yet another Halloween, Thanksgiving and Christmas season.

But none of this is new.

Ever since our conception as a nation, Americans have been anxiously awaiting the end of days that have been prophesied of since the beginning of Christian theology. Whether it has taken the form of Christopher Columbus' bold prediction that Jesus Christ would return after the "savage" Indians of the New World were converted to Christianity, The Shakers, who predicted that the world would end in 1792, or Charles Wesley (one of the founders of Methodism) who declared the end of the world to take place in 1794, apocalyptic predictions have been a major component to American religious DNA. Heck, even some of our nation's most skeptical founders couldn't help but be interested in all the end-of-days rhetoric whirling around them:

Although you and I are weary of Politicks, You may be surprised to find me making a Transition to such a Subject as Prophecies. I find that Virginia produces Prophets as well as the Indiana Territory...they are not much more irrational than Dr. Towers who wrote two ponderous Vollumes...to prove that the French Revolution was the Commencement of the Millennium, and the decapitation of The King of France but the beginning of the series...the King of France who had been executed, was the first of the Ten Horns of the great Beast...Napoleon is Antichrist...the City of London is or is to be the Head Quarters of Antichrist.

(John Adams to Thomas Jefferson, February 10, 1812).And though the list of former doomsday practitioners could go on for volumes, I would like to focus on one particular apocalyptic prediction that seems to have a few similarities to the one we have today. 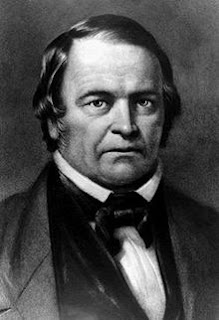 The Story of William Miller

Most Americans have probably never heard of William Miller. Miller (whose teachings eventually led to the creation of Seventh-day Adventists, Advent Christians, Millerites and even Jehovah's Witnesses) was a Baptist preacher from the early 19th century. While living in New York during the era we call the Second Great Awakening, Miller became deeply troubled by the Christian doctrines surrounding death and the afterlife. As a result, Miller actually spent a brief period of his life juggling between the doctrines of deism and Protestant Christianity. After a few years of sincere study, however, Miller became convinced that Jesus Christ was indeed the Savior of mankind. As he stated in hisApology and Defence:

Suddenly the character of a Savior was vividly impressed upon my mind. It seemed that there might be a Being so good and compassionate as to Himself atone for our transgressions, and thereby save us from suffering the penalty of sin. I immediately felt how lovely such a Being must be; and imagined that I could cast myself into the arms of, and trust in the mercy of, such an One.

In addition to accepting the entirety of Jesus Christ's human sacrifice for the sins of mankind, Miller also came to the conclusion that the Bible itself foretold of his eventual return to the earth; his "Second Advent" as it was called. In a manner similar to that of Harold Camping today, Miller somehow deciphered the hidden chronology inside of the Bible, which revealed the date that Christ could be expected to return. Relying on a passage from the Book of Daniel (8:14 to be exact), Miller eventually came to the conclusion that Jesus Christ's Second Coming would take place in the year 1844. Eventually Miller and his "Millerites" would narrow it down even further, hailing October 22, 1844 as the official date.

Of course nothing of note happened on October 22, 1844. In what became known as "The Great Disappointment", Miller and his followers were forced to accept the reality that Jesus Christ had not returned to the earth. Long story short, Miller's credibility was shot and he and a large number of his followers faded away into oblivion (it is worth noting that Miller never gave up on his hope for the "Second Advent". He vehemently defended his beliefs all the way to his death in 1849).

What is interesting to note about Miller's end of the world prediction is how even its utter failure inspired scores of Millerites to break off and create their own movement. Instead of recognizing the failure of Miller's prediction, many came up with alternative interpretations for what had happened on October 22, 1844. In what became known as the doctrine of Divine Investigative Judgement (which is still a fundamental component of Seventh-day Adventist theology to this day), Hiram Edson and a few others taught that the judgment of God's professed people began on October 22, 1844 when Christ entered the "Holy of Holies in the heavenly sanctuary." Using scripture to defend their position (see Daniel 7:9-10, 1 Peter 4:17 and Revelation 20:12), Edson & Co. were able to "vindicate the saints" before God.

In addition to this unique interpretation, others came up with the "shut door" doctrine, which juxtaposed the events of October 22, 1844 with Jesus' 10 Virgins parable. The "shut door" suggested that the sincere followers of Christ (those who truly waited for him as the brides waited for the bridegroom) would be accepted into the kingdom, while the foolish brides would be cast out. In other words, Christ had seen and recognized those who were waiting for him on the date predicted, and their efforts would not be in vain. In many ways, this interpretation would be repeated at a later date by another Miller break off (the Jehovah's Witnesses) who also had specific dates for Jesus' return to the earth. When he didn't appear in person, leaders were quick to make the assertion that Christ had "returned in spirit."

In conclusion, regardless of whether or not you believe in the Rapture today, a future date or not at all, American religion is likely to continue to employ the end-of-days doctrine that has become so very popular in our society today. And keep in mind this: Harold Camping may seem like just another geriatric nut-job but the movement he has created may lead to even bigger things.

Just look at what William Miller's prediction caused.
Posted by Brad Hart at 9:28 AM

Today's plan is to attend a local food festival and end up by 6PM local Rapture time at a local micro brewery that is strategically located within 100-200 yards of a Catholic, a Lutheran and a Baptist Church (Seventh Day Adventist & Methodist churches are a little further away). I'm taking binoculars and a notebook.

It's the scientist in me.

jimmyraybob,
You're a "stitch"!!!
Can I post this on my FB page? This is hilarious?

Sure. As was noted on a recent previous thread, it's all about sharing.

Great opening music and interesting piece. From the London Telegraph: "There were also unconfirmed reports that Tonga has, thus far, failed to boil into the Pacific. " Sorry, I'm not up on my html: http://www.telegraph.co.uk/news/religion/8527582/Apocalypse-not-right-now-Rapture-end-of-world-fails-to-materialise.html

The formula was simplistic. The notion (nailing the day) was presumptuous. The baggage (trinity and hellfire) was typical. And he sure did flummox a lot of followers. But he is 'keeping on the watch.' No one can say he's not doing that. As so many before him have done. As you pointed out.