The Huck Gets His History On (or Off) 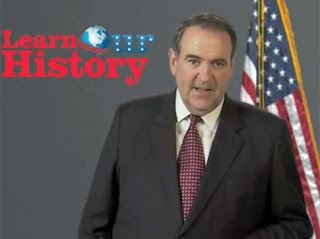 So Mike Huckabee isn't running for president in 2012 (hard to believe that candidates are ALREADY starting to jockey for position in the 2012 race when 2011 is still just getting started).

But that doesn't mean that he hasn't been making waves.

Over the past couple of months, Huckabee has been focusing his attention on history, "positive" American history to be exact. Huckabee's newest project, entitled "Learn Our History", attempts to present an "objective", pro-American interpretation of our nation's past, free from the smears and errors of current historical revisionists:

Many of our schools and teachers today haven't found ways to make history for kids fun. Instead, they’re teaching with political bias that distorts facts for the sake of political correctness. As a result, our national pride and patriotism are in jeopardy.

And on his Fox show:

Of course this isn't the first time Huckabee has been caught in a historical tug-o-war. It was only a couple months ago that Huckabee stated made the claim that all Americans needed to listen to pseudo-historian and Christian Nation Apologist David Barton at gunpoint if necessary. And during the 2008 presidential primaries, it was Huckabee who regurgitated the Barton myth that "The signers of the Declaration of Independence were brave people, most of whom, by the way, were clergymen." In addition, it was Huckabee who asserted his belief that the Constitution needed to be amended to fit the standards of God's holy word (the Bible).

And though I personally have no problem with Huckabee's desire to promote patriotism and a love for America's beautiful heritage, I do question his objectivity. After all, isn't it both necessary and appropriate for historians to point out the negative aspects of our past? This is where Huckabee is, in my opinion, in error. The perceived "attacks" on Huckabee's new project are not exclusively based on a hatred for America but rather on his clear bias. Maybe Huckabee's intentions are pure but it's hard to believe he is free from the "political bias" he laments. When his presentation praises all things Reagan, but never make mention of FDR in his WWII cartoon, one has to wonder how he came to such conclusions.

Of course this is all to be expected. Since when has a political pundit NOT used history to further his/her agenda? It's just further evidence that the culture warriors lack the true historical integrity needed to sustain any legitimate discussion on our nation's TRUE history.

I guess the old adage is true: political history isn't history; it's politics.
Posted by Brad Hart at 9:34 PM

So, who was this guy?

Agree whole heartedly that the good has to be presented with the bad. I know we differ a bit on the impact of Columbus on the Americas but this is a good example of making sure the good comes out with the bad.

Of course, in the case of Columbus and the Scholastics he was influenced by and influenced I think the distortion in the anti-American movement is not digging to find a lot of the good he did.

Though most of the horror stories were done by men he did not choose and when he was not there.

"Admiral of the Ocean Sea" is the best book written on him and a man named Eliot writes a good book on the history of Spain that sheds light on the impact that Aragon had on our world.

I know this is not "American Creation" in the sense of USA but does illustrate you well put point.

I didn't know that. That's some motherlode stuff, Joe!

While I think it's perfectly legitimate to critique Huckabee's (or anyone else's for that matter) views on history, isn't claiming that we can understand or impart "TRUE" history, problematic in it's own way?

It seems to me that many historians do their best to get at what really happened and obviously educating lay people about the importance of primary sources is vital to cutting through much historic "mythology." And I understand one historian feeling that he may have a better handle on the past than another. But in reality, very good professional historians do have differences of opinions and dispute all sorts of things, "facts" included.

Seeing that phrase "TRUE history" makes me wonder whose "TRUE history" are we talking about? I am all for getting as close to historic truth as we can but isn't claiming to to know or be able to get at the "TRUE history" fraught with a certain kind of hubris? I would say that through making effort we can get closer to it, but actually getting it whole, complete, and "TRUE". mmmmm......