A Salute to George Washington 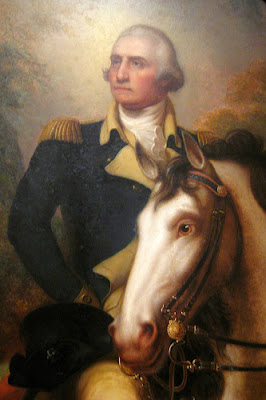 "I hope I shall possess firmness and virtue enough to maintain what I consider the most enviable of all titles, the character of an honest man." -George Washington

Today (February 21) is the day Americans set aside to honor the birth and legacy of George Washington. Though we've gotten in the unfortunate habit of calling the holiday "Presidents Day," its original and still legal purpose is to honor one President: George Washington. That Washington deserves his own holiday should be beyond dispute, as he was much more than simply a President. He was the father of the United States of America...and, in the words of King George III, the "greatest man" of his time.

Here at American Creation, we've argued over whether George Washington was a Christian, Deist, or somewhere in between. In American society overall, his name is used to advance political causes and to sell cars. But one thing all Americans and certainly everyone here should agree upon is that George Washington was a man of great character and integrity, and the United States of America was blessed to have him at the center of its birth.

Washington was not a perfect man. He was a slave owner after all. But he was a highly conscientious man, someone who aspired to live a moral and honorable life, even so much that he genuinely wrestled with the contradictions and tragedy of slavery, an institution he had no cultural reason to question, given his upbringing and the economic nature of plantation Virginia. His attitude was summed up in a letter to his friend Robert Morris, in which he wrote: "I can only say that there is not a man living who wishes more sincerely than I do to see a plan adopted for the abolition of [slavery]."

Though slavery is an understandable stain on Washington's legacy (which is why I address it above), it should not define the man or overshadow his many other noteworthy qualities and achievements. We are, after all, talking about a man who put his fortune, reputation, and life at risk to lead his nation through the American Revolution. We are talking about a man who resisted the temptation to power, sternly refusing to even consider dictatorial office at the conclusion of the Revolutionary War and who voluntarily resigned his commission once the issue of independence was decided. This act alone makes him worthy of every square inch of every monument and building erected to his name, for he is one of the very, very few revolutionaries in history to walk away from power vertically. And his actions established the principle in America of respect for democratic rule and civilian authority over the military. And we are talking about a man who conducted himself with wisdom, humility, and moral discipline while serving as our nation's first President.

I will not take the time to list out all of Washington's achievements, but suffice it to say that, when faced with challenges or opportunities, Washington's consistent moral compass was that he maintain a worthy reputation under the shadow of Divine Providence and in the eyes of his fellow countrymen. George Washington's sincerity, integrity, character, bravery, and charisma made him the truly indispensable man in American history. Without Washington, there likely would not be a United States of America today. I will let the nation's sixteenth President get the final say in summing up George Washington's legacy...

"Washington is the mightiest name of earth — long since mightiest in the cause of civil liberty; still mightiest in moral reformation. On that name, an eulogy is expected. It cannot be. To add brightness to the sun, or glory to the name of Washington, is alike impossible. Let none attempt it. In solemn awe pronounce the name, and in its naked deathless splendor, leave it shining on." -Abraham Lincoln

For more on George Washington's legacy, check out...

"What if George Washington Had Never Been Born?"
Posted by Brian Tubbs at 9:02 AM

Great summary. He is the greatest leader of his generation or any generation.

Excellent tribute to George Washington. I would only add the following, regarding slavery:

According to historian Gordon Wood, "By the time he returned to Mount Vernon at the end of the war, he had concluded that slavery needed to be abolished ... because it violated everything the Revolution was about." This may not surprise historians as much as the lay public since Washington had already displayed an open mindedness towards race in his having "led a racially integrated army composed of as many as five thousand African American soldiers."

Six months before his death, Washington in the writing of his will, laid provisions to free his three hundred slaves at the point of his wife's passing. In this action, Wood stressed "he did not just throw his slaves out into the world." Instead, Washington made clear that juvenile and elderly slaves ought to be provided for by means of literacy, and vocational training.

Wonderful post! Great job and thank you for your help!
Richard Lim
www.firstinpeace.com