The Founding Fathers as Mormons? 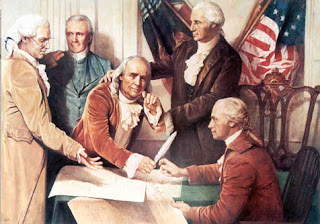 The Mormon Church has practiced vicarious baptism since the 1840s, when their founder and prophet, Joseph Smith, revealed the doctrine to the Mormon congregation. Since then, baptisms for the dead have continued to be conducted in Mormon temples. To support the practice of vicarious baptism, Mormons will usually point out a few biblical verses from the New Testament. The first of which is Paul speaking to the Corinthians. In 1 Corinthians 15:29, Paul is quoted as saying:

In addition, Jesus' advice to Nicodemus in John 3:5 has been used to support the practice of vicarious baptism. The scripture states:

Jesus answered, Verily, verily, I say unto thee, Except a man be born of water and of the Spirit, he cannot enter into the kingdom of God.

One important factor to remember about Mormon baptisms for the dead is that the baptism DOES NOT guarantee salvation. Instead, the deceased is given the opportunity -- in the afterlife -- to accept or reject the baptism that has been performed on their behalf. In other words, the PHYSICAL act of baptism, which is believed to be required of God for salvation, is performed on Earth, while the deceased is given the chance to accept the ordinance or reject it.

So what does all of this have to do with the Founding Fathers?

In 1877, President Wilford Woodruff -- the 4th President and Prophet of the Church of Jesus Christ of Latter-Day Saints -- related the following experience that allegedly took place while he was working in the St. George Temple:

Before I left St. George, the spirits of the [Founding Fathers] gathered around me, wanting to know why we did not redeem them. Said they, “You have had the use of the Endowment House for a number of years, and yet nothing has ever been done for us. We laid the foundation of the government you now enjoy, and we never apostatized from it, but we remained true to it and were faithful to God.” These were the signers of the Declaration of Independence, and they waited on me for two days and two nights...I straightway went into the baptismal font and called upon Brother McCallister to baptize me for the signers of the Declaration of Independence, and fifty other eminent men, making one hundred in all, including John Wesley, Columbus, and others. (Wilford Woodruff, The Journal of Discourses of Brigham Young, His Counselors, and the Twelve Apostles. Vol. 19, Pp. 229).

In addition to this account, President Woodruff recalled this experience before the 1898 April General Conference of the Church:

Those men who laid the foundation of this American government and signed the Declaration of Independence were the best spirits the God of heaven could find on the face of the earth. They were choice spirits, not wicked men. General Washington and all the men that labored for the purpose were inspired of the Lord...Everyone of those men that signed the Declaration of Independence, with General Washington, called upon me, as an Apostle of the Lord Jesus Christ, in the Temple at St. George, two consecutive nights, and demanded at my hands that I should go forth and attend to the ordinances of the House of God for them. (Conference Report of the Church of Jesus Christ of Latter-day Saints. April, 1898. Pp. 89-90).

In addition, President Ezra Taft Benson -- the Church's 13th President, who also served as the U.S. Secretary of Agriculture in the Eisenhower Administration -- had the following to say about Wilford Woodruff's experience:

The temple work for the fifty-six signers of the Declaration of Independence and other Founding Fathers has been done. All these appeared to Wilford Woodruff when he was president of the St. George Temple. President George Washington was ordained a high priest at that time. You will also be interested to know that, according to Wilford Woodruff's journal, John Wesley, Benjamin Franklin, and Christopher Columbus were also ordained high priests at that time. When one casts doubt about the character of these noble sons of God, I believe he or she will have to answer to the God of heaven for it. Yes, with Lincoln I say: "To add brightness to the sun or glory to the name of Washington is . . . impossible. Let none attempt it. In solemn awe pronounce the name and in its deathless splendor, leave it shining on."

So, not only were the founding fathers given a vicarious baptism, but George Washington, Benjamin Franklin and others were ordained to the highest office of the Mormon priesthood. An interesting and controversial prospect to say the least

What I find so very interesting about this entire story is that it demonstrates -- on the part of the Mormon Church -- a powerful devotion to the idea that the United States was founded by the hand of God. What is even more interesting is that this ideology was not a new concept, but it began in the latter part of the 1800s, while tensions between the Mormon Church and the United States government remained hostile. This idea of American providentialism has continued to the present day for the majority of Mormons. In fact, I found it surprising that Brigham Young University has the largest ROTC program in the country. Obviously relations beteen the Mormon Church and the U.S. government have changed over the past few decades.
Posted by Brad Hart at 3:24 PM

I find the Mormons'"vicarious baptism" quite beautiful, actually. I suppose Hitler is/was already baptized. Stalin, too.

You just put your religion out here, Brad, Mormonism. That was your choice, and I think it's kind of cool. As you know after all these years together on our blog, Brad, I will defend your right to your religious beliefs. Apparently, you've decided to go for it.

The odd and disappointing thing is that our usual dissenters will likely let the crickets chirp on this and this is likely the only response you'll get.

So, for the record, Brad---at arm's length from the actual theology---I think Mormonism's "vicarious baptism" is quite beautiful.