The Tea Party and the Constitution 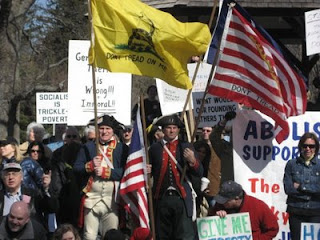 Dr. John Fea, historian, author and long-time friend of American Creation, has posted an interesting article on the Tea Party movement. The article is written by Joseph Moore, a graduate student in American history at UNC-Greensboro. Mr. Moore writes:

The paradox of this crusader's zeal for the Founding Fathers is that the Tea Party more closely resembles the groups that opposed the Constitution than those who wrote it in 1787. The world was different then, but not so different.

Our Constitution was a reaction to a great recession. America couldn't even pay the interest on the national debt taken out to finance the Revolution. Cheap imported goods flooded the market, diving American workers out of a living. These patriotic people, many of them war veterans, had financed their homes with loans. With no one buying American anymore, regular people couldn't pay their mortgages, and banks foreclosed on homes across the nation.

In Massachusetts, a war veteran named Daniel Shays espoused something like the modern sentiment, 'we're mad as hell and we're not going to take it anymore.' Shays and other farmers took up arms, took to the streets, and became the faces of a movement sweeping the country. In the spirit of American patriotism, they demanded that state lawmakers pass legislation protecting hardworking people against bankers and taxes. Thomas Jefferson noted approvingly, "A little rebellion now and then is a good thing."

Thomas Jefferson was in Paris when he said that. George Washington, James Madison and Alexander Hamilton were not. Those Founding Fathers called for a new government to stave off groups like Shays'. The document they created, the Constitution, put distance between the people and their government. Politicians, not the people, chose Senators. Not one private citizen voted for George Washington to be president. The original Constitution did not include the rights to free speech, religious choice, bearing arms, due process, or trial by jury. "We the People of the United States" was added in the final day of editing- to save space.

Enter the Anti-Federalists. They were panicked that the new government would enable "the rich to oppress and ruin the poor." This annoyed Washington, who privately remarked that the protesters gave "the tone" of being "obnoxious," and that it was best that citizens should not have opportunity to "peak behind the curtain" of US government.

What frustrated our first President were the Anti-Federalists; emotional appeal and their conspiracy theories about strong central government colluding to take away people's freedoms. "This government, " one opponent prophesied, "will set out a moderate aristocracy."

The Anti-Federalists lost, mostly because in the midst of economic crisis a strong national government made the best sense. Along the way the Anti-Federalists browbeat ten notable concessions called the Bill of Rights out of Washington and 'the establishment.' We woe them our thanks. But that cannot change irrefutable historical facts:

Ironically, the Tea Partiers have embodied what their most sacred text opposed. This does not delegitimize them.They stand in a meaningful tradition even as they misunderstand it. They have channeled the old angst of Anti-Federalism, good and bad, into the present by combining Jeffersonian fear of government with anger for anger's sake. Their zeal is both tremendous and historic.

Perhaps the ultimate irony is that the political moderation the Tea Party hates and the Founding Fathers loved is now represented not by politicians, but by comedians. One week before the mid-term elections, Comedy Central's Jon Stewart will hold his "Rally To Restore Sanity" on the National Mall. The restoration of sanity was what the Constitution was originally about.

And though I am not a fan or an apologist of the Tea Party movement, I believe that Mr. Moore's summation is a bit too superficial.

I think he makes so good points but down plays the fact that the Anti Federalists helped shape the Constitution. The Bill of Rights is no small part.

I couldn't agree more, King. I also think he jumps the gun when he states that the Constitution was created as a reaction to a recession. There were many additional factors that played into the creation of the Constitution. I do like how he mentions the fact that many founders found the protests of the "rabble" class appalling. As "gentleman" of an old and dying social order the thought of average chums raising hell wasn't always that pleasant...especially in light of what they were seeing take place in France..."off with his head...off with his head!"

It is difficult to compare the Tea Party to Shay's Rebellion. The Tea Party is very peaceful. They are not wanting to spill the blood of bankers. They are not agitating against foreclosures. And they clean up after themselves.

Washington didn't think much of armed rebellion against his country. I'm not sure that means he would disapprove of large peaceful protests. He probably wouldn't like their view of the role of government, but I think we can safely say that about every significant political party or movement of our time.

Moore doesn't go far enough. It's more like Paradise Lost, and the Tea Party is like Satan and his bad angels revolting against God.

I'll be happy when the election's over and these idiot comparisons of the Tea Party to various historical villains end.

I'd have to agree with Tom's comment, while both Anti- and Federalists were on different sides of the spectrum, the goal of the Constitution was to create a stable government. Despite the talk of "the People", we have to realise that was a certain segment of the population that was afraid of "peasant revolts". To these people, Democracy had the same meaning as anarchy.

I think the use of terms such as "the People" were being used in the same way that Wat Tyler's Peasants' Revolt was mollified by the King. The Constitution is quite clear that armed rebellion is treason and that the Declaration of Independence has no legal value.

While "peaceful" (they haven't shot anyone--yet), the tea party seeks to dismantle the government and put something else in its place.

So, ultimately, the Constitution is to provide a framework for an orderly running of the country. Part of that ordered system of government is that popular movements are thwarted by institutions such as the electoral college. Checks and Balances mean that a tea party victory will result in a shut down of government that will make 1995 seem like a small inconvenience.

Does that make sense?

Mr. Moore's summation is indeed superficial.
The Charles Beard thesis of economic determinism was exploded decades ago.
And a full reading of the idea's of the Federalist's and anti-Federalist's will reveal that they both wanted to secure the American Revolution, but differed on the methods.