The Levellers: A Forgotten or Distorted History? Part III 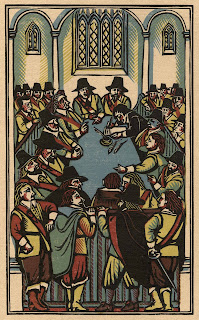 In part III of my series on the history of The Levellers I would like to shift my focus a bit. As has been pointed out in the comments sections of my previous posts on this subject, many of you feel that the Levellers are a product of a general trend towards popular rights in both England and Europe. And while I agree that the Levellers are hardly the exclusive guardians and protectors of this trend towards the rights of the masses, I do believe that they should be credited for their intense drive -- a drive that was arguably more passionate than any other organization at the time -- to bring about social change.

In the wake of the New Model Army's victory over King Charles I in 1647, Oliver Cromwell and other senior officers of the army -- known as Grandees -- attempted to negotiate new terms with the crown, which they hoped would secure additional rights for the common man. However, during the course of these negotiations, Cromwell and his fellow officers backtracked on their demands and acquiesced to the king's desire to maintain a powerful monarchy and House of Lords. For the more radical segment of the New Model Army -- which consisted primarily of Levellers -- these compromises were completely unacceptable. As a result, members of the Grandees -- led by Cromwell himself -- agreed to meet with Levellers and other radical apologists within the army, who were anxious to see that their demands be met.

Hence, the Putnam debates were born! Later in the Fall of 1647, these two opposing sides came together in Putnam to debate their proposals. For historians, these debates are a literal treasure trove of primary documents that reveal the intense political and ideological struggle that gripped 17th century England. Virtually all of the early proceedings were recorded verbatim, allowing historians of all generations the chance to examine how these debates played out. For the most part, the debates center around the general premises found in the Agreement of the People, a document drafted by key members of the Leveller movement that outlined the precise demands being made by the radical members of the New Model Army (I discussed the general history of Agreement of the People in a former post that can be found here). In fact, the Putney Debates began with a reading of Agreement of the People and then a detailed discussion on each of it's primary points followed.

The Putney Debates played host to two primary topics: representation of the masses and freedom of religion -- or perhaps better put, freedom from religion. As Professor William Whyte of St. John's College in Oxford states:

In the run up to the Civil War, the role of religion in national life was hotly contested. For most people, England was a Protestant place. But what Protestantism meant in practice was far from clear. For Charles I and for Archbishop Laud, the ideal was a centralized, hierarchical Church: led by its bishops, who were the King’s servants. Church buildings should be stately and gracious and worship should be orderly and measured. For their opponents – the people we know as Puritans – all this smacked of corruption. Their ideal was simplicity and authenticity. Church buildings were unimportant; ritual and religious images were dangerous – even idolatrous; bishops had no place in a believers’ church.

The struggle between these different religious ideals was political as well as theological. It was political because the Church was political: its bishops were appointed by the king and sat in parliament; the Church was responsible to the State. It was political because people understood politics in religious terms. At the Putney Debates themselves, the problems faced by the New Model Army were attributed to God’s anger. And it was political because the religious reforms envisaged by both Charles and his Puritan opponents had a political dimension. For Charles and for Laud, the orderly, hierarchical Church was intended to underpin an orderly, hierarchical society. For the Puritans, by contrast, the simple, honest, authentic Church was intended to transform the country into a nation of Bible-reading Christians; people who would abandon ‘Pagan’ festivals like Christmas, ‘Pagan’ activities like sport, and ‘Pagan’ habits like drinking too much.

Whilst Charles and many of his Puritan opponents wanted to enforce their vision of religion on all people, at the Putney Debates another vision of religious life was proclaimed. Almost all those present were Puritans – but they were what were known as ‘Independents’. They believed in freedom of conscience and in freedom of worship. No one, they affirmed, should be compelled to attend church or forced to conform to another person’s beliefs.

This was not the first time that such a principle was articulated. Nor did everyone accept its implications. But some these ideas were carried out under Cromwell and still others were embodied in the Toleration Act of 1689. Religion remained hotly contested, but increasingly – in England at any rate – people no longer died to preserve their freedom of conscience.

It is from this understanding of religion that the Levellers pushed for additional rights. As Colonel Thomas Rainsborough stated on day two of the debates:

We do not empower or entrust our Representatives to continue in force, or to make any Laws, Oaths, Covenants, whereby to compell by penalties or otherwise any person in any thing in or about matters of faith or to exercise of Religion according to his conscience, nothing having caused more distractions and heart burnings in all ages, that persecution and molestation for matters of Conscience in and about religion.

Rainborough continued his rhetoric regarding the freedom of the individual to choose by shifting his focus to the political arena:

I desired that those that had engaged in it might be included. For really I think that the poorest he that is in England has a life to live as the greatest he; and therefore truly, sir, I think it's clear that every man that is to live under a government ought first by his own consent to put himself under that government; and I do think that the poorest man in England is not at all bound in a strict sense to that government that he has not had a voice to put himself under. And I am confident that when I have heard the reasons against it, something will be said to answer those reasons — insomuch that I should doubt whether he was an Englishman or no that should doubt of these things.

And though these ideas did not have their genesis in the Leveller movement -- one could trace these ideas back quite a ways -- it is clear that the Putney Debates carried trmendous political and social clout. Now, it is worth pointing out that Cromwell, despite hearing the various arguments presented at the Putney Debates, chose to present an entirely different set of proposals to the King. As a result, the Leveller demands were never proposed or discussed outside of Putney. However, this should not be taken as proof positive that the Leveller movement was but a simple failure that eventually faded away with the passage of time. The Corkbrush Field mutiny in the latter part of 1647 illustrated -- at least for Cromwell and many of his followers -- that the ideas of freedom, equality, etc. were not likely to die out with the extermination of the Leveller movement. Instead, an unstoppable titlewave of change was underway.
***As I stated before, the Putney Debates are a treasure trove of valuable primary source material that is both interesting and enlightening. I hope the readers and contributors of this blog will take the time -- at least at some point -- to thumb through these documents. They are excellent sources that fit nicely with this blog's theme.***

Actually, the Putney Debates were not reported publicly at the time, and the record of those discussions was not published until 1890. The documents those soldiers had come to discuss were superseded by others written by Cromwell in the crisis atmosphere that followed the flight of Charles I.

Thus, while the Putney Debates are a very interesting slice of English constitutional thinking (from one segment of society) in 1647, their influence was probably minimal.

You are right about some of the writings being found and published in 1890 but my understanding was that the initial (like first 3 days) of the debates were published.

From Michael Mendle, author of The Putney Debates of 1647 states:

"The debates began on 28 October 1647. For three days, the proceedings were transcribed verbatim by the secretary William Clarke and a team of stenographers. From 2 November, however, all recording ceased. The debates were not reported and Clarke's minutes were not published at the time. They were lost until 1890 when they were rediscovered at the library of Worcester College, Oxford, by the historian C.H. Firth and subsequently published as part of the Clarke Papers."

And while Cromwell did eventually ignore the Levellers' petitions during the Putney Debates, I am still undecided as to whether or not their influence went unnoticed. Seems to me that the Corkbrush Field Mutiny suggests that these ideas were growing everywhere.

But I must admit that I am still quite undecided on the Levellers at this point. They are extremely interesting and I hope to do more research. Maybe at some point I'll make up my mind.

Mendle’s introduction to The Putney Debates of 1647 discusses public reporting on the first page. The initial remarks were brief, general, and, in his words, “coy”—no specifics about the participants or principles involved. And then they stopped altogether. He concludes, “It was, all in all, close to a news blackout.”

The Levellers did manage to get out a pamphlet version of An Agreement of the People, so that might have had some wider influence on England’s political debate at the time.

Thanks, Mr. Bell. I'm anxious to find some sources on how the Levellers impacted/didn't impact England after 1647. Mendle's book does offer a few good footnotes and sources. Now it's just a matter of tracking them down.

I think you are probably right about the transcripts of the Putney Debates not being accessible to the public. From what I have read it sounds like it was all but extinct. However, I still tend to think that their movement had a legitimate and palpable impact on English society. The Corkbrush Field Mutiny seems evidence enough of this fact.

This is an interesting series, Brad. I'll have to check in a little more regularly. I hope you will keep up on the Levelers being that it is a unique topic, and finding unique topics is hard to do when a blog like this has over 700 posts and been around for almost 2 years.