The Levellers: A Forgotten or Distorted History? Part I 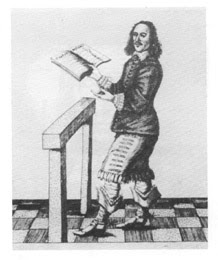 If there is a historical tale begging to be made into a blockbuster Hollywood movie it is the story of John Lilburne and "The Levellers." Just try to picture it: you take the likes of a Russell Crow type, caught up in an epic love story with a woman almost 30 years his junior, throw them into the convoluted world of 17th century England with a script chalked full of tales of political oppression, heroic resistance, civil war and an early and tragic death and what do you have? A surefire Oscar come February!

Yes, the story of John Lilburne is desperately needing to be told. But since Steven Spielberg, Ron Howard, etc. are unlikely to read this fair blog and alas, will not learn of their next big blockbuster, I will try to pick up the pieces and do what I can to shed light on the conflicting histories surrounding this somewhat obscure portion of British history.

Part I: John Lilburne, The Levellers, and the Fight for Equality

Born in the early years of the 17th century, John Lilburne was destined to crash head on with the political and religious oppression that was plaguing England. A devout Puritan, Lilburne grew to dislike the hierarchy of not only the Anglican Church but the English crown. As a result of his disdain for authority, Lilburne was introduced to a fellow agitator named John Bastwick, a Puritan activist who actively attacked the bishops of the Anglican Church. A sample from Bastwick's A Letany:

Howsoever they [Anglican Bishops] glory in the name of the church and stile themselves with that dignity, excluding all others from that title...they are so far from being the Church as they are not so much as rubbish of that glorious fabricke: for they persecute, destroy and ruine that true Church of Christ and afflict and weary his members continually: and for that end they have their sworne servants through the kingdome to give them information, against both Minister and people that are of a more godly and strict life, and that desire in the purity of his Ordinance to serve ye Lord.

Long story short, Lilburne came to fully embrace Bastwick's passionate assault on Anglican Bishops. In consequence, Lilburne took to regularly smuggling anti-Anglican literature from Holland; a practice that eventually landed Lilburne in jail. It was during his trial that Lilburne demanded certain "freeman" rights, which he believed had been withheld from all English citizens. As a result, Lilburne was allegedly flogged, beaten, gagged and drug from a horse. The events surrounding Lilburne's trial and beating became well-known throughout England, which eventually led to Lilburn receiving the nickname, "Freeman John."

A few years after his release, Lilburne joined up with the likes of Oliver Cromwell and the Robert Devereux. However, Lillburne soon grew impatient with the new Cromwell Administration, believing that he had failed to make the reforms necessary for a free people. Together with other reformers, Lilburne embraced the "Levellers" movement, which set out to bring about constitutional changes that would list specific rights guaranteed to the people. In their manifesto, The Agreement of the People (1647) the Levellers petitioned for:

An Agreement of the People for a firm and present peace...upon grounds of common right.

In addition, the Agreement of the People lists several key rights, all of which are to be guaranteed by law, and which many historians argue served as precursors to the American Bill of Rights that followed:

That the power of this, and all future Representatives of this Nation, is inferior only to theirs who choose them, and doth extend, without the consent or concurrence of any other person or persons, to the enacting, altering, and repealing of laws, to the erecting and abolishing of offices and courts, to the appointing, removing, and calling to account magistrates and officers of all degrees, to the making war and peace, to the treating with foreign States, and, generally, to whatsoever is not expressly or impliedly reserved by the represented to themselves: Which are as followeth.

1. That matters of religion and the ways of God's worship are not at all entrusted by us to any human power, because therein we cannot remit or exceed a tittle of what our consciences dictate to be the mind of God without wilful sin: nevertheless the public way of instructing the nation (so it be not compulsive) is referred to their discretion.

2. That the matter of impresting and constraining any of us to serve in the wars is against our freedom; and therefore we do not allow it in our Representatives; the rather, because money (the sinews of war), being always at their disposal, they can never want numbers of men apt enough to engage in any just cause.

3. That after the dissolution of this present Parliament, no person be at any time questioned for anything said or done in reference to the late public differences, otherwise than in execution of the judgments of the present Representatives or House of Commons.

4. That in all laws made or to be made every person may be bound alike, and that no tenure, estate, charter, degree, birth, or place do confer any exemption from the ordinary course of legal proceedings whereunto others are subjected.

5. That as the laws ought to be equal, so they must be good, and not evidently destructive to the safety and well-being of the people.

These things we declare to be our native rights, and therefore are agreed and resolved to maintain them with our utmost possibilities against all opposition whatsoever; being compelled thereunto not only by the examples of our ancestors, whose blood was often spent in vain for the recovery of their freedoms, Buffering themselves through fraudulent accommodations to be still deluded of the fruit of their victories, but also by our own woeful experience, who, having long expected and dearly earned the establishment of these certain rules of government, are yet made to depend for the settlement of our peace and freedom upon him that intended our bondage and brought a cruel war upon us.

In addition to Agreement of the People Leveller supporters like Lilburne and Richard Overton authored countless letters and pamphlets of petition against the Cromwell government, which they saw as being every bit the oppressor as the crown. As Lilburne states in a Sept. 11, 1648 petition:

Insomuch as we who upon these grounds have laid out ourselves every way to the uttermost of our abilities — and all others throughout the land, soldiers and others who have done the like in defence of our supreme authority and in opposition to the king — cannot but deem ourselves in the most dangerous condition of all others: left without all plea of indemnity for what we have done, as already many have found by the loss of their lives and liberties either for things done or said against the king, the law of the land frequently taking place and precedency against and before your authority, which we esteemed supreme, and against which no law ought to be pleaded. Nor can we possibly conceive how any that in any ways assisted you can be exempt from the guilt of murders and robbers by the present laws in force if you persist to disclaim the supreme authority, though their own consciences do acquit them as having opposed none but manifest tyrants, oppressors and their adherents.

For many historians, the story of John Lilburne and the Levellers is a clear-cut stepping stone that later inspired the likes of John Locke, Thomas Hobbes and -- perhaps indirectly -- the Founding Fathers. The petitions of the Levellers, specifically the Agreement of the People are often seen as vital precursors to later documents such as the Declaration of Rights and the Bill of Rights. For these historians, the legacy of the Levellers is a treasure that has unfortunately been obscured over time.

But is the story behind the Levellers that of an unknown, obscure and forgotten legacy of heroism that foreshadowed the later events of the American Revolution? Or is the Leveller saga, like so many "historical" Hollywood films, more the stuff of smoke and mirrors than actual substance? In part II of my series on the Levellers (which will be posted tomorrow) I will present some of the contrary arguments that attempt to uncover the true agenda behind the history of the Levellers.
Posted by Brad Hart at 2:33 PM

The Levellers have crossed my radar in our joint studies, and have always been something I wanted to get back to.

Thanks, Tom. I think the Levellers are a topic worthy of much more attention here on this blog. I hope to do several posts on the subject in the coming weeks.

For many historians, the story of John Lilburne and the Levellers is a clear-cut stepping stone that later inspired the likes of John Locke, Thomas Hobbes and -- perhaps indirectly -- the Founding Fathers.

It may be a stepping-stone, but the path's not so obvious. Hobbes agreed to some "egalitarianism" as a starting point, but he certainly believed that the state required a sovereign--not necessarily hereditary aristocracy or monarchy-- but strong central authority at least; the citizens' covenants were best protected by that strong central authority, according to Hobbes.

The Levellers seem closer to Locke's thinking, perhaps, but Locke had no problem justifying inequality, and a sliding scale of justice--like the "right" of WASPs to seize the property and territory of natives.

Lilburne and his faction may deserve some respect for objecting to Cromwell's rule by force (the proverbial "meet the new boss, same as the old boss" meme).

I think you'll probably like the second installment that I am doing on the Levellers. A lot of historians agree with you with regards to the Levellers' influence on Locke, Hobbes, etc. I will discuss this in my next post.

With that said, I still believe that the Levellers' influence extended to more than just being a thorn in Cromwell's side. They clearly had an impact in terms of bringing about general rights.

How much of an impact? Well, that's the question I'd like to have answered.

the property and territory of natives

Which property the natives had seized from other natives.