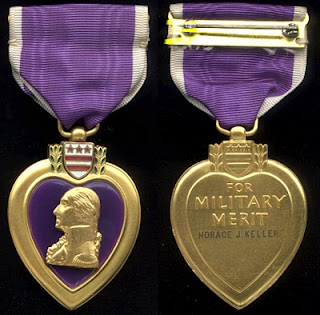 I know that this blog is primarily devoted to religion and the founding of America but this was too interesting to pass up. On this day, the PURPLE HEART, a medal given to soldiers who are wounded in combat, was created. And do you know WHO created the Purple Heart? None other than George Washington himself! Here's an interesting little tidbit from History.com:

At his headquarters in Newburgh, New York, General George Washington, the commander in chief of the Continental Army, creates the "Badge for Military Merit," a decoration consisting of a purple, heart-shaped piece of silk, edged with a narrow binding of silver, with the word Merit stitched across the face in silver. The badge was to be presented to soldiers for "any singularly meritorious action" and permitted its wearer to pass guards and sentinels without challenge. The honoree's name and regiment were also to be inscribed in a "Book of Merit."

Washington's "Purple Heart" was awarded to only three known soldiers during the Revolutionary War: Elijah Churchill, William Brown, and Daniel Bissell, Jr. The "Book of Merit" was lost, and the decoration was largely forgotten until 1927, when General Charles P. Summerall, the U.S. Army chief of staff, sent an unsuccessful draft bill to Congress to "revive the Badge of Military Merit." In 1931, Summerall's successor, General Douglas MacArthur, took up the cause, hoping to reinstate the medal in time for the bicentennial of George Washington's birth. On February 22, 1932, Washington's 200th birthday, the U.S. War Department announced the creation of the "Order of the Purple Heart."

In addition to aspects of Washington's original design, the new Purple Heart also displays a bust of Washington and his coat of arms. The Order of the Purple Heart, the oldest American military decoration for military merit, is awarded to members of the U.S. armed forces who have been killed or wounded in action against an enemy. It is also awarded to soldiers who have suffered maltreatment as prisoners of war.