Poll Results: Which Event Had the Greatest Influence on the Revolution?

The results of American Creation's second poll are in, and it went all way down to the wire. After 112 votes cast on the question, "Which event had the greatest influence on the revolution" the winner is... 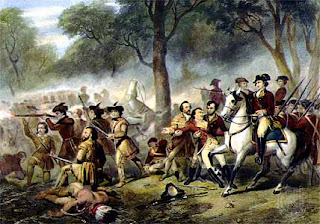 As I mentioned above, this one went all the way down to the wire. The French and Indian War finished in first place with 38 votes (34%), just barely enough to put it over its closest competition, which was the Stamp Act (finished with 37 votes). The Boston Tea Party ended in third place with 15 votes (14%) while the Declaratory Act came in 4th with 11 votes and the Boston Massacre ended in last with 10 votes.

Again, thank you to all who participated in this extremely "scientific" poll. Please check out and participate in our newest poll as well!
Posted by Lindsey Shuman at 10:06 AM

Well, even though I voted for the French & Indian War I completely understand how and why the Stamp Act came so close to winning. In reality, both events were of paramount importance to the eventual outbreak of revolution. My reason for selecting the war was because it really set the stage for all of Britain's "oppressive" measures that followed, INCLUDING the Stamp Act.

The way the votes trickled in was very...irregular.

Are you claiming voter fraud, Tom? Perhaps Acorn has been infiltrating our blog??? Or the Iranian government???

In my opinion, Tom is correct to be suspicious. However, in this instance, I don't find the results are not entirely out of line with expectations.

We might test the internet polling process by creating a pole that is more polarizing. Perhaps ...

"America was founded on the religious principles of (a) Orthodox Christianity, (b) theistic rationalism, (c) Unitarianism, (d) Diesm, (e) a variety of religions, (f) agnoticsm / secularism / (not religous) (g) atheism."

If such were to be done, I think the results would reveal how unreliable the polling process is. However, I also think it would increase the readership of the blog.

What, are you trying to get on my last nerve after that recent charade, Ben? I let you off way easy, man---'twas I who bore the slings & arrows. Outrageous fortune indeed.

But since I'm a gentleman of good cheer and grudges are alien to me, it is funny to see "theistic rationalism" in there, and the brutal job Wiki does of explaining it.

I'll say no more here as we're going to give Gregg and his thesis a little time off around here on humanitarian grounds. But noted for future use.

And thx for agreeing that the last poll results as they trickled in looked a little funny in their fits and starts.

And I'll agree that there's nothing like a poll, especially a badly-constructed one, to increase interest and further cloud the issues. People prefer their prejudices.

I'm sure management is already writing up your suggestion, no changes necessary or desirable.

No Tom, you're just being paranoid.

Only Tom would suspect something as stupid as voter fraud. Give me a break, dude! If you are being serious than you desperately need a life!