The "Christian Nation" is Getting Desperate 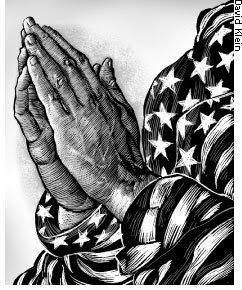 and their nonsense is
reaching a crescendo

This past week, Mike Huckabee, David Barton, Lou Engle, Oliver North, and others joined Newt Gingrich's Rediscovering God in America movement in Virginia Beach. The result: a convoluted, disorganized and messy presentation to a mass of desperate people who are attempting to cling to whatever fragment of "Christian Nation" nonsense they can find. And make no mistake about it, their message is getting old, watered down, boring and predictable. Here are just a few examples:

Mike Huckabee:
"The notion that we are just one of many among equals is nonsense. The United States is a blessed nation and our victory over the British empire was a miracle from God's hand."

—We are in a period when we are surrounded by paganism. And paganism is on offence and that's why our first great challenge is spiritual.

—Reach out to everybody in the country who is not yet saved and...help them understand the spiritual basis of a creator-endowed society.

—The beginning of wisdom and virtue is a recognition of our subordination to God, and to the fact that a life without God is a life so empty that even drugs and alcohol and other things cannot fill it.

—This is a country in hunger for another Great Awakening, a wave of belief which has again and again swept this country and fundamentally changed us.

And here is Newt Gingrich at the John Locke Foundation (am I the only one who finds irony in that):


And here is Lou Engle "blessing" Newt Gingrich (one can only wonder if he would do the same for Hillary Clinton, etc.):


Dr. John Fea had some very interesting things to say on this event over at his blog. Here are a few highlights:

Huckabee: "The notion that we are just one of many among equals is nonsense," Huckabee said. The United States is a "blessed" nation, he said, calling American revolutionaries' defeat of the British empire "a miracle from God's hand." (This is a quote from the Pilot reporter). This is the kind of providential history that worries me. Huckabee is echoing the earliest New England settlers who believed that the Massachusetts Bay Colony was God's chosen people--a new Israel. As Nicholas Guyott has shown in his study of "Providence" in early American history, the notion that America is doing the will of God in the world has gotten us into trouble before. Was the American victory over the British a miracle? It seems to me that we can be more certain in explaining the American victory over Britain in ways other than proclaiming it as some kind of supernatural intervention that defied the laws of nature.

Gingrich: I am not a citizen of the world, I am a citizen of the United States because only in the United States does citizenship start with our creator." First, by claiming that he is not a "citizen of the world" (a clear swipe at Obama's recent speech in Cairo) Gingrich violates his newfound Catholic faith. Catholic social teaching, at least the version put forth by Vincent Rougeau in his recent Christians in the American Empire, suggests that all human beings have solidarity with all other humans based upon the fact that they are created beings who share a common humanity. Catholic solidarity implies, in part, that one's loyalty should be primarily to the entire human race and not a particular nation-state. Rougeau argues that Christian belief in the solidarity of all human beings means that national favoritism is "difficult to justify on moral terms." The nation-state is not divinely ordained. Loyalty to the state should be based on whether or not the state is promoting human dignity and the common good. Moreover, what does Gingrich mean by the idea that "citizenship" starts with "our creator?" The last I checked I do not think that American citizenship requires belief in a creator God.

Gingrich may have found religion, but he has yet to come to grips with the ways his newfound Catholic faith might force him to change his Republican/Religious Right talking points. During the 2008 campaign, Huckabee seemed to show promise, through his populist message, of articulating a Christian-informed politics. But he never did quite separate himself from the error-laden "God and Country" approach to the American past that has become a staple of the Religious Right.

Posted by Lindsey Shuman at 9:18 AM

Did they say "Christian?" Seems more like God-talk along the lines of the Founders.

"Miracle from God's hand" is a bit strong. George Washington in his inaugural, however, did express the same sentiment, albeit more gently:

"In tendering this homage to the Great Author of every public and private good, I assure myself that it expresses your sentiments not less than my own, nor those of my fellow-citizens at large less than either. No people can be bound to acknowledge and adore the Invisible Hand which conducts the affairs of men more than those of the United States. Every step by which they have advanced to the character of an independent nation seems to have been distinguished by some token of providential agency..."

For as Jefferson wrote:

"And can the liberties of a nation be thought secure when we have removed their only firm basis, a conviction in the minds of the people that these liberties are of the gift of God?"

The United States of America is indeed, um, exceptional in grounding rights and liberty in this way.

Again, the real irony is that expressing these sentiments in 2009 brings about such a tizzy, where they were unremarkable at the Founding.

That said, I think this is bad politics, and I wouldn't vote for Huckabee, as his Holy Rollerism goes past the statesmanship required for the presidency.
__________

Oh, these culture wars kill me, especially with the partisan overgloss.

What's the "nonsense" part, Lindsey? What bothers you the most?

The fact that many Christians are calling for another "Great Awakening"? Is that "nonsense"? Does that bother you? If so, why?

Do Christians not have the right to organize, lobby, advocate, etc. on public policy matters like abortion, same-sex marriage, etc? Do they not have as much right to do this as any other interest group? Is it "nonsense" when they do?

That term is usually associated with Christians (often in the so-called charismatic or Pentecostal community) that rely on emotional or "supernatural" experiences to guide their faith and worship. That is definitely NOT Huckabee.

I know, because he and I are of the same denomination.

Ah, thx for the correction, Brian. I'm not as up on my Protestant lingo as I should be.

I was referring to this speech

I find it unacceptable to mix pastorship and a political candidacy in this way.

Huckabee's quite reminiscent of Samuel Adams, though, wouldn't you say?

Yeah, I've got no problem with Huckabee preaching. And I actually have no problem with the content of his sermons. But I do see your point that a presidential candidate needs to be sensitive in terms of his or her focus.

For my own part, if I ever felt I should run for political office, I would step out of the pulpit and focus on that.

Exactly, Brian, and that was my objection. To combine the two pulpits is to a clear violation of the principle of separating church and state, which although overextended and misinterpreted as separating religion and public life, certainly applies here.

And as a thought experiment, take Huckabee's "When we become believers, it's as if we have signed up to be part of God's Army, to be soldiers for Christ" and substitute a mullah and "Allah's Army."

No thanks. Huckabee lost my vote right there, and likely forever, unless say, Rev. Jeremiah Wright is his opponent.

Huckabee: "When we become believers, it's as if we have signed up to be part of God's Army, to be soldiers for Christ"

That's a completely appropriate comment to make from the pulpit, since the Bible indeed calls people to be followers of Christ.

And Paul talks about the armor of God.

I see your point. When a presidential candidate says that during a campaign, it conjures up "holy war" imagery. Not good.

I will say, though, that some preachers in the past have pulled off the balance - albeit before the TV and Internet.