Land of Confusion: Will We Ever Sort it all Out?

Here at American Creation, one of the repeating arguments that we tackle almost on a weekly basis centers around the issue of how much "God talk" did the founding fathers want in American society and government. Did the founders hope for a plethora of religious discussion to take place in the halls of government? Or were they hoping to create a secular government based on human reason and intellect that would be free from the "shackles" of religious tyranny?

Of course our blog is not the first or only forum in which these discussions take place. A countless number of books, blogs, television outlets, etc. have immersed themselves in this "custody battle" for the religious -- or anti-religious -- heritage of America's founding. I believe author Steven Waldman effectively illustrates this ongoing "war" for America's founding heritage when he writes:

The "religious" side wants less separation of church and state, and the "secularists" want more...For starters, many conservatives believe that if they can show that the Founding Fathers were very religious, they thereby also prove that the Founders abhorred separation of church and state...Some liberals, meanwhile, feel the need to prove the Founders were irreligious or secular and therefore, of course, in favor of separation...But in the heat of this custody battle over the spiritual lives of the Founding Fathers, BOTH SIDES DISTORT HISTORY...In fact, the culture wars have so warped our sense of history that we typically have a very limited understanding of how we came to have religious liberty. (Founding Faith, 7).

And this is the central problem. in the heat of this "custody battle" both the Christian nation supporters and the American secularists have lost their way in the labyrinth of popular culture.

Attempting to grasp the historical facts of America's founding heritage is a messy prospect regardless of one's persuasion. Even the very participants in America's revolution understood this. As John Adams stated to his Virginia comrade, Thomas Jefferson:

Who shall write the history of the American Revolution? Who can write it? Who will ever be able to write it?

Nobody...except merely its external facts...The life and soul of its history must be forever unknown.

So can we ever actually hope to ascertain America's true religious heritage? At least one man believes so. And not only does he vehemently support the "Christian Nation" agenda but he also makes the boogeyman cower in fear. Yes, I am talking about the one and only Chuck Norris! 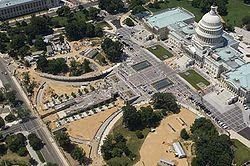 As a contributor to WorldNetDaily, Norris has written several pieces on America's Godly heritage. In October of this year, however, Norris aimed his attacks at the new $621 million dollar Capitol Visitor Center, which Norris believes is nothing more than a tribute to American political correctness. Norris writes:

Religious revisionism is popping up again in the new Capitol Visitor Center...Absent is anything that discusses our Christian or religious heritage. That is why Rep. Randy Forbes, R-Va., and the 108 congressional members of the Congressional Prayer Caucus recently petitioned the Architect of the Capitol by letter, which details and documents the incomplete and inaccurate religious content in the Capitol Visitor Center.

Norris then lists the specific religious components that are missing from the Visitor Center:

1. No mention of our national motto, "In God We Trust"

2. In displaying images of the current speaker's rostrum in the House chamber, the phrase "In God We Trust" is omitted from its location engraved in marble above the speaker's head;

4. There are factual inaccuracies regarding church services held at the Capitol in early decades of our republic, saying they were held when Congress wasn't in session, when in fact they were held year around – and even the so-labeled strict-separatist Thomas Jefferson attended them throughout his eight years of presidency.

5. The exhibits include photos from Earth Day, an AIDS rally, various casino grounds and factories, but it does not include photos from monumental religious events such as the National Day of Prayer or the March for Life event, attended by thousands annually, etc.

6. There is an absence of any major display or description of the religious influence within or about the 200-plus year history of the Capitol.

But not everyone is upset with the portrayal of America's religious heritage as presented in the Capitol Visitor's Center. Sandhya Bathija of Americans United For the Separation of Church and State expressed his extreme opposition to the work being done by the Christian Nation crowd. He writes:

The version of American history pushed by Barton and Forbes is their own skewed version. For the rest of us, we have learned since kindergarten that our founding fathers had enough sense to keep religion out of government and government out of religion in order to preserve religious liberty for all.

I’m pleased that the new Capitol Visitor Center hasn’t yielded to Religious Right propagandists. I hope it doesn’t do so now.

In conclusion, here is a Youtube video posted by Senator Jim DeMint, a Republican from South Carolina, and staunch supporter of the Christian right. The video addresses the Senator's specific grievances with the new Visitor's Center and what he would like to see changed:

And here are some parting words from Chuck himself:

America's fathers wholeheartedly believed in the premise stated in Psalm 33:12, which says, "Blessed is the nation whose God is the Lord." But what would they have thought of a nation that removes God from its heritage, classroom instructions, civic ceremonies, buildings, monuments, historic sites, etc.? I believe the words of Thomas Jefferson are as fitting for religious apostasy as they were for slavery, words that were inscribed upon his memorial in Washington, D.C., around 1940: "And can the liberties of a nation be thought secure when we have removed their only firm basis, a conviction in the minds of the people that these liberties are the gift of God? That they are not to be violated but with his wrath? Indeed I tremble for my country when I reflect that God is just: that his justice cannot sleep forever.

-There is no 'ctrl' button on Chuck Norris's computer. Chuck Norris is always in control.

-Chuck Norris can sneeze with his eyes open.

-Chuck Norris destroyed the periodic table, because he only recognizes the element of surprise.

-Chuck Norris can kill two stones with one bird
Posted by Brad Hart at 9:47 AM

Heh. Even as an old man I know Chuck Norris would be able to kick my butt in a fist fight. However, I think I'd wipe the floor with CN in a debate over the FFs and religion.

He has an open invitation on my end. Anywhere, anytime (to debate the FFs and religion that is, not engage in a fist fight).

For starters, many conservatives believe that if they can show that the Founding Fathers were very religious, they thereby also prove that the Founders abhorred separation of church and state...

I don't believe the issue is being laid out here fairly. The separation of church and state is not synonymous with separating religiously-informed conscience from our doings and votes in a democracy/republic.

Two different things entirely: Just like the Founders, I don't want a theocracy because I don't want somebody else's church in charge, nor would he want mine. But on the whole, I'd prefer my representatives in government to share what I value as good.

"Good" can be read here either in the theological or philosophical sense; it doesn't matter. That each of us votes for those candidates who share our values should be uncontroversial.

"The separation of church and state is not synonymous with separating religiously-informed conscience from our ... votes in a democracy/republic."

Do any regulars here dispute this? ("doings" seems a bit broad for either agreement or disagreement.)

Even as an advocate of broad Estab Clause interpretation, I have typically found arguments against this position largely incoherent and thus unconvincing - but would expect to hear better ones here.

I don't dispute it. I share Tom's views on this. I do, however, disagree with Tom on his assessment of Waldman's point made above. I think Waldman is very fair to both sides in this statement and in his book as a whole.