Joseph Galloway on the Supremacy of British Authority 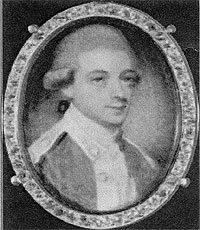 Of the many justifications for going to war, perhaps nothing proved more influential to the American colonies than religion. A countless number of sermons point to the fact that religion played a powerful role in convincing the colonies that war with their "Mother Land" was justifiable and sanctioned by God.

This religious "fever" for war, though thoroughly convincing to the majority, did not convince everyone. Case in point: Joseph Galloway.

Galloway, who was a representative of Pennsylvania to the First Continental Congress, was a passionate voice in favor of American reconciliation with Britain, so much so that his loyalist leanings eventually led him to abandon his home in America and flee to Britain. Before his "treason," however, Galloway campaigned hard for a resolution to the crisis. To add credence to his argument, Galloway, like his pro-independence opponents, used religion to justify his proposals. In his popular pamphlet, A Candid Examination of the Mutual Claims of Great Britain and The Colonies, Galloway offers a gloom-and-doom prophesy on the possible dangers of American independence, which include his fear of a Franco/Catholic incursion into the Americas. He writes:

Do you wish to exchange the mild and equal rule of English customs and manners and your inestimable religion, for the tyranny of a foreign yoke, and the bloody supersticions of popery? Or if you design to give up your present enjoyment of all the blessings of life, for the horrors and distresses of a civil war, and the fatal consequesnces which must ifallibly attend yourselves, and your posterity? Are you still resolved to surrender up your reason to the miserable sophistry and gargon of designing men, and to hazard all these direful misfortunes, rather than be united with your brethren and fellow subjects in Briatian? (62).

In a September, 1774 speech given to the Continental Congress, Galloway continued his pro-British argument by pointing to the "supreme authority" of the British government over their American colonies:

These advocates also assert, what we cannot deny--That the discovery of the Colonies was made under a commission granted by the supreme authority of the British State, that they have been settled under that authority. and therefore are truly the property of that State. Parliamentary jurisdiction has been constantly exercised over them from their first settlement; its executive authority has ever run through all their inferior political systems: the Colonists have ever sworn allegiance to the British State, and have been considered, both by the State and by themselves, as subjects of the British Government. Protection and allegiance are reciprocal duties; the one cannot exist without the other. The Colonies cannot claim the protection of Britain upon any principle of reason or law, while they deny its supreme authority. Upon this ground the authority of Parliament stands too firm to be shaken by any arguments whatever; and therefore to deny that authority, and at the same time to declare their incapacity to be represented, amounts to a full and explicit declaration of independence.

Galloway's insistence on British authority and law is interesting to consider when juxtaposed with the opening verses of Romans Chapter 13 of the Bible:

1 Let every soul be subject unto the higher powers. For there is no power but of God: the powers that be are ordained of God.

2 Whosoever therefore resisteth the power, resisteth the ordinance of God: and they that resist shall receive to themselves damnation.

3 For rulers are not a terror to good works, but to the evil. Wilt thou then not be afraid of the power? do that which is good, and thou shalt have praise of the same:
4 For he is the minister of God to thee for good. But if thou do that which is evil, be afraid; for he beareth not the sword in vain: for he is the minister of God, a revenger to execute wrath upon him that doeth evil.

5 Wherefore ye must needs be subject, not only for wrath, but also for conscience sake.

And to those that questioned Galloway's loyalist reasoning by appealing to the "laws of nature" and "nature's God" to justify their treason, Galloway writes:

We have seen all the American writers on the subject, adopting untenable principles and thence rearing the most wild and chimerical superstructures. Some of them have fixed on, as a source from whence to draw American Right, “the laws of God and nature,” the common rights of mankind and “American charters.” Others finding that the claims of the colonies could not be supported upon these pillars, have racked their inventions to find distinctions which never existed, nor can exist…And after all of them have been fully considered, even the authors themselves, finding that they have conveyed no satisfactory idea to the intelligent of mind, either of the extent of parliamentary authority, or of the rights of America, have exploded them, and taken new ground, which will be found equally indefensible.

For Joseph Galloway and many others, the rampant talk of revolution and independence was not only a frightening upheaval of the status quo, but also a direct violation to God's laws. Great Britain had sovereign and divine authority over its American colonies, and any argument to the contrary was both treason and blasphemy.
Posted by Brad Hart at 1:46 PM

I see Romans 13 here only indirectly: It was becoming a winning argument that an unjust regime was an illegitimate one, and could be overthrown.

I keep touching on this, but the trail of bread crumbs leads from Aquinas to Francisco Suarez to a link I posted recently from Algernon Sidney

that the "divine right of kings" argument per Romans 13 had been discredited by reason.

Therefore, the American revolutionaries had to the "prove" illegitimacy of the English crown's rule. That accounts for the long list of grievances in the D of I.

The hubbub over "taxation without representation" rather mystifies us today, but it was the colonies' best argument. Edmund Burke acknowledges this, as he himself pleads to parliament for a reconciliation in 1775:

"No body of men will be argued into slavery. Sir, let the gentlemen on the other side...tell me, what one character of liberty the Americans have, and what one brand of slavery they are free from, if they are bound in their property and industry by all the restraints you can imagine on commerce, and at the same time are made pack-horses of every tax you choose to impose, without the least share in granting them. When they bear the burthens of unlimited monopoly, will you bring them to bear the burthens of unlimited revenue too? The Englishman in America will feel that this is slavery; that it is legal slavery, will be no compensation either to his feelings or to his understandings..."

[From the Wiki, italics mine]

.
The point, as I see it, was that the monarchy had almost completely ignored the interests of the Colonists ever since the first Pilgrims landed at Plymouth Rock. They were left on their own to sink or swim--to live or die of starvation or whatever.
.
Then!
.
After the king had acquired such deep debt he suddenly decided to impress his will on the Americans with military force and taxation.
.
The American Spirit had already been born. All it needed was a hue and cry. The taxation did it.
.
BAM!! That was it.
.
.