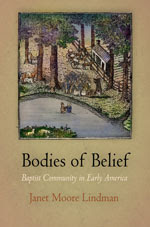 At the Religion in American History blog, Dr. Paul Harvey gives a brief introduction to a new book that is sure to spark the interest of our blog readers. The book is entitled, Bodies of Belief: Baptist Community in Early America, by Janet Lindman of Rowan University. Dr Harvey writes:

The book's main thrust, based on the summary below, appears to go along well with a number of other recent studies of early Baptist bodies, including portions of Charles Irons's Origins of Proslavery Christianity, which we've discussed extensively on this blog before, as well as Jewell Spangler, Virginians Reborn: Anglican Monopoly, Evangelical Dissent, and the Rise of Baptists in the Eighteenth Century. Evangelical democracy is looking less democratic than it used to in the historiography, a healthy corrective I think, and one that accords better with how these early church bodies actually worked in practice, and how they fit into society.

In addition, the University of Pennsylvania Press provides the following introduction to Janet Lindman's book:

The American Baptist church originated in British North America as "little tabernacles in the wilderness," isolated seventeenth-century congregations that grew into a mainstream denomination by the early nineteenth century. The common view of this transition casts these evangelicals as radicals who were on society's fringe during the colonial period, only to become conservative by the nineteenth century after they had achieved social acceptance. In Bodies of Belief, Janet Moore Lindman challenges this accepted, if oversimplified, characterization of early American Baptists by arguing that they struggled with issues of equity and power within the church during the colonial period, and that evangelical religion was both radical and conservative from its beginning.

Bodies of Belief traces the paradoxical evolution of the Baptist religion, including the struggles of early settlement and church building, varieties of theology and worship, and the multivalent meaning of conversation, ritual, and godly community. Lindman demonstrates how the body—both individual bodies and the collective body of believers—was central to Baptist definition and maintenance of faith. The Baptist religion galvanized believers through a visceral transformation of religious conversion, which was then maintained through ritual. Yet the Baptist body was differentiated by race and gender. While all believers were spiritual equals, white men remained at the top of a rigid church hierarchy. Drawing on church books, associational records, diaries, letters, sermon notes, ministerial accounts, and early histories from the Mid-Atlantic and the Chesapeake as well as New England, this innovative study of early American religion asserts that the Baptist religion was predicated simultaneously on a radical spiritual ethos and a conservative social outlook.

Be sure to visit the Religion in American History blog for future reviews of this book! I also hope to provide a review of this book here at American Creation as soon as I find the time to read it (which may not happen until I am finished with grad school). =)
Posted by Brad Hart at 10:27 AM