Those Bloody Papists?: Why, Even the Term "Roman" Catholic Was an English Insult 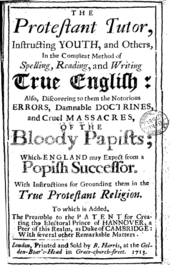 Bloody Papists!
An interesting tidbit I ran across the other day—”Roman” Catholic was a term spread by the English in the 1600s as a pejorative. The church’s name is the Catholic Church, “catholic” of course meaning “universal.”  The English “Protestants” wanted to claim the word “catholic” for themselves, though as we know it didn’t really stick.
The "Four Marks of the Church" that appear in the revision of the Nicene Creed of 381 CE are that the Church is

Well, after Henry VIII takes over the Catholic Church in 1536, it's hardly "one" or "catholic" anymore--unless Henry's is true and the "Roman" one is the fake.  In fact, the Anglican Church's "Thirty-Nine Articles" makes exactly that claim, calling its doctrine "catholic" over 200 times while distinguishing itself from the "Romish" church 27 times.
Which is where all of Protestantism went in its theological claims---"Rome" and its "Papism" is the fake, and Protestantism is the "true religion"---a phrase used countless times by the American founding generation to refer to themselves as opposed to Catholicism.  So whenever you read the term "true religion" in the Founders' documents, now you know what they mean.
Although it may previously have appeared elsewhere sporadically, according to the Catholic Encyclopedia*, "Roman" Catholic came into its now common use in the English-speaking world as a result of the Anglican schism, of circa 1600s British politics.
Who knew?  I bet not even 1 Catholic in 100, let alone everybody else these days.  Stupid bloody papists. They don't even know when they're being insulted!
_____________
*"A study of these and other early examples in their context shows plainly enough that the qualification "Romish Catholic" or "Roman Catholic" was introduced by Protestant divines who highly resented the Roman claim to anymonopoly of the term Catholic. In Germany, Luther had omitted the word Catholic from the Creed, but this was not the case in England. Even men of such Calvinistic leanings as Philpot (he was burned under Mary in 1555), and John Foxe the martyrologist, not to speak of churchmen like Newel and Fulke, insisted on the right of the Reformers to call themselves Catholics and professed to regard their own as the only true Catholic Church. Thus Philpot represents himself as answering his Catholic examiner: "I am, master doctor, of the unfeigned Catholic Church and will live and die therein, and if you can prove your Church to be the True Catholic Church, I will be one of the same" (Philpot, "Works", Parker Soc., p. 132).
It would be easy to quote many similar passages. The term "Romish Catholic" or "Roman Catholic" undoubtedly originated with the Protestant divines who shared this feeling and who were unwilling to concede the name Catholic to their opponents without qualification. Indeed the writer Crowley, just mentioned, does not hesitate throughout a long tract to use the term "Protestant Catholics" the name which he applies to his antagonists. Thus he says "We Protestant Catholiques are not departed from the true Catholique religion" (p. 33) and he refers more than once to "Our Protestant Catholique Church." (p. 74)
On the other hand the evidence seems to show that the Catholics of the reign of Elizabeth and James I were by no
means willing to admit any other designation for themselves than the unqualified name Catholic."
Posted by Tom Van Dyke at 10:27 PM

It is utile short-hand which distinguishes the Latin-rite or Roman-rite or Western Church from the Eastern-rite churches and also from the schismatic ("Orthodox") churches.

"How Did the Catholic Church Get Her Name?

The term Roman Catholic is not used by the Church herself; it is a relatively modern term, and one, moreover, that is confined largely to the English language. The English-speaking bishops at the First Vatican Council in 1870, in fact, conducted a vigorous and successful campaign to insure that the term Roman Catholic was nowhere included in any of the Council's official documents about the Church herself, and the term was not included."

Yeah I learned this from Francis Beckwith. Roman Catholics are supposed to believe that they are the Catholic (that is universal) Church who have a Bishop of Rome termed the Pope.

This one anti-Catholic fundie I used to debate turned it on its head and called it the "Roman" Church without terming it "Catholic." (I think to signify her disbelieve that said church was the universal church).

All of the groups who believe in the Nicene Creed (and that's Catholics, capital O orthodox, Anglicans and most reformed/evangelical Protestants) believe in the "catholic" Church. They just disagree on things like Apostolic succession and the church's actual identity.

SECULARISTS AND THEIR VIEW OF HISTORY

Did you ever notice that secularists accept historical writings as fact, unless they are about God the Father, God the Son and the Holy Spirit.

THE RESULTS OF A SELECTIVE VIEW OF HISTORICAL FACTS.(2 Thessalonians 1:8-9 dealing out retribution to those who do not know God and to those who do not obey the gospel of our Lord Jesus. 9 These will pay the penalty of eternal destruction, away from the presence of the Lord and from the glory of His power.)

Thx for your commercial for yourself, Steve.

Here at American Creation, as students of history we consider "truth clams" about the divine as above our pay grade. We aspire to treat them all the same, as all possibly true but not necessarily so.

For example, there are several Mormon blogbrothers here. They may write about and explain Mormonism, and we consider it rude to attack Mormonism, Joseph Smith, etc. But this is not an endorsement either.

As for the credibility of the Bible, it's a tougher call, since there's little independent evidence to corroborate it--its people and history, let alone its miraculous claims.

In regard to the Founding era, you might find Joseph Priestley interesting--he believed Jesus was resurrected from the dead, but not that he was Divine.

[We take no position on either.]

"In fact, the Anglican Church's Westminster Confession of Faith ...."

"Secularists do deny the historical accuracy of the Bible and all other accounts that proclaim Jesus as the Son of God."

If I can paraphrase the late great Christopher Hitchens' answer to this question.

Secularists don't deny the existence of Plato & Aristotle and in fact wish to read the biblical record exactly as they might read that of the Ancients.

Secularists don't doubt there may have been interpolations in those writings and when the Ancients make claims to the supernatural and miraculous, it's taken with a proper grain of salt.

If we found out that Aristotle really didn't say what was attributed to him on paragraph X in page Y of book Z, that would make for an interesting historical footnote, but probably wouldn't detract from the larger Aristotle picture.

Entire characters who were supposedly interlocutors with Plato, et al. may well have been fabricated for rhetorical purposes.

The reason why we value Plato doesn't depend on the real existence of all of it.

If on the other hand, we make certain similar discoveries about Jesus, it could/would change the game in a more meaningful sense.

Thx--some modifications are necessary. The WCF was drafted for the Church of England, approved by Parliament, but nullified a decade later.

After vigorous debate, the Confession was then in part adopted as the Articles of Christian Religion in 1648, by act of the English parliament, omitting section 4 of chapter 20 (Of Christian Liberty), sections 4-6 of chapter 24 (Of Marriage and Divorce), and chapters 30 and 31 (Of Church Censures and Of Synods and Councils). The next year, the Scottish parliament ratified the Confession without amendment.
In 1660, restoration of the British monarchy and Anglican episcopacy resulted in the nullification of these acts of the two parliaments.

It should read the "39 Articles" that were adopted, "for the apostolical and catholic
doctrine of our church," which is more accurate and proves the point just as fully.

Well, after Henry VIII takes over the Catholic Church in 1536, it's hardly "one" or "catholic" anymore--unless Henry's is true and the "Roman" one is the fake. In fact, the Anglican Church's "Thirty-Nine Articles" makes exactly that claim, calling its doctrine "catholic" over 200 times while distinguishing itself from the "Romish" church 27 times.

My pleasure. The Westminster Confession is mainly connected with Presbyterians. It too speaks of a "catholic" Church, which reinforces the point that belief in the "catholic" Church is a marker of orthodoxy, whether Roman, Orthodox, Anglican or Reformed/Evangelical.

"The terms "Roman Church" and "Roman Catholic Church" date from at least the early Middle Ages, but the stress on these terms became prominent after the Protestant Reformation. The reason was to emphasize the distinctive quality of being not only a Christian, because baptized, but of being a Catholic, because in communion with the Pope."

Thx, JMS. If you have more support for that assertion, I'll probably just yank the article. But right now, many other sources support the thesis.

It is not possible to give an exact year when the Catholic Church began to be called the "Roman Catholic Church," but it is possible to approximate it. The term originates as an insult created by Anglicans who wished to refer to themselves as Catholic. They thus coined the term "Roman Catholic" to distinguish those in union with Rome from themselves and to create a sense in which they could refer to themselves as Catholics (by attempting to deprive actual Catholics to the right to the term).

JMS, I added the phrase

Although it may previously have appeared elsewhere sporadically

That would be accurate, and the thesis remains intact. I'll also scotch "originally" from the title.

Thanks for your contribution.

I'm a bit behind in my reading, but this article caught my attention. Good research on this, Tom.

The phrase "Iglesia Catolica Apostolica y Romana" is used in Latin America. The entry below is in Spanish, but the gist of it is that sometimes people use this phrase now to diferentiate the Catholic church from other churches who hold to the Apostle's Creed, - including the phrase "holy catholic church".

However, what you says gives a lot of insight into why in English we Protestants might use the term Roman Catholic. It has a nasty history, and we can be very nasty. We can also be nice.

Saying Roman Catholic instead of just Catholic makes as much sense as my having to call myself an estadoudinense some places in Latin America - which I do.

Not sure if Roman Catholic has that kind of history in Spanish as well, but possibly. I have only heard Catholics use the full phrase, though. In Spanish, the common terms are Católico, Evangélico, y Protestante - plus Mormón and others. Orthodox is Ortodoxo. Anyway...


Thanks. I love the history of words and phrases. This one is "ouch."