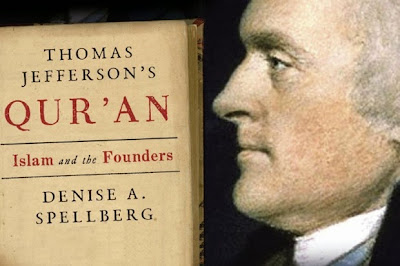 A new book by historian Denise Spellberg explores the possible influence that the Qur'an had on shaping the mind of one of America's most important Founding Fathers (fellow blogger Jon Rowe has referenced it in a couple posts below).

Roughly eleven years before penning the words to the Declaration of Independence, the always curious Thomas Jefferson purchased a copy of the Holy Qur'an and began at least a casual study of the Muslim religion (Jefferson's Qur'an still survives in the Library of Congress).  Jefferson's curiosity about the Muslim religion was originally inspired by one of his heroes, John Locke, who also maintained an interest in studying what was a very mysterious and misunderstood faith for most Europeans of the 18th century.

Spellberg's book does not necessarily suggest that Islam's doctrine helped to establish the American republic, but it does suggest that Islam served as a litmus test of sorts in determining religious freedom in the infant nation.  Spellberg writes:


Amid the interdenominational Christian violence in Europe, some Christians, beginning in the sixteenth century, chose Muslims as the test case for the demarcation of the theoretical boundaries of their toleration for all believers. Because of these European precedents, Muslims also became a part of American debates about religion and the limits of citizenship. As they set about creating a new government in the United States, the American Founders, Protestants all, frequently referred to the adherents of Islam as they contemplated the proper scope of religious freedom and individual rights among the nation’s present and potential inhabitants. The founding generation debated whether the United States should be exclusively Protestant or a religiously plural polity. And if the latter, whether political equality—the full rights of citizenship, including access to the highest office—should extend to non-Protestants. The mention, then, of Muslims as potential citizens of the United States forced the Protestant majority to imagine the parameters of their new society beyond toleration. It obliged them to interrogate the nature of religious freedom: the issue of a “religious test” in the Constitution, like the ones that would exist at the state level into the nineteenth century; the question of “an establishment of religion,” potentially of Protestant Christianity; and the meaning and extent of a separation of religion from government.

In my opinion, this is an appropriate estimation of how Islam influenced the founding of America. Anything more than this would be a gross overestimation of Islam's nominal impact on a founding that was largely secular in nature.

This isn't to say that other historians haven't tried (and failed in my opinion) to connect America's founding doctrines with the Muslim faith.  I've written in the past about a few such attempts that fortunately have not gained any traction in the historical community.  All religions have, at one time or another, tried to connect their faith to the founding of the United States, and Islam is no exception.

As far as Jefferson was concerned, his study of the Qur'an and Islam was not an endeavor to glean pearls of wisdom to help establish a new nation, but rather was a quest to gain understanding. Jefferson never read the Qur'an in order to learn how to create a republic; he was reading it to learn how to defend a republic.  If Islam could become a tolerated and appreciated faith in America, then the religious test of the republic would be a resounding success.  Again from Spellberg:

What the supporters of Muslim rights were proposing was extraordinary even at a purely theoretical level in the eighteenth century. American citizenship—which had embraced only free, white, male Protestants—was in effect to be abstracted from religion. Race and gender would continue as barriers, but not so faith. Legislation in Virginia would be just the beginning, the First Amendment far from the end of the story; in fact, Jefferson, Washington, and James Madison would work toward this ideal of separation throughout their entire political lives, ultimately leaving it to others to carry on and finish the job.

However, according to the Library of Congress

"It appears that Jefferson purchased George Sale’s translation of the Koran in 1765 from the office of the Virginia Gazette. At the time, Jefferson was engaged in his law studies at the College of William and Mary, so it is likely that he purchased the book as an example of Arabic law as his textbooks suggested."

Perhaps Spellberg makes this clear elsewhere, but her essay omits this key fact. The content of Islam is irrelevant to the abstract question of religious pluralism, although as the translation by George Sale [which Jefferson owned] notes, it was certainly valuable in the study of law and civilization:

"If the religious and civil Institutions of foreign nations are worth our knowledge, those of Mohammed, the lawgiver of the Arabians, and founder of an empire which in less than a century spread itself over a greater part of the world than the Romans were ever masters of, must needs be so."

Some quotes on the religious content of Islam here, few or none politically correct.

Brad - thanks for making us aware of this new book. I look forward to reading it.

Yes, these Presidents had copies of the Qur'an, and studied it - and issued a warning that everyone else should read it so they could be aware that these are the types of fanatics that occupy a good portion of the world, that we should be on guard against them, and that they threaten peace and liberty throughout the world. Then we promptly attacked the Barbary Coast and defeated the Muslims that thought their religion entitled them to make war and extort everyone else. Its funny how liberals twist the truth and try to make it seem that the Founding Fathers were as ignorant and / or gullible as they currently are. It had nothing to do with religious tolerance or political correctness or any of the ignorance that liberals try to sell to everybody.