First off, I need to apologize for my very lengthy absence from the blogging scene.  Life can sometimes over...er...underwhelm you, thus making blogging (and many other activities you once enjoyed) go by the wayside.  I am, however, committed to making a comeback tour, so I expect you all to keep me on the straight and narrow from here on out. 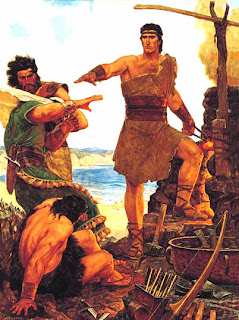 Over the years, one of my favorite topics in all of history has been the ongoing debate over America's founding heritage. Was America founded as a "Christian" nation? And if so, what does that mean? Whose brand of Christianity is the American Christianity? Where does its influence start and end in relation to government? And what exactly is the American "nation?" These are just a few of the many questions that I have had over the course of my studies on the matter, all of which have led me to the conclusion that America's "Christian nation" debate is mostly a debate over semantics. After all, the term "Christian nation" would mean something very different depending on who we are talking to, and how they define "Christianity." A congregation of Jehovah's Witnesses, for instance, would present a very different perspective on the matter than would a congregation of American Evangelicals. Heck, even American Evangelicals would differ on this question depending on where and when in America they live(d).

And when it comes to Christian Nationalism, The Church of Jesus Christ of Latter-day Saints (Mormons) makes for a unique case study to say the least.  Since its inception, the Mormon Faith has held the American founding in higher esteem than arguably any other religion on the planet. It's very origins (in the heartland of the "burned-over District" of New York and at the peak of the Second Great Awakening) essentially demanded that Mormonism wed itself with the idea American providentialism.

One need not find a greater illustration of Mormonism's deep allegiance with American providentialism than the Book of Mormon.  As Mormonism's holiest book of Scripture, the Book of Mormon (in a nutshell) is essentially a story of God bringing a select group of people (Israelites) to a select land (America) in order to establish a select faith (the true gospel of Jesus Christ).  In so doing, the narrative of The Book of Mormon is saturated with references to America being a "choice land" that God himself esteemed "above all other lands."  A few examples:


And inasmuch as ye shall keel my commandments, ye shall prosper, and shall be led to a land of promise; yea, even a land which I have prepared for you; a land which is choice above all other lands. (1 Nephi 2:20) my emphasis.


Notwithstanding our afflictions, we have obtained a land of promise, a land which is choice above all other lands; a land which the Lord God hath covenanted with me should be a land for the inheritance of my seed...and also all those who should be led out of other countries by the hand of the Lord. (2 Nephi 1:5) my emphasis.


And never could be a people more blessed that were they, and more prospered by the hand of the Lord. And they were in a land that was choice above all lands, for the Lord had spoken it. (Ether 10:28) my emphasis.

Unlike the Hebrews of the Bible, the "Promised Land" of Mormonism is not so much Jerusalem or Israel but America.  Of course, that isn't to say that Mormons don't revere the Holy Land (the contrary is actually the case.  Mormons have a deep love for Jerusalem, as evidenced by their commitment to the BYU Jerusalem Center). But there can be no doubt that America holds the pole position when it comes to being a "choice land...above all lands."  From a few former Mormon Presidents:


"The Constitution of the United States is a glorious standard; it is founded in the wisdom of God. It is a heavenly banner; it is to all those who are privileged with the sweets of liberty, like the cooling shades and refreshing waters of a great rock in a thirsty and weary land. It is like a great tree under whose branches men from every clime can be shielded from the burning rays of the sun." -Joseph Smith

"I want to say to every man, the Constitution of the United States, as formed by our fathers, was dictated, was revealed, was put into their hearts by the Almighty, who sits enthroned in the midst of the heavens; although unknown to them, it was dictated by the revelations of Jesus Christ, and I tell you in the name of Jesus Christ, it is as good as I could ask for." -Brigham Young

"Those who laid the foundations of this American government and signed the Declaration of Independence were the best spirits the God of Heaven could find on the face of the earth.  They were choice and noble spirits before God." -Wilford Woodruff

And from The Doctrine and Covenants (another canonized book of scripture of the Mormon faith):


Therefore, it is not right that any man should be in bondage one to another. And for this purpose have I [God] established the Constitution of this land, by the hands of wise men whom I raised up unto this very purpose, and redeemed the land by the shedding of blood (Section 101:79-80).

And if this isn't enough proof of Mormonism's deep roots in American providentialism, let us return to the Book of Mormon. In the First Book of Nephi (Chapter 13), we read of a remarkable vision that Nephi (one of the first BoM prophets) experiences. Nephi, who allegedly lived in 600 B.C., is shown by an angel the discovery of the New World, the migration of the European nations to the "promised land," and the establishment of the United States: 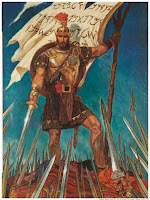 13 And it came to pass that I beheld the Spirit of God, that it wrought upon other Gentiles; and they went forth out of captivity, upon the many waters.

14 And it came to pass that I beheld many multitudes of the Gentiles upon the land of promise; and I beheld the wrath of God, that it was upon the seed of my brethren; and they were scattered before the Gentiles and were smitten.

15 And I beheld the Spirit of the Lord, that it was upon the Gentiles, and they did prosper and obtain the land for their inheritance; and I beheld that they were white, and exceedingly fair and beautiful, like unto my people before they were slain.

16 And it came to pass that I, Nephi, beheld that the Gentiles who had gone forth out of captivity did humble themselves before the Lord; and the power of the Lord was with them.

17 And I beheld that their mother Gentiles were gathered together upon the waters, and upon the land also, to battle against them.

18 And I beheld that the power of God was with them, and also that the wrath of God was upon all those that were gathered together against them to battle.

19 And I, Nephi, beheld that the Gentiles that had gone out of captivity were delivered by the power of God out of the hands of all other nations (1 Nephi 13:12-19).

The Book of Mormon goes on to relate how these chosen people, once established on the chosen land, went on to establish a government that, on the surface, appears to resemble the one established by America's founders.  This connection, however, is superficial and does not take into account many of the nuanced references made in the story itself.  As Mormon Historian and acclaimed Joseph Smith Biographer, Richard Bushman states:


The Book of Mormon can be read as a nationalistic text.  The book gives the United States a deep past, reaching back centuries beyond any known history of the continent to 600 BCE and through the Jaredites even further back to the Tower of Babel, millenia before Christ.  Embedding America in the Bible necessarily hallowed the nation, but The Book of Mormon also created a subversive competitor to the standard national history.

But the American story does not control the narrative.  The Book of Mormon allots just nine verses to the deliverance of the Gentiles, and the rest of the book concentrates on the deliverance of Israel.  The impending American republic is barely visible...Book of Mormon governments are monarchies and judgeships, Old Testament governments, not democratic legislatures and elected presidents (Rough Stone Rolling, Chapter 4).

Regardless of how the Book of Mormon narrative is interpreted by both skeptics and believers, what is clear is that Mormons of virtually every generation have adopted the aforementioned references (and many others like them) as evidence for America being the supreme stage in God's human drama (***I have even written in the past about one generation of Mormons who went so far as to "convert" America's founders to Mormonism via the doctrine of vicarious baptism***).

And today's generation of Mormons is no different.  Current Latter-day Saint leadership has made the doctrine of American providentialism and religious freedom a top priority.  Here is a short clip from Mormon Apostle L. Tom Perry:


And a video on religious freedom released just last month by the church:

Born out of America, with doctrinal roots in America (both modern and believed to be ancient), there can be NO DOUBT that Mormons make the strongest claim for American Providentialism. Nobody else even comes close.

Great to see you back. And I like the new format. (Never really cared for the now old one.)

Hi Brad, good to see you back in these parts.

Great to see you, BH. "Providential history" is an interesting albeit contentious field.

Dear BH: What you say about the LDS church’s assertion of “American exceptionalism” may be true, but why does it matter, especially if neither the claim nor the prophecy is supported by the facts?

As someone who studies and teaches a bit of American Indian history, I am bemused by the LDS leaders and apologists who still will not accept the fact that to date DNA research lends no support to traditional Mormon beliefs about the lost tribe of Israel origins of Native Americans, and applaud other Mormon scholars who disagree with their church leaders, teachings and the Book of Mormon.

Since Ronald Reagan’s “morning in America” antidote to Jimmy Carter’s “crisis of confidence malaise, “American exceptionalism” has become a prophylactic for right-wing politicians to boast about the supposed superiority of the U.S. as a way of deflecting criticisms of domestic or foreign policy, while asserting America’s greatness (we’re #1; we’re #1), whatever the facts.

It matters because, like it or not, Mormonism is one of the fastest growing religions in America. With 15 million strong, their viewpoint (whether valid or not) deserves to be studied.

As for your assertions about Native American DNA proving the Book of Mormon false, I don't think this is the forum for such a discussion. But, for the record, such an assertion on your part reveals just how little you truly understand Mormonism and the Book of Mormon in particular. This is not a black and white issue.

Brad - I wasn't arguing that the LDS "viewpoint" should not be "studied." I was merely stating that any person's or group's assertion of "American exceptionalism" does not make America exceptional.

I am no expert on Mormonism. I was merely citing some recent scholarship which concludes that:

"The LDS Church could end the controversy by making an official statement regarding the lineage of the Lamanites; however, this seems unlikely. In an attempt to calm the concerns of its membership, the church has published several articles on the DNA issue on the official LDS Church Web site. The Web site is clear to point out, however, that the articles “are not official Church positions or statements.” Until the church decides either to defend or denounce comments from its leaders, members who try to be as intellectually consistent as possible in their faith will continue to face the dilemma of believing either science or “latter-day revelation.”