Paul Revere, the "Immersion" of Jesus, and the Complex Nature of Early American Religion 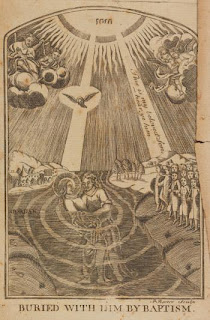 This past month, officials with the Library Preservation Department of Brown University uncovered a rare engraving (seen on the left) from our nation's founding period, which I believe illustrates the complexities of early American religion.  This engraving, which was completed by none other than Paul Revere, is a depiction of the baptism of Jesus Christ by John the Baptist.  As you can see, the engraving illustrates Christ's baptism as being done through immersion.

Paul Revere was well known in his day for several of his artistic engravings, the most famous of course being his depiction of the Boston Massacre.  As an artisan, silversmith and dentist by trade, Revere was exceptionally gifted with his ability to create these artistic engravings, all of which helped to gain him notoriety during the early years of the American Revolution.

But this particular engraving of Christ's baptism is noteworthy not just because of the artist who created it, but because it also sheds light on some interesting aspects of early American religion and the personal creed of Paul Revere himself.  As the son of a very devout French Huguenot who had immigrated to Boston, Revere was raised in a very devout Protestant home.  The family's primary loyalty rested with Christ's Church (Old North Church) where the children were raised in the traditional orthodoxy of their day.

And though orthodoxy was an important component in the lives of many early American colonists, the sweeping tides of the First Great Awakening had brought about new ideas regarding humanity and its place with the divine.  For a young and intelligent boy like Paul Revere (who seemed to have an inherent attraction to revolutionary ways of thinking) these new ideas seemed to strike a chord.  Though originally drawn to the teachings of the Church of England, Revere eventually began to align himself with the West Church, and its controversial pastor Jonathan Mayhew.  Mayhew's provocative brand to preaching, particularly his support of resistance to civil authority and opposition of British "tyranny" had earned him a large number of supporters within the Boston area, particularly the young fifteen-year-old Paul Revere.

Needless to say, Revere's newfound faith did not sit well with his extremely orthodox father.  In fact, Revere's decision to give ear to the radical Mayhew ended with him being on the receiving end of a severe beating at the hand of his father, which caused the young lad to "repent" of his error and return to his family's church (though he stayed close friends with Mayhew).  But it wasn't Mayhew's political views that angered Revere's father.  According to Joel Miller, author of the book, The Revolutionary Paul Revere, Revere's father wasn't upset over Mayhew's political rhetoric but rather over his "heretic" teachings:

Mayhew's politics weren't as radical as they might seem. Mayhew was speaking from what was by then a long tradition of civil resistance, primarily from the Calvinists. While John Calvin himself opposed rebellion, his Huguenot heirs in France penned treatises defending it: François Hotman, Theodore Beza, and Phillipe du Plessis-Mor-nay and his famous Vindiciae Contra Tyrannos. Ditto for Calvin's Puritan heirs like George Buchanan, Samuel Rutherford, and John Ponet. These writers shaped Puritan and Huguenot ideas about civil power and rights and were hardly radical to those standing in their stream. John Adams spoke glowingly of them. "The original plantation of our country was occasioned, her continual growth has been promoted, and her present liberties have been established by these generous theories," he wrote, specifically referring to Ponet and the Vindiciae.
All this matters because Paul's family was Calvinist. His dad was a Huguenot refugee from France and married into a Puritan family in Boston. Mayhew's politics wouldn't have been radical to him at all, and preachers all over Boston echoed Mayhew's political sentiments. The problem for Revere's dad was the rest of Mayhew's theology. Mayhew was a winsome, exciting preacher -- and also a heretic. He denied some basic Christian teachings, such as the Trinity. From my reading, Paul got the beating for lending ear to a heretic. Mayhew's politics were actually pretty orthodox for their time and place, which was one of the reasons Boston so quickly fell into their resistance against England. (My emphasis).

It was Mayhew's infamous unitarianism, mingled with Christianity, that angered Revere's family so much.  Resistance to some distant king or some foolish tax was one thing, but resistance to the Holy Trinity or God's one true faith was quite another.  This is why I find the engraving above to be of such interest.  As already mentioned, Revere was raised to embrace a very orthodox view of Puritan Christianity.  As a result, one has to wonder why Revere chose to depict the baptism of Jesus as being one by immersion, when the Puritans/Congregationalists taught baptism by sprinkling (particularly at infancy).  Could it be that Revere was once again challenging the faith of his father?
Of course, it is difficult to say with absolute certainty why Revere chose to make this engraving.  Perhaps, like many others of his faith, he believed that Jesus was baptized by immersion but that the same was not needed for his followers.  Or perhaps he was simply trying to profit from the growing revivalism in the early years of the Second Great Awakening.  After all, we know that Revere had profited handsomely from the growing demand for church bells, becoming America's best-known bell caster.  Could engravings like these also been the result of his desire to make an extra buck?

I don't think so.  First off, this engraving is only one of five known in existence today.  In addition, there is zero evidence that the engraving was published in any of the books or pamphlets of the time.  Instead it appears that Revere made a relatively small number of these engravings and sent them to close associates.  As a result, it would stand to reason that these engravings were more for sentimental value than anything else.  This makes sense when we consider the fact that Revere elected to further his studies of "infidel" Christianity at the hands of Mayhew and others.

With that said, it is important that we be careful not to classify Paul Revere as a unitarian, closet unitarian, etc.  Revere maintained a very close alliance with Congregationalism throughout the course of his adulthood.  Boston's New Brick Church was like a second home to Revere, as he was a regular in Sunday church services.  Clearly Revere maintained a love for his family's orthodox faith.  As a result, I have no problem with those who wish to classify Revere as a devout disciple of Christian orthodoxy.  With that said, I do think that these apparent "heathen" blips on the radar are noteworthy because they reveal the fact that almost nothing about early American religion (or any religion of any era for that matter) is cut and dry.  Like many of his time, Revere was questioning and thinking about matters of faith.  Was God really the totality of an obscure Trinity?  Is infant baptism/baptism by sprinkling really a requirement for heaven?  Is there really such a thing as "the one true faith?"  In the end, these are questions that are just as relevant today as they were 200 or 2,000 years ago, which proves that Paul Revere was a pretty stereotypical Christian of his time.
Posted by Brad Hart at 4:42 PM

Thx for this, Brad. I googled "paul revere" and "unitarian" last week and got a zillion hits. Yet you say it's not certain he was one. I have no idea what to believe anymore.

And thx for this part, which to me is the most important [and BTW, Theodore Beza was Jean Calvin's immediate successor]:


While John Calvin himself opposed rebellion, his Huguenot heirs in France penned treatises defending it: François Hotman, Theodore Beza, and Phillipe du Plessis-Mor-nay and his famous Vindiciae Contra Tyrannos. Ditto for Calvin's Puritan heirs like George Buchanan, Samuel Rutherford, and John Ponet. These writers shaped Puritan and Huguenot ideas about civil power and rights and were hardly radical to those standing in their stream.

.
Brad, thanks for publishing that informative piece. You have given me an image of Paul Revere I never have had. Your short paper is very welcome.
.
Can you imagine? A father severely beating his son expecting that the child would repent in his heart of hearts?
.
That's the drill.
.
Burn 'em alive at the stake so they can see what Hell is all about.
.
What a weak minded ideology.
.

Thanks for this. I'll admit Revere is someone on whom I have to do more homework before I can draw conclusions. But your post is a good start.